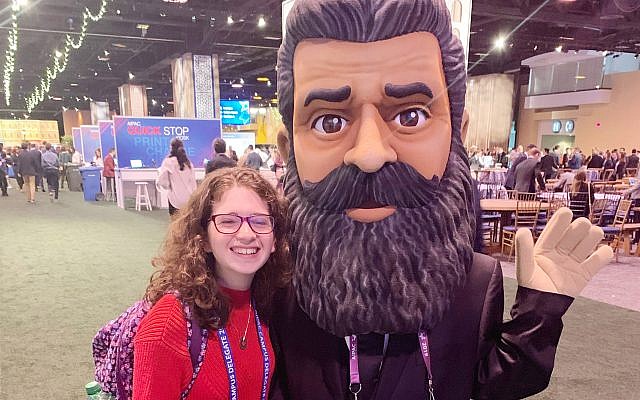 The author smiles for a photo with a Theodor Herzl character at the AIPAC Policy Conference in March. Credit Liora Finkel

I attend Muhlenberg College, a small liberal arts college with approximately 30 percent self-identifying Jewish students. While there is no talk of any major anti-Israel activity on campus, there are a few faculty members with personal ideologies tinged with anti-Israel sentiment. So it is in many liberal arts schools. All in all, a Muhlenberg student sensitive to large-scale anti-Israel sentiment can easily live in the “Muhlenbubble” without feeling unsafe or intimidated.

Outside of my small corner in Pennsylvania, I see that progressive Zionism is still alive, though its supporters have sometimes been accused of being anti-Israel or of not being nuanced enough about Israel’s plight. In Israel and around the world, progressive Zionists are applying progressive ideology to Israel as a geopolitical entity.

Unfortunately, in America the loudest progressives speaking about Israel are criticizing it contemptuously, while other progressives are voicing their criticisms of Israel more lovingly. At the AIPAC Policy Conference in March, in one of the general sessions I attended, Rep. Steny Hoyer (D-Md.), the No. 2 Democrat in the House, exemplified this, saying, “Together, we cherish dissent and value criticism of leaders and policies. … It’s what makes our democracies stronger.” He emphasized that most Democrats in Congress are pro-Israel, stating: “There are 62 freshman Democrats [in the House] — you hear me? Sixty-two, not three.” His message was that the very vocal, anti-Israel progressives are the minority.

In a world filled by headlines and soundbites, the news we absorb tends to magnify issues that aren’t real, and because so many things are oversimplified, they are presented without nuance. Israel is not as much of a hotbed of disagreement in our government as we have been led to think, nor are our representatives as anti-Semitic as some are led to believe. The world we see through a screen or in print is a caricature of the real world; it itself is not real.

Progressive Zionism is not an exception to the rule that Zionists unconditionally love Israel; all Zionists have the right and ability to criticize Israel’s policies in an informed and nuanced manner. The main thing separating progressive Zionism from other streams of Zionism is the application of progressive values onto Israel. For example, I acknowledge the human rights violations and Palestinian struggles in Gaza and the West Bank, however, I know Israel is not entirely at fault, and no single action is going to resolve the situation. It’s important for progressives, who are too often labeled anti-Israel, to express how much pride we have in Israel as a democracy and as the Start-up Nation, among other things.

As a liberal and as a progressive, it is frustrating to always be worried about the reactions of my progressive peers (many of whom may not be very knowledgeable about Israel) when I state that I support AIPAC and/or that I support Israel. It’s equally frustrating to be worried about what my Zionist peers will say when I state that I’m a liberal. It’s upsetting to feel that I need to choose either “team progressive” or “team Israel.”

I don’t agree with all of the policies AIPAC supports and drafts, but I understand that the best way to be a pro-Israel American is to align with them as the largest and perhaps most effective group. This isn’t to say one should only align themselves with AIPAC, but rather that there is strength in numbers; strength as a united, pro-Israel American front, and also as a representation of the majority of progressive pro-Israel Americans. I assure you it is possible, and I encourage, if you so desire, to be a supporter of both J Street, the dovish lobby group, and AIPAC.

By supporting both AIPAC and J Street, a progressive Zionist can support a more specific and progressive agenda while also being a part of a larger pro-Israel community. Personally, the bipartisan environment at AIPAC calmed most of my progressive, pro-Israel anxieties, including the Democratic Party’s overall stance on Israel. I’m unsure if I would feel this way if I were affiliated exclusively with a different organization.

All in all, we progressives need and deserve to be included at the pro-Israel and progressive tables. No progressive American Zionist deserves to be scared to bring up being a progressive or pro-Israel. Regardless, it is unlikely any one perspective will provide the solutions to the many issues facing Jews and Arabs, Israelis and Palestinians. Our opinions are really about people’s life experiences. All the players in these conflicts have faced hardships. This is not a competition. No matter whose “team” we are on, the least we can do is discuss, debate, struggle and act with their dignities and livelihoods in mind. That is the progressive way.

Liora Finkel is a rising sophomore at Muhlenberg College.