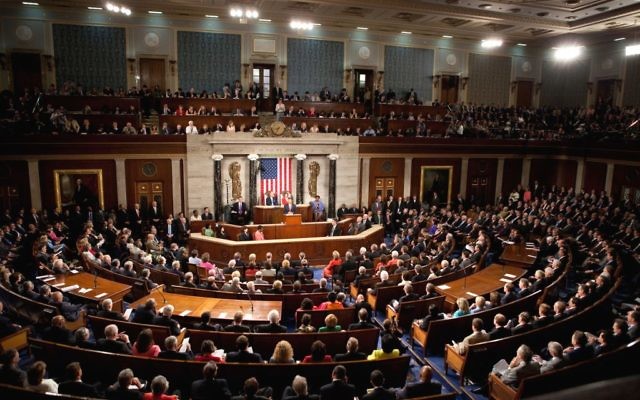 Illustrative photo of a joint session of Congress in 2016. Wikimedia Commons

It was something of a setup. When Republicans pushed for passage of an anti-BDS (boycott, divestment and sanctions) bill in the Senate earlier this month, the point of the exercise was to put Democrats in a box on Israel. They could support the bill and thereby mollify the pro-Israel community, or they could refuse to do so because of their unwillingness to pass anything during the government shutdown and be accused of being pro-BDS.

Unsurprisingly, given the state of war that exists between Democrats and President Donald Trump, they chose the latter. Equally surprisingly, their refusal to back the bill prompted Sen. Marco Rubio (R-Fla.) to accuse them of supporting BDS.

That was a cheap shot on Rubio’s part. Many Democrats saw it as just another instance of the GOP trying to politicize support for Israel.

That’s an accusation that Democrats have been leveling at Republicans since Ronald Reagan. Their point is that since the best thing for Israel is to maintain a solid bipartisan consensus on the issue, seeking to use it as a wedge issue in order to win votes actually harms the Jewish state rather than helping it.

In principle, they’re right. Permanently linking U.S. support for Israel to the fortunes of either major party would be a disaster. That’s become more of an issue because of the close ties between Prime Minister Benjamin Netanyahu and President Trump. At some point, the Democrats will be back in charge of the White House, and no one should want that to automatically mean a chill in relations between the two democracies.

But, as with the debate about the anti-BDS bill, the problem here isn’t so much bad judgment on Netanyahu’s part or GOP gamesmanship as it is the changing nature of the Democratic Party. As the party shifts to the left and intersectional ideology — which holds that the fight for civil rights in the United States is linked to the Palestinian war on Israel — its ranks have increasingly been filled by those who are either critics or outright foes of the Jewish state.

Two of the stars of the Democrats’ successful 2018-midterm campaign were Reps. Rashida Tlaib of Michigan and Ilhan Omar of Minnesota. Both are supporters of BDS and each has been credibly associated with anti-Semitic smears. Yet while Democrats seek to link Trump to anti-Semitism despite his close ties with Jews and exemplary support for Israel, they have largely ignored the problems in their own party.

It was telling that in the same week that Republicans finally disciplined Rep. Steve King (R-Iowa) by stripping him of all his committee assignments Democrats rewarded Omar with a spot on the House Foreign Affairs Committee. While Omar’s influence will be minimal compared to that of its chairman, pro-Israel stalwart Rep. Eliot Engel, it still gives the pro-BDS crowd a platform.

Omar and Tlaib are just the tip of the iceberg. The Women’s March, which was a focal point of the anti-Trump “resistance,” is led by people like Tamika Mallory, a fan of the Nation of Islam’s Louis Farrakhan, and Linda Sarsour, a hardcore opponent of Israel and supporter of BDS. While the Democratic National Committee and many other responsible liberals have correctly decided that they can’t allow association with any group so tainted by anti-Semitism, others — like New York Sen. Kirsten Gillibrand — are sticking with them. That Gillibrand thinks doing so won’t harm her chances of winning the 2020 Democratic presidential nomination tells you all you need to know about the way the wind is blowing these days.

While it was plausible to claim that Netanyahu made the Iran nuclear deal a partisan issue with his maneuvers targeting President Obama, the failure of most Democrats to challenge their leader’s decision to appease Tehran made it inevitable that their party would be linked with a stand most Israelis abhorred. The same is true for the Democrats’ failure to support Trump’s stand on Iran and moving the U.S. embassy to Jerusalem. Under those circumstances, it’s hardly fair to blame Israelis for their affection for the president and the GOP.

Nevertheless, support for Israel is still strong among the congressional Democratic leadership. But polls consistently show that Republicans are more supportive of Israel than Democrats. With the growing influence of the intersectional left, that gap won’t be bridged.

The challenge for pro-Israel Democrats isn’t so much whether Republicans are embarrassing them as it is a matter of whether the anti-Israel left will continue gaining ground. Rather than focus on GOP tactics, they need to fight for the soul of their party.

Jonathan S. Tobin is editor in chief of JNS.org and a contributor to National Review.