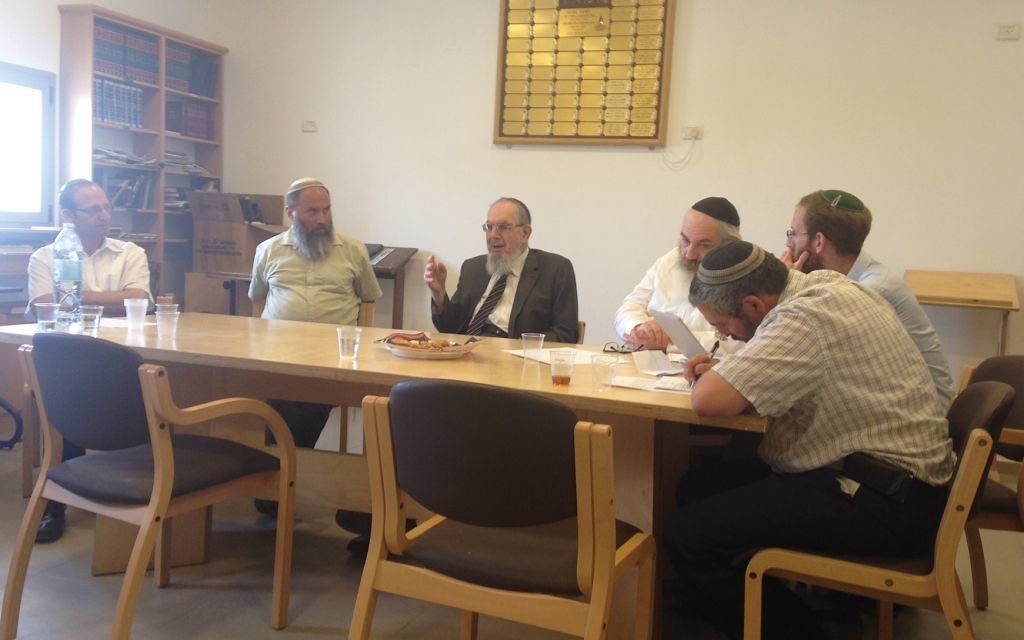 Tel Aviv — Growing up in Belarus, Natya was considered Jewish because of her Jewish father — the son of Holocaust survivors.

But ever since immigrating to Israel six years ago, she has been considered a non-Jew by religious and governmental authorities because of her non-Jewish mother. Though converting to Judaism would allow her to rectify the anomaly for her and her child, the demands of Israel’s Chief Rabbinate were so onerous that Natya — like most of some 350,000 other former Soviet immigrants — preferred to remain in a bureaucratic limbo with her religion undefined.

“I didn’t even try to start,” said Natya, who requested that her real name not be used. “They are doing all of this coercive stuff, and making it more complicated rather than making it easier.”

Last week however, she and her 4-year-old daughter underwent a potentially groundbreaking Jewish conversion ceremony: the conversion was outside the auspices of the Chief Rabbinate, though it was endorsed by several leading Orthodox Israeli rabbis.

The so-called “private” conversion track was unveiled last week despite the pique of the Israeli government religious establishment, touching off a storm of criticism within Orthodox Jewish circles. Mainstream Israeli media dubbed the move a “rebellion.”

Proponents of the move say the conversion court is necessary for Russian immigrants because the rabbinate’s conversion process has so far failed to provide a solution that would allow a large part of Israel’s population to become part of the Jewish people. After fighting for decades to allow Soviet Jewry to immigrate to Israel, Israel needs to take more far-reaching action to make it easier for immigrants to become recognized as Jews, they say.

With marriage and burial in Israel performed by Orthodox religious authorities, easing the obstacles toward conversion is a moral obligation, according to Rabbi Seth Farber, whose nonprofit organization, Itim, worked with prominent figures like Rabbi David Stav and Rabbi Shlomo Riskin to spearhead the establishment of the private conversion court.

“We’ve created leverage against the rabbinate. We said, ‘If you are not going to solve this problem, we’re going to solve it. It’s not only about ideology, it’s about action,’” he said.

The conversion court initiative has come under withering criticism — not only from ultra-Orthodox authorities who dominate the Rabbinate, but also within the mainline Religious Zionist community. Rabbi Haim Druckman, former director of Israel’s conversion authority and a leading religious Zionist rabbi, called the move an act of “lawlessness.”

“We must not go down this path — it would mean a devastating blow to Judaism and Torah in the country,” Rabbi Druckman said in an interview with Ynet news. “I don’t take issue with the conversion court’s Torah practices, the rabbis are genuine, but if you privatize conversions, then tomorrow a Reform court will be established. I am in principle opposed to privatization of anything connected with the issue of Judaism.”

Israeli religious leaders have grappled with the question of how to treat Russian-speaking immigrants who aren’t Jewish according to traditional religious law, but they’ve so far failed to craft a framework that would appeal to a community that is mostly secular. In the early part of last decade, the government established an educational program and conversion course for army soldiers. Proponents of the private court system say they decided on the move only after efforts at reform through legislation and government decision failed in the last year.

“My intention is not to defy the rabbinate. I was involved in the movement for Soviet Jewry … I became very close to the Russian Jews,” said Rabbi Shlomo Riskin, the chief rabbi of Efrat and the founder of New York’s Lincoln Square Synagogue.

“After fighting so hard to bring them to Israel under the Law of Return, there are now 350,000 who arrived who are Jewish paternally but not maternally. Individuals came to me after difficult stories about roadblocks they had. There are a large number [of conversion courts] that aren’t being run as they should be. That’s what made me see a ticking bomb problem in Israel.”

The new court system — dubbed “Giyur K’halacha,” or Halachic Conversion — was set up to ease the conversion process for 100,000 pre-adolescents. Current state-dominated courts require the parents and children to lead a fully religious lifestyle, but rabbis involved with the new conversion network said they will not make the same demands. They say their goal is to match the conversion numbers of the Rabbinate’s courts within 18 months. Such a critical mass would eventually force the Chief Rabbinate to recognize the conversions, they argue.

Will the new conversion court system draw immigrants and their children? Though the break with the Rabbinate is unprecedented, many Israelis say that the shift might be too little too late.

“In symbolic terms, with regard to the bond between religion and state in Israel, this is a genuine earthquake. A group of religious Zionists who stood for idea of a centralized Chief Rabbinate are now parting ways,” said Rabbi Uri Regev, a Reform Rabbi and the head of the nonprofit Hidush, which advocates for religious pluralism in Israel. “In regard to conversion and the need to convert hundreds of thousands of immigrants, its significance is exaggerated.”

News of the establishment of the conversion court got extensive coverage in Israel’s Russian-language media, said Roman Yanushevsky, an editor for Israel’s Russian television news broadcast. Despite the interest, Yanushevsky sounded ambivalent about whether immigrants would embrace the court as a solution.

The overwhelming majority of Russian Jews are secular and have soured on the Orthodox religious establishment, which it sees as coercive. That said, there is a respect for Jewish culture and a desire to feel like they are not second-class citizens in Israel.

“They want to live more integrated into Israeli society, rather than live in Mea Shearim,” he said, referencing Jerusalem’s large charedi neighborhood. “Some people are scared to go to the ultra-Orthodox system, there are rumors that they come to check on houses and look in your refrigerators.”

Yanushevsky, a self-described cultural Jew whose mother is not Jewish, said that he started a conversion process while in the Israeli army but dropped out. He said he is unsure about whether he would seek a conversion through the new court.

“Logic says this new court will be more liberal than the Chief Rabbinate, if I can use the world ‘liberal,’” he said. “But they are still Orthodox and they will expect me to become more observant, that is for sure.”

After undergoing the new conversion process, Natya sounded more upbeat. Despite the insult at being treated as a second-class citizen — “When my grandfather was in a concentration camp,” she said, “Hitler didn’t ask him if he had 100 percent Jewish blood” — she remains optimistic about the prospects for change. The private conversion courts give her hope more immigrants will follow her lead, forcing the Chief Rabbinate to change its view.

“I’m telling all my friends about it, people have been dreaming about it all their lives,” she said. “I think eventually Israel will have to recognize it.”