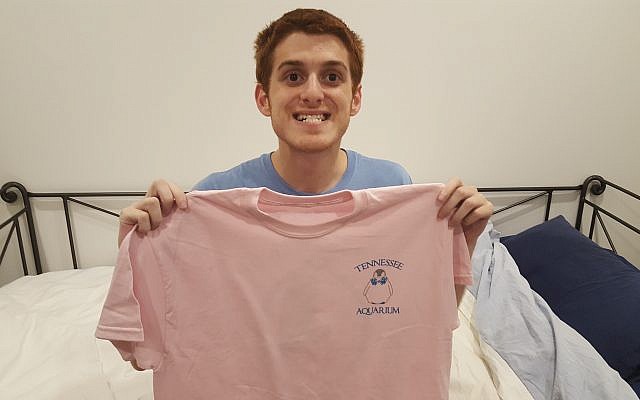 The author's son and his t-shirt. Courtesy of Nina Moglinik

At the end of a really lovely tour through the Tennessee Aquarium in Chattanooga—a place my son Noah had been asking to visit literally for years—we found ourselves in the gift shop. Noah headed straight for the t-shirts, and found one in his size, adult medium. It was pink. “Pink is for girls,” I foolishly said. “No it’s not,” Noah politely challenged me. “Well, usually it is,” I stupidly continued. “But it’s my size.”   Since there were no other adult medium t-shirts to be had in the gift shop that day, I finally told Noah that he could get that one if he wanted it.

I knew my comments about pink t-shirts and girls were ridiculous. They were reflexive really, and honestly embodied a maternal concern that a young man who already has so many struggles in his life not stand out or be picked on for some truly superficial reason. But I relented because it mattered to Noah, and I hoped that his wearing pink would never be an issue.

When we got back to our hotel room, Noah did something that I found amazing. He cannot, in my understanding of him, make sense of gender—or discuss the concept in any” typical” way—but I found him searching on his Ipad for images of men wearing—you guessed it—pink t-shirts. And of course he found them. “Look mommy, see. Pink t-shirts.” “Yes Noah, I see. You’re right. Men do wear pink t-shirts.” And that, I thought, was the end of that.

The next day, we found ourselves in the airport in Nashville, waiting for our flight home. We were sitting in the gate area when I heard Noah say, “Look mommy. A pink t-shirt.” I turned, followed Noah’s pointing finger, and saw a man wearing a dark pink t-shirt.

I’m grateful beyond words to the child who proved his momma a fool, one who was clinging, even protectively, to stereotypical notions of what’s available to whom in this world. And for once, the internet proved an aide to my parenting, allowing my son to find the visual explanation for the words he lacks, to teach me what I got wrong. To the man in the airport wearing the pink t-shirt, is it ok if I say that I thought you looked awfully pretty in pink? And I know my son will too…

Nina Mogilnik’s professional career has encompassed work in the philanthropic, nonprofit and government sectors. Nina serves on the board of Birch Family Services, an organization dedicated to educating and supporting into adulthood individuals with a range of developmental disabilities. Nina is also an avocational writer, and has had a number of essays about her experiences dealing with her father’s Alzheimer’s and her son’s autism published in Haddasah Magazine and in The Jewish Week.  She was recently invited to blog for The Times of Israel and has been contributing her take on life and current events.  Nina’s proudest accomplishment — and hardest job by far — has been as a mother. Nina has degrees in philosophy from Union College (B.A.) and from the University of Chicago (M.Phil). She lives with her husband and kids (human and canine) in New York City.