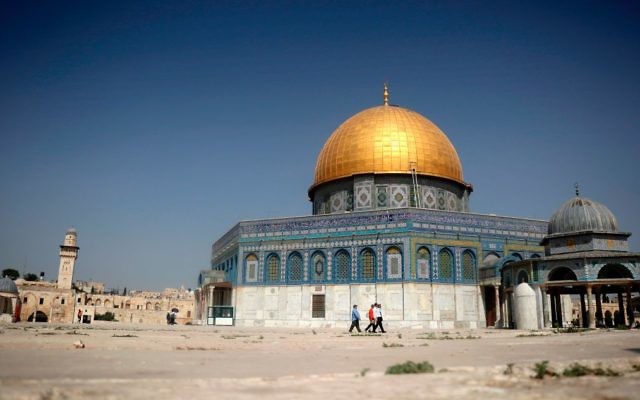 A shootout at the Temple Mount last week has spurred a showdown between Israel and the Palestinians over metal detectors at the Jerusalem holy site, and sparked tension within the country’s Arab minority.

The Old City plaza, revered by Jews and Muslims, was shuttered to worshippers and tourists alike after three Israeli Arabs used improvised machine guns to kill two Israeli Druze policemen on duty last Friday morning and were then killed by police.

The re-opening of the esplanade this week should have defused emotions after Friday prayers were cancelled for the first time in decades. But the new equipment fanned criticism that Israel had unilaterally changed the site’s delicate “status quo” of rules regarding religious worship and tourist visits.

A Palestinian government statement called the security measures “null and void” and “a violation of the sanctity of the Al Aqsa Mosque.” Officials from the Muslim Waqf called the metal detectors a “severe” and “aggressive” restriction on worshippers, and urged worshippers not to pass through them in protest. 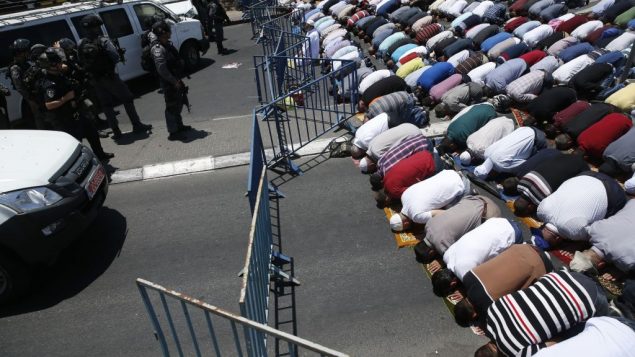 Muslim worshippers perform the traditional Friday prayers on a street outside the Lion Gate after access to Al-Aqsa Mosque was temporarily blocked following the shooting on July 14, 2017. Getty Images

The metal detectors were set up at the Old City’s Lions’ Gate and the Majlis Gate — two main points of entry for Muslim worshippers on their way to the mosques that sit on the Temple Mount. Instead of passing through the metal detectors, worshippers held prayer services steps away from the metal detectors and security officers. On Monday night, the demonstrations became violent and rioting spread to other neighborhoods in east Jerusalem.

“The [violent] response only convinces me. We will do whatever is necessary to prevent the killing of the innocent and police,” he said in an interview with Israel Radio. “Security measures are part of our routine, and part of our reality. They exist everywhere — we don’t even notice it. A murder on the Temple Mount is something new.”

On Friday morning, three men from the Israeli Arab city of Umm el Fahm ambushed two Israeli policemen with homemade machine guns. As the attackers retreated to the Temple Mount, a shootout ensued with police, making the holy plaza look and sound like a war zone. 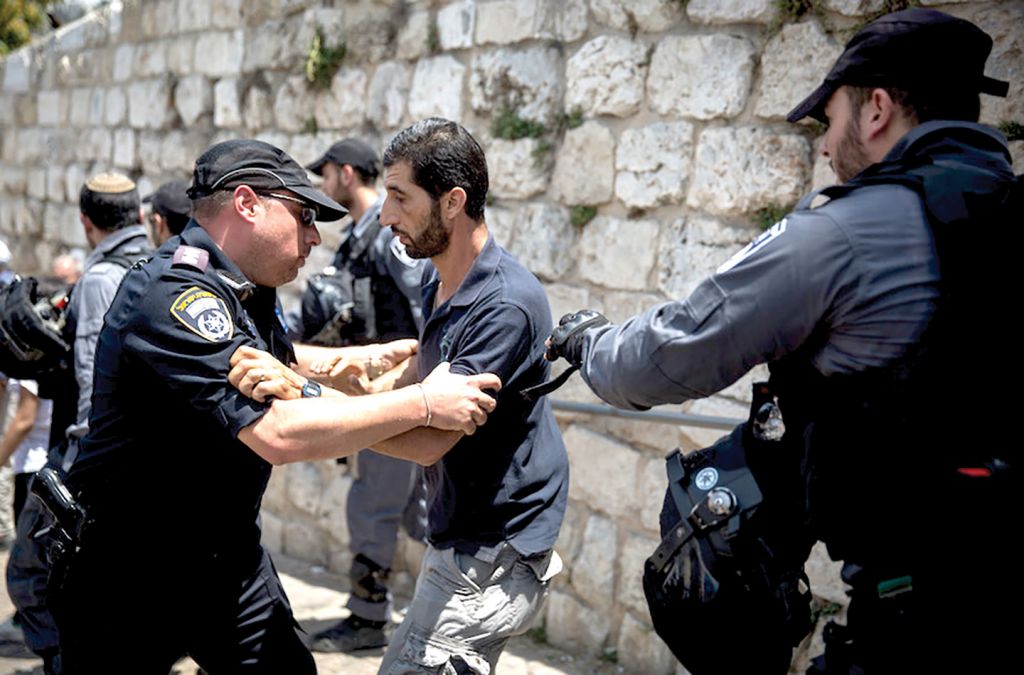 Israeli police trying to clear Muslim worshippers from the area of the Lions’ Gate this week after they performed their noon prayers outside the Temple Mount. JTA

The deaths, the two-day closure of the Temple Mount and the metal detectors have left Jerusalem seemingly on the brink of an explosion. Clashes on the Temple Mount were the spark that unleashed the second Palestinian intifada in 2000 and weeks of stabbing and car-ramming attacks in 2014.

Mustafa Barghouti, a leading member of the PLO and a politician with a secular political party, came to afternoon prayers at the Lions’ Gate this week to express solidarity.

“They are adding more restrictions. … We feel this isn’t the end of the story. This measure is not for security reasons; it’s a clear effort to change the reality in the mosque,” he said.

“The issue is not just the metal detectors. The whole regime [of management and control around the mosques] is being changed. It’s about the arrests of the guards of the Waqf. The whole system is being violated.”

Complaining about a draft bill approved by Israeli ministers on Sunday to require a special majority to divide Jerusalem in a future peace deal, Barghouti said Israel’s government wants to take Jerusalem off the table for future peace negotiations.

On the Israeli side, the shootout and the uproar over the closing of the Temple Mount has energized activists and politicians on the far right who want Israel to assert more sovereignty and allow Jewish prayer.

Jewish activists who visited the plaza when it was reopened to non-Muslims on Monday exulted in the absence of the guards of the Waqf that pair with Israeli police and monitor non-Muslim visitors to the site. On Tuesday, Israeli police said it had detained a Jewish visitor who violated the rules. 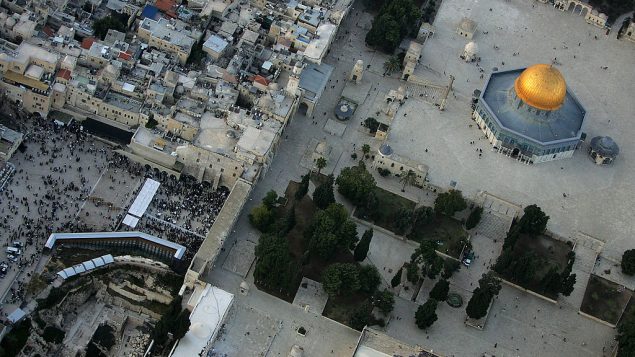 An aerial view of the Dome of the Rock on the Temple Mount and the Western Wall Plaza. The Temple Mount was closed to visitors following an attack last week that killed two Israeli policeman. It has now been reopened. Getty Images

A major showdown is looming on Friday when hundreds of thousands of worshippers are expected to converge on the Old City for afternoon prayers on the Muslim Sabbath.

Though Israeli Prime Minister Benjamin Netanyahu said that the so-called “status quo” regarding control, worship and access to the site would not be changed, Muslims see the security measures — which also include surveillance cameras — as a violation of the status quo.

Daniel Seidemann, a Jerusalem expert and peace activist, said Palestinians are suspicious that Israel’s government will ultimately agree to calls by Temple Mount activists to assert sovereignty. After years of unease between Israelis and Palestinians in the city, a “zero-sum” situation has been created around the holy site.

“This has a history. The history is that Palestinians of east Jerusalem are treated as a hostile population,” he said. “There is absolutely no good will to build on. There is a perception of collective punishment.”

The attack last Friday has also roiled tensions inside the Israeli Arab community. It was a rare instance in which Arabs citizens of Israel —who account for one fifth of the country’s population — staged an armed terrorist attack.

Umm el Fahm has an infamous reputation in Israel as the headquarters of the northern branch of the Islamic Movement, a group linked to the Muslim Brotherhood which was outlawed in 2015. 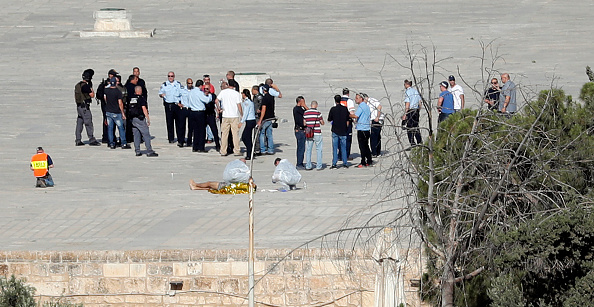 Israeli Arabs by and large did not join the recent wave of stabbings and lone-wolf attacks. But the Temple attack on Friday caught Arab politicians slightly tongue-tied. While Palestinian President Mahmoud Abbas condemned the attack on the policemen, parliament members representing Israeli Arabs demurred when asked to use the word “condemn.”

Though many politicians said that they oppose and reject the use of violence, they backed away from condemning the attack when pressed by interviewers. “This is not our struggle. Our struggle is political. We need to oppose the use of weapons,” Ayman Odeh, the leader of the Arab “Joint List” Party, told Channel 2.

Experts said Odeh’s reluctance to condemn is probably influenced by ideological tensions within his party and its dropping poll numbers. The reticence of Arab politicians is reflected by the fact that the pressure to condemn the attack is coming from mainstream Israeli media, said Eran Zinger, an Arab affairs reporter for Israel’s public broadcasting corporation.

The attack has also laid bare the tensions between the Israeli Muslim and the Israeli Druze, who serve in the Israeli army and border police. The Druze, who number about 100,000, are fiercely loyal to Israel, and enlist in large numbers in the Israeli military and security forces. In the wider Arab community, however, service in the Israeli army is highly controversial. In the days following the attack, some Druze leaders suggested that the attackers deliberately targeted Druze police officers — many of whom are posted at the sensitive spots in the Old City, Zinger said.

The mutual recriminations between Muslims and Druze on Arab-language social media in Israel recalled the interdenominational tensions across the Arab world stoked by the rise of the Islamic State in recent years, said Zinger.

That tension became violent earlier this week, when several people in the Druze-majority village of Maghar attacked a mosque in the village. Druze leader Muafat Tarif condemned religious-inspired violence, but pointed a finger at Muslim religious leaders.

“They are using religion,” Tarif said in an interview to Israel’s Channel 20 news. “They are exploiting the most important place for Muslims to carry out an attack against policemen who have come to protect worshippers.”