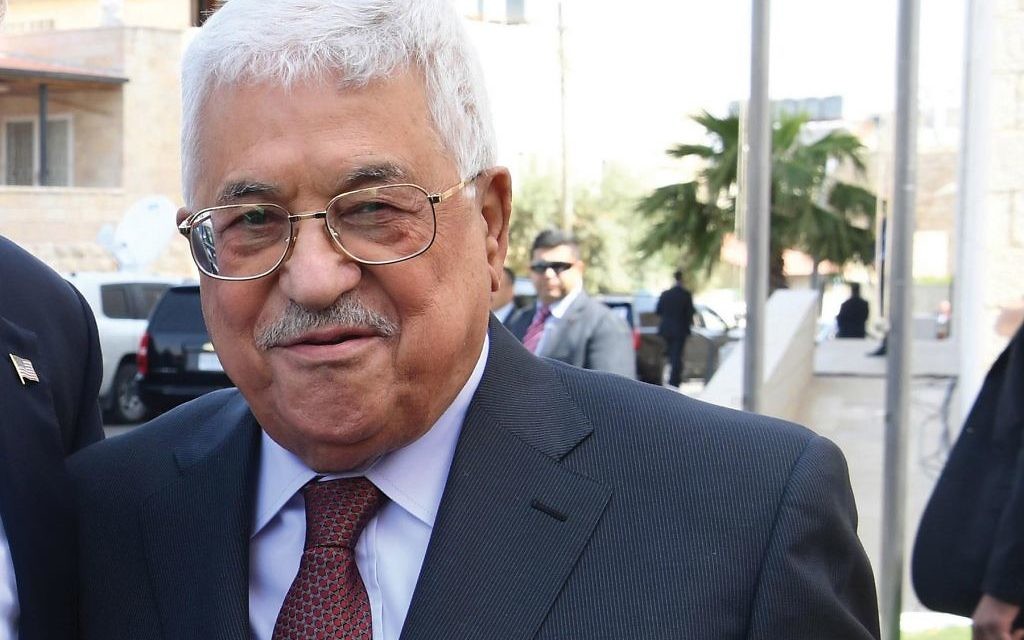 For years, the Palestinian Authority has been using U.S. aid dollars to pay Palestinian terrorists and their families as a reward for their attacks against Israelis. Now, Jewish organizations in the United States, members of Congress and President Donald Trump are calling for the Palestinians to halt the practice.

“We are not going to get anywhere on this new Trump initiative [for Israeli-Palestinian peace] unless some decisions are made by the Palestinian Authority [to end] … the practice of supporting families and prisoners who carry out acts of terror,” said Daniel Mariaschin, executive vice president of B’nai B’rith International. “Brig.-Gen. [Yossi] Kuperwasser has now brought this out into the open for all to see.”

He was referring to Kuperwasser’s appearance Monday before the Knesset’s Foreign Affairs and Defense Committee in which he said the P.A. has paid some $1.2 billion over the past four years to Palestinian terrorists and their families. He said the longer a Palestinian security prisoner is imprisoned, “the higher the salary.” And he said that once they are released, “they get a military rank that’s determined according to the number of years they’ve served in jail.”

He also refuted claims that the payments are nothing more than social welfare benefits, saying the Palestinians’ own documents “clearly state that these are salaries.”

Sarah Stern, founder and president of the Endowment for Middle East Truth, said a bill introduced in late February, the Taylor Force Act, has the support of 24 Republicans in the House and 13 senators, one of whom is a Democrat.

“For many years the P.A. has been playing a dubious game in terms of rewarding terrorists and honoring them by naming town squares, soccer pageants and schools after them,” she said, adding that the practice simply encourages Palestinian youth to “aspire to be a suicide bomber or terrorist.”

“It’s almost impossible when you are raised in such an environment not to aspire to that,” Stern said. “They use every means possible — including textbooks and summer camps — to inspire young children to become terrorists.”

Asked why the proposed legislation has received such little Democratic support, Isaacson said there is concern that the language of the bill “could undermine the Palestinian Authority’s operations in a way that would impinge on their cooperation with Israelis. … We want to find a way to end this atrocious practice without offending Israeli security, and we are in conversations with members of Congress on both sides of the aisle so that this can be addressed.”

Although he has not signed onto the proposed legislation, a spokeswoman for Senate Minority Leader Charles Schumer (D-N.Y.) said that he believes it is “abhorrent that the Palestinian Authority provides support to terrorists and their families, which undercuts the drive to peace, and thinks the United States policy should be to seek a way to end this disturbing practice. The senator is exploring a variety of ways to push forward this agenda.”

Before Trump met with Abbas at the White House on May 3, Schumer had called on him to “hold President Abbas accountable for the Palestinian Authority’s record of incitement and support for those who carry out terror attacks. … President Trump should ask President Abbas to stop making payments to terrorists or their families. He should publicly call out those — like President Abbas — who subsidize terror.

“It is perfectly fine for textbooks to celebrate one’s own cultural heritage and accomplishments,” Schumer added, “but it is simply unacceptable for those same textbooks to teach false narratives, promote anti-Semitism, and deny Israel’s right to exist.”

Malcolm Hoenlein, executive vice chair of the Conference of Presidents of Major American Jewish Organizations, said Palestinian payments to terrorists and their families has long been an issue his organization has deplored and that he was glad “we’re seeing real attention being paid to it now. … We’ve tried for some time to get members of Congress to act on it.

Hoenlein welcomed Schumer’s “strong statement” and said he hopes other Democrats “will line up and together create legislation that is meaningful” to end this practice.

“Until now, Abbas has mocked the U.S. and Europe,” he said.

Asked about concern that the proposed legislation might impede that P.A. security forces in their work with Israeli security forces, Hoenlein stressed that such cooperation is not simply for the benefit of Israel but is just as “important for the survival of the P.A. … They shouldn’t be so quick to threaten to cut off cooperation.”

The P.A. has a budget of $4.2 billion and that $2 billion is from foreign aid. The U.S. is contributing about $500 million this year, of which between $300 million and $350 million is being paid to terrorists and their families. One Congressional proposal now under consideration would be to deduct the amount being paid to the terrorists and their families rather than severing all American aid as the Taylor Force Act calls for, according to Hoenlein.

Trump reportedly brought up the issue of the P.A. funding of terrorists during his meeting with Abbas May 3 in Washington and again later that month when the two held a joint news conference in Bethlehem.

“Peace can never take root in an environment where violence is tolerated, funded or rewarded,” Trump said.