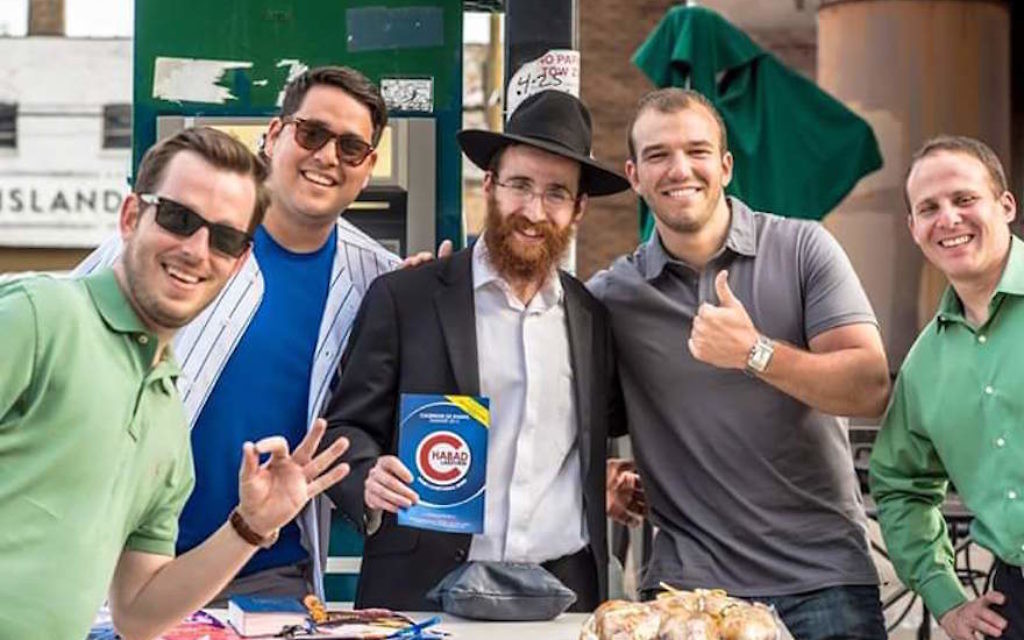 Is God a Cubs fan?

For long-suffering mortal supporters of the Chicago franchise, which has not won a World Series since 1908 (and has not even played in one since 1945), the answer may appear to be no.

But Chabad Rabbi David Kotlarsky has faith. He’s been wrapping Cubs fans in tefillin in a booth outside Wrigley Field all season — and the club is now just four wins away from a World Series berth.

Asked the God question by a local journalist, Kotlarsky said: “God is a fan of doing things that will make more people happy,” according toChabad.org. “I think there’s a lot of good people in Chicago who should be happy; that’s what we’re thinking about right now.”

Kotlarsky, co-director of Chabad of East Lakeview on Chicago’s North Side, has been offering fans spiritual support and help wrapping teffilin ever since the Cubs’ first home game in April. His local status has grown of late, helped by a tweet sent last week by Yahoo sports writer Jeff Passan to his 131,000 followers.

More importantly, the Cubs are in the MLB National League Championship Series, one step away from the World Series, for the first time since 2003. On Tuesday night, they will return home to Wrigley after losing the first two games of the best-of-seven series to the New York Mets.

“We’re seeing a lot more people coming by now during the playoffs,” Kotlarsky told Chabad.org. “People are telling us we’re part of their pre-game ritual.”

After decades of disappointment, the Cubs fanbase is famously superstitious. The legendary “Curse of the Billy Goat” dates back to 1945. After Billy Sianis, owner of Chicago’s Billy Goat Tavern, was kicked out of a Cubs World Series game against the Detroit Tigers because his pet goat was annoying fans in the stadium, he allegedly cursed the team by saying, “Them Cubs, they ain’t gonna win no more.”

The team has not made it back to the World Series since.

Thanks to an influx of young talent assembled by their new Jewish general manager, Theo Epstein, who helped the Boston Red Sox end a similarly long championship drought in 2004, many Cubs fans think this season might finally break the curse.

“Thousands of fans go by, and there’s a feeling of excitement about it,” Cubs fan Jay Sandler told Chabad.org about the tefillin booth. “Since Cubs fans are so ritualistic, I think if they [wrapped tefillin] before and the Cubs won, they’ll certainly do it again.”