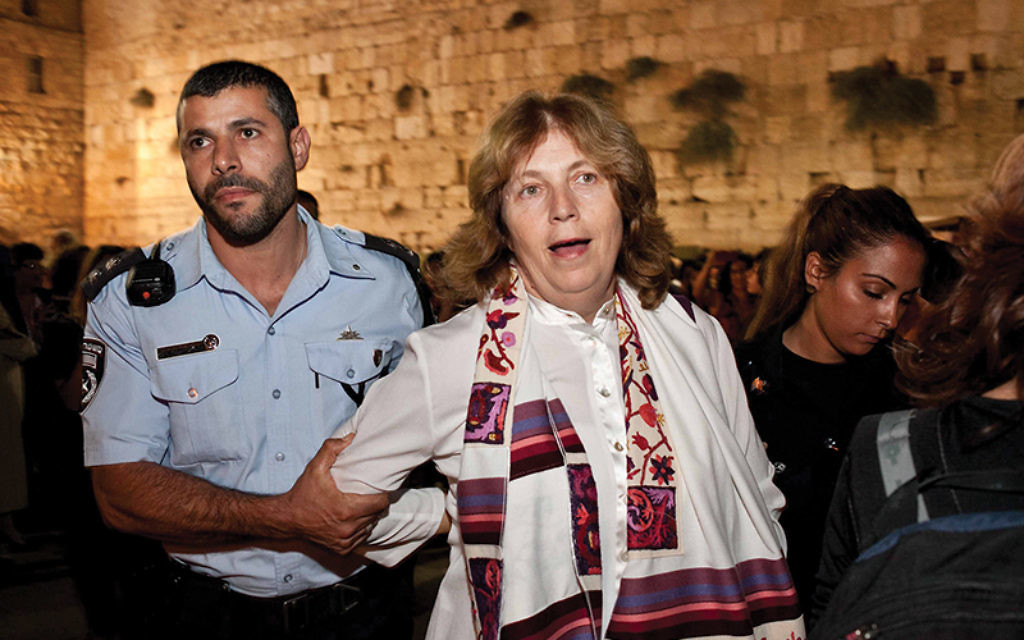 Jerusalem — The Israeli government’s decision Sunday to create an official, government-funded Western Wall prayer section for mixed-gender prayer and women who want to read from the Torah has gratified non-Orthodox Jews seeking government recognition. But the move has left some supporters of Women of the Wall feeling disappointed, even betrayed.

The government’s announcement capped more than two years of negotiations between the Israeli government, representatives of the Jewish Federations of North America, the Reform and Conservative movements in the U.S. and Israel and Women of the Wall (WOW), the pluralistic group that has been at the center of the effort to gain prayer equality at the holy site for more than two decades. During that time, WOW members faced harassment from charedi protesters, police detention and even arrests at monthly Rosh Chodesh services. According to Women of the Wall’s board, the group will move to Robinson’s Arch, an existing egalitarian section of the southern Western Wall that is key to the newly approved plan. It calls for the size of the area to be doubled, to 10,000 square feet, and for raising the status of the egalitarian prayer space by creating a joint entry point that will allow visitors to access either prayer space.

But some longtime members object to moving their prayer services back to Robinson's Arch. To such critics, the WOW board decision makes a mockery of the group’s mission statement, which reads in part: “to achieve social and legal recognition of the right, as women, to wear prayer shawls, pray out loud and read from the Torah collectively at the women’s section of the Western Wall.”

Critics accuse the board, led by Anat Hoffman, of selling out the women who wish to continue to pray in the women’s section of the Kotel either because they feel it is a religious and ideological imperative, or because, as Modern Orthodox women, they believe it goes against Jewish law to pray alongside men without a mechitza.

“We have no objection, of course, to prayer at Robinson’s Arch for those who wish it,” former WOW board member Shulamit Magnus wrote in a scathing op-ed in the Jerusalem Post. “We reject any deal that would infringe upon, let alone deny, the hard-earned and historic rights of Jewish women at the Kotel.

“No can concede someone else’s rights. Anyone who says she speaks for us in doing so, does not. We say clearly: any deal that delegitimizes, let alone bars, tefillah in our minhag [custom] at the Kotel has no bearing on us. We stay at the Kotel,” continued Magnus, one of the leaders of the Original Women of the Wall (OWOW), a group that vehemently opposes WOW’s decision. She is one of four Israeli women petitioning the High Court to permit women to read from the Kotel’s government-funded Torah scrolls.

In a Jewish Week interview, Magnus insisted that those who oppose the agreement “are the [real] Women of the Wall.”

“We have hundreds of supporters,” she added, referring to the supporters of the deal as “the Women of Robinson’s Arch.”

While not singling out WOW, Karen Miller Jackson, a Modern Orthodox board member of Kolech, the Religious Women’s Forum in Israel, said the agreement is “a big win for non-Orthodox Jews" but “does not improve the situation for the modern religious Zionist/Orthodox population” and for Orthodox feminists in particular.

“We still want to daven with a mechitza [divider] at the traditional Kotel site,” she said.

Cheryl Birkner Mack, a longtime WOW member and one of the four court petitioners, agrees.

Even if the committee that will oversee the new prayer space ultimately allocates a section of it for women’s-only prayer, Mack said, praying at Robinson’s Arch lacks the religious and historical significance of praying at the Kotel.

“It’s the same stone but when the Pope or the President of the United States comes to Israel they don’t go to Robinson’s Arch. They go to the Kotel.” She said the Robinson’s Arch area doesn’t have the same feeling of holiness: “It’s what Anat used to call the back of the bus.”

While taking pains not to take sides in the WOW debate, Elana Sztokman, author of the book “The War on Women in Israel,” noted that any agreement that allows women’s prayer groups in the egalitarian section and not at the Kotel further empowers the already powerful rabbi of the Western Wall, Rabbi Shmuel Rabinovitch.

“He is turning the Kotel, a national landmark, into his version of an ultra-Orthodox synagogue — which is just wrong. The Kotel should still belong to the entire nation. And it doesn’t,” Sztokman said.

Like many of WOW’s supporters, Pam Greenwood, who serves on the board of the U.S.-based Jewish Orthodox Feminist Alliance, said she feels “conflicted” by the “compromise.”

“The Orthodox feminist in me is not satisfied, as I feel that women should be allowed to pray within the current bounds of the Kotel with a Torah. The pragmatist in me, however, is thrilled that a solution has been found to a decades-old stalemate — one that will allow women to gather together on a regular basis without obstacle, free from the insults and abuse that they have faced to this point.”

In a frank interview, Anat Hoffman told The Jewish Week she “feels for” those who are disappointed by the agreement, but emphasized that WOW’s decision was based first and foremost on pragmatism.

“I think every group for social change needs die-hard ideologists. But the job of our board is to look at what is achievable within our lifetime. Every group needs to have someone hitting the brakes and understand at what speed society can actually tolerate change. There must be someone at the driver’s seat showing the way.”

Hoffman said she and WOW’s leaders spent countless hours deliberating the issue and ultimately agreed that, given the country’s right-wing leadership and the power charedi parties wield in the Knesset, “This is the best result we can give our group, Jewish women and the Jewish world at this time.”

Hoffman said the board was also motivated by the desire to have some control over the place where they pray. Under the agreement, the egalitarian prayer space will be jointly governed by a new body that will include representatives from Women of the Wall and the Conservative and Reform movements, and will be led by Jewish Agency for Israel Chairman Natan Sharansky.

Asked why she considers Robinson’s Arch an acceptable place to pray now, after she rejected it before, Hoffman said the promised renovations, coupled with the government’s recognition of it as a Western Wall prayer section, will put it on equal footing with the Kotel.

“Then, that was the back of the bus. This is a whole new bus and the tank is filled with gasoline,” she said.

As much as she and other Jewish feminists want “complete and full rights” at the Kotel, Hoffman said, the State of Israel isn’t willing, at this time, to give it.

“But it is willing to give us something else that is respectable and dignified and opens great opportunities for Jewish people and Israelis. We took the opportunity.”

Until the egalitarian space is completed, Hoffman said, the group will continue to pray in the women’s section of the main plaza of the Kotel, where they have been meeting each month.