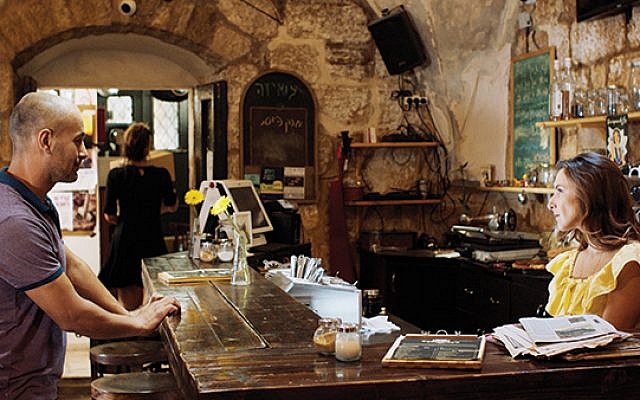 Adeeb Safadi and Sivane Kretchner in “The Reports on Sarah and Saleem.” Of the “moral dilemma” in the film, director Muyad Alayan says, “Are we able to risk our privileges for someone else, or do we instinctually always put ourselves first.?” Courtesy of Dada Films

There are human needs that cross borders, leap barriers and transcend boundaries both spatial and social. As Toni Morrison wrote, “Flesh needs to be loved.”

Working on his first job, Muayad Alayan saw this as a teenager in east Jerusalem. Today he is a 34-year-old Palestinian filmmaker whose second feature, “The Reports on Sarah and Saleem,” opens June 12, but the seeds of his latest film were planted back then.

“The first job I got was in the western part of the city,” he recalled in an e-mail interview last week. “Like the majority of young Palestinians from east Jerusalem, this was my first encounter with the Israeli society beyond the soldiers and police that we are used to encountering in the east side of the city. It was there that I witnessed these relationships between Palestinian and Israeli colleagues of mine that were happening in the dark and away from the eyes of the people of the community on both sides of the city.”

The lesson he absorbed was one that reveals how much the conflict permeates every aspect of supposedly ordinary life in Jerusalem.

“We all knew that the stakes for Palestinians were much higher in these relationships because in view of the segregation in the city and the security-paranoid police, it’s never just about sex or affairs,” Alayan explained. “I can share that at least three of my friends from that era who dated Israeli women ended up having to explain themselves to the police.”

The police weren’t as well-informed as one might hope, often relying on evidence collected by the IDF in raids on Palestinian offices. As Alayan noted, the reports they were reading were often raw, uncorroborated data. The result was a level of peril far beyond the anger of your garden-variety jealous spouse.

So when “Sarah and Saleem” opens with the latter character being brutally arrested by PA officers and asked in the subsequent interrogation, “Tell us about the woman you recruited,” the wheels set in motion are bigger and a lot more dangerous than viewers can imagine.

Therein lies much of the fascination of Alayan’s film. Working from a script by his brother Rami Alayan, the director has crafted an elegantly structured and intellectually rewarding piece that veers from family melodrama into political thriller and back again while shifting between the points of view of four main characters. 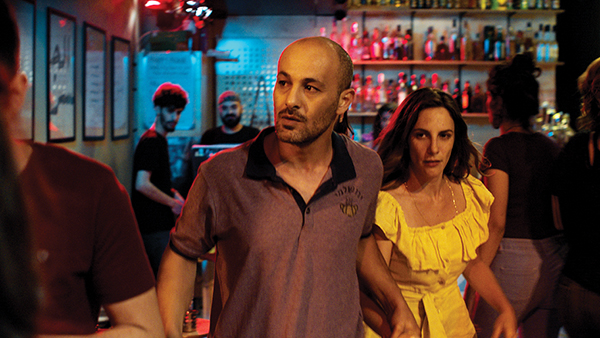 Sarah (Sivane Kretchner), an Israeli woman, owns a successful café in Jerusalem where she met and became involved with Saleem (Adeem Safadi), who delivers for a local bakery. His wife, Bidan (Mais Abd Elhadi), heavily pregnant, is on leave from her university studies. Sarah’s husband David (Ishai Golan) is a rising star in the IDF, a specialist in counter-terrorism with a bright future. Although Saleem is utterly apolitical, his in-laws are connected to Palestinian underground groups in Bethlehem, and he reluctantly agrees to deliver consumer goods to their supporters for money.

It’s not hard to see how these interlocking concerns will mesh into a nightmarish network of personal and political debts, obligations and affiliations, and it is one of the strengths that both Alayan brothers bring to the film that the intricate web of these connections is both clear and compelling. “Sarah and Saleem” works like an Otto Preminger film, using long takes that balance oppositions within a single frame, offering few judgments but much compassion.

In short, the film’s universe is one in which all are compromised, motivated and dominated by shadowy forces beyond their control. Is this cynicism? Muayad Alayan doesn’t think so.

“It is a reflection of my own experience,” he replied bluntly. “To me the political, military and social authorities form the first opposition against the people in my world and in the story worlds of my films. I’m interested in reflecting on the repressive conditions imposed on people and the choices that people make when confronted with pressure from all systems of authority. This is how life is around here. One’s life can turn upside down in a split second.”

And the needs of the flesh pale in comparison to the pressures of daily life.

As Alayan explained, “In ‘The Reports on Sarah and Saleem,’ I am intrigued by the moral dilemma inherent in the human story in the film: are we able to risk our privileges for someone else, or do we instinctually always put ourselves first? The film at its core is about power and privilege and how the crushing socio-political systems push people to act selfishly and hurtfully towards one another in order to survive and keep the privileges they are afforded, be they political, social, legal or economic.”

“The Reports on Sarah and Saleem,” directed by Muayad Alayan, opens on Wednesday, June 12 for a two-week run at Film Forum (209 W. Houston St.). For information go to www.filmforum.org.