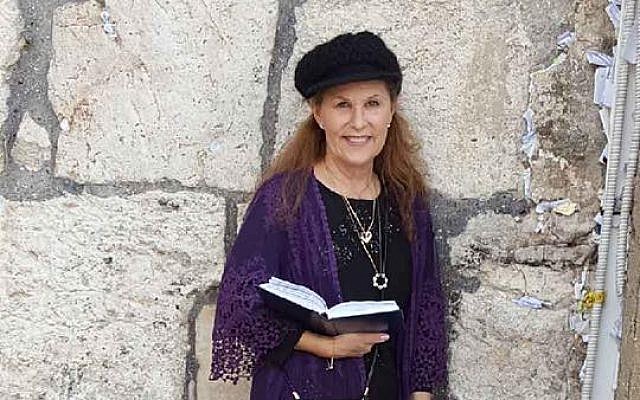 POWAY, California — Jonathan Morales, an armed off-duty US Customs and Border Patrol agent who recently discovered his Jewish roots, was among the worshipers at Chabad of Poway on Saturday when John Earnest entered the synagogue near San Diego during Passover services and began shooting.

“Morales recently discovered his Jewish roots. He would travel three and a half hours from [the California town of] El Centro to pray with us at our shul,” Goldstein told media at a Sunday press conference outside the synagogue. “He felt this was his house of worship. And many times I said, ‘Jonathan, you work for the border patrol. Please arm yourself when you are here; we never know when we will need it.’”

US President Donald Trump spoke with Goldstein on Sunday and took to Twitter to praise the rabbi and Morales, writing: “He may have been off duty but his talents for Law Enforcement weren’t!”

Sincerest THANK YOU to our great Border Patrol Agent who stopped the shooter at the Synagogue in Poway, California. He may have been off duty but his talents for Law Enforcement weren’t!

As for why there weren’t any active duty guards at the synagogue, in an earlier interview with CNN Goldstein said, “Unfortunately, we couldn’t afford to have an armed security officer at every service, so whenever we had extra help, we were grateful for it.”

In a moment that Goldstein referred to as “miraculous,” Earnest’s gun jammed, and congregant Oscar Stewart, a 51-year-old Army veteran, and Morales attempted to subdue the gunman. Morales was also able to open fire and give pursuit. 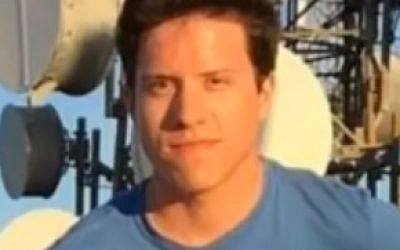 After Earnest fled the building, Morales followed in his own vehicle and shot and hit Earnest’s car. Earnest soon turned himself in to law enforcement.

“I was preparing for my sermon, I walked out of the sanctuary and into the lobby and I saw my dear friend Lori Kaye,” said Goldstein. “I walked into the banquet hall to wash my hands, walked two or three footsteps and I heard a loud bang.”

That bang was the sound of the first shots fired by Earnest, a college student who entered the Chabad House undetected amid a flow of mourners who were gathering for Yizkor, the traditional memorial service held on the final day of Passover.

The rabbi said that when he saw the shooter he initially froze, then raised his hands to cover his face. Two of his fingers were blown off; one was reattached by surgeons at Palomar Medical Center in San Diego late Saturday.

Gilbert-Kaye, whom relatives and friends on Saturday described as a woman of unconditional love and unbounded generosity, was the only fatality of Earnest’s mass shooting.

Goldstein took several minutes to thank San Diego County law enforcement and to praise the wellspring of warmth and support that the local community has offered in light of the tragedy.

A chain of miracles

In a remarkable series of events, the rabbi and a handful of congregants were able to save a group of children playing in the adjacent banquet hall, preventing a full-fledged massacre.

“I ran [to gather the children],” Goldstein says. “My granddaughter, who is four and a half years old, saw her grandpa with a bleeding hand. She saw me shouting, ‘Get out! Get out!’ She didn’t deserve to see her grandfather like that.”

Aided by Peretz, an Israeli war veteran who was also at Chabad of Poway with his family Sunday, Goldstein was able to usher the children out of the banquet hall with the shooter in pursuit.

But in what Goldstein referred to as a “miracle,” Earnest’s gun jammed. Even while Morales was still on Earnest’s trail, congregants — who had been gathered in the sanctuary and would have made easy targets for Earnest had his gun not jammed — fled to Chabad’s front entrance.

Goldstein’s hand was bleeding badly and his two fingers were dangling by cartilage. “I grabbed a prayer shawl,” he said, wrapped his wounds, and stood on a chair to address his congregation.

“I said, ‘I gotta do something,’” he said. “I said to our congregation: ‘Am Yisrael chai [The People of Israel live]. We are a Jewish nation that will stand tall and we will not let anyone or anything take us down.’”

Farewell to an ‘angel’

Gilbert-Kaye was one of the congregation’s oldest and most devoted members, the rabbi told media. A former employee of Wells Fargo, she was instrumental in helping Chabad secure the loan for the building in the early 1990s. She and her husband Howard were so close with the rabbi and his wife that two weeks ago they flew to New York City for Goldstein’s youngest daughter’s wedding, and danced together with the bride. 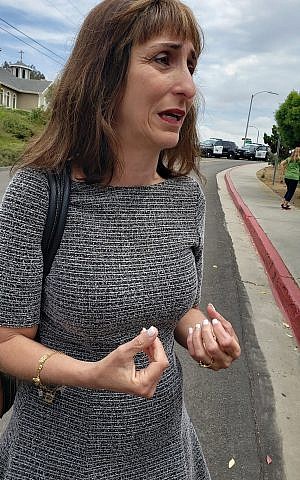 Her generosity and kindness was lauded on Sunday by Roneet Lev, who was at the Chabad of Poway to mourn. Lev described herself as Kaye’s best friend.

“Lori Kaye is an angel on this planet,” Lev said. “She’s touched many lives in her own life. Not just in this community but throughout the entire world.”

Describing a woman who always carried gifts cards and greeting cards to offer as presents and who would regularly purchase extra coffees and donuts for homeless people on the street, Lev explained that Kaye was at Chabad of Poway to say the first Kaddish mourner’s prayer for her mother, who had recently died.

Kaye’s daughter Hannah lives in Los Angeles and had driven down to be with her mother for the service.

Lev offered hope and optimism as she spoke of her friend.

“Even in this horrible, painful event, we know good will come out of it,” Lev said. “Lori is known for bringing out the good in people. And look at these flowers. Look at this law enforcement. Look at the good people of San Diego. Lori is now bringing them together.”