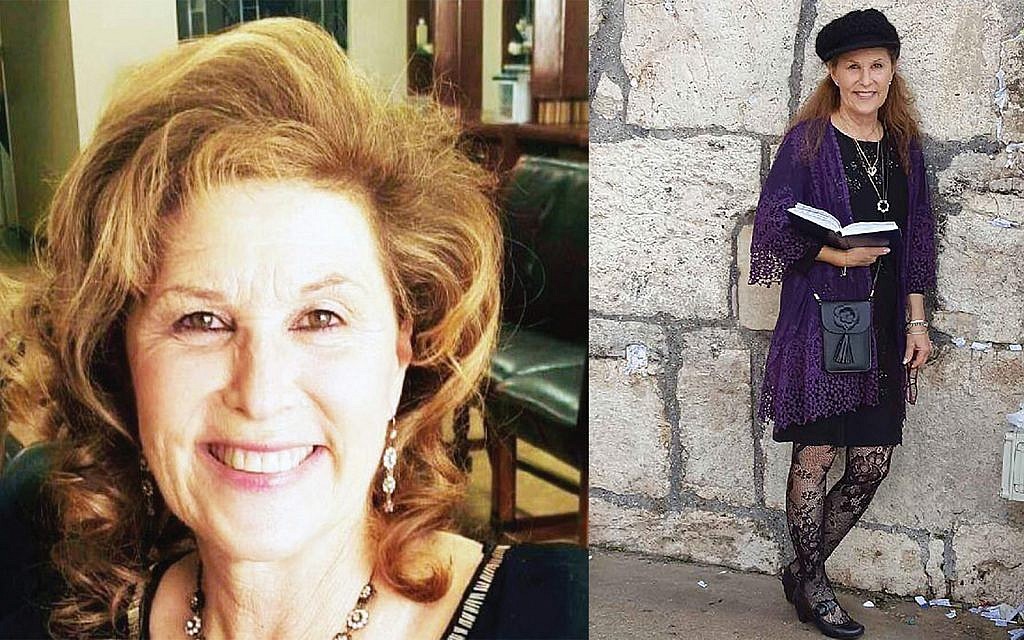 Lori Gilbert-Kaye was murdered at the Chabad of Poway shooting that occurred last Saturday on the final day of Passover. Facebook

Poway, Calif. (JTA) — With hundreds gathered to show support for the victims of a shooting inside his synagogue, Rabbi Yisroel Goldstein recounted the moment when he came face to face with the gunman and what happened next: He described watching a congregant’s husband, a doctor, faint as he attempted to give CPR to his bloodied wife, and hearing their daughter call out in terror.

“This is not supposed to happen,” Goldstein told the crowd, who had gathered for a candlelight vigil at a park Sunday in this community 20 miles north of San Diego. “This is not a pogrom. This is Poway.”

Poway’s landscape is textbook Southern California with its tract houses, red-tiled roofs, manicured lawns and palm trees off in the distance. This affluent community of about 50,000, it turns out, is not immune to the gun violence that has made schools and cities across the country synonymous with bloodshed. It’s not immune to the recent wave of anti-Semitic hate that has left toppled tombstones, spray-painted swastikas and, back in October, the 11 dead bodies of mostly elderly synagogue-goers in Pittsburgh.

But a day after a gunman entered Chabad of Poway, killing congregant Lori Gilbert-Kaye, 60, and injuring three others, including Goldstein, the Jewish community here teetered between disbelief (“Poway of all places?”) and the conviction that in a post-Pittsburgh world, all Jewish communities are possible targets. (“Yes, even Poway.”) 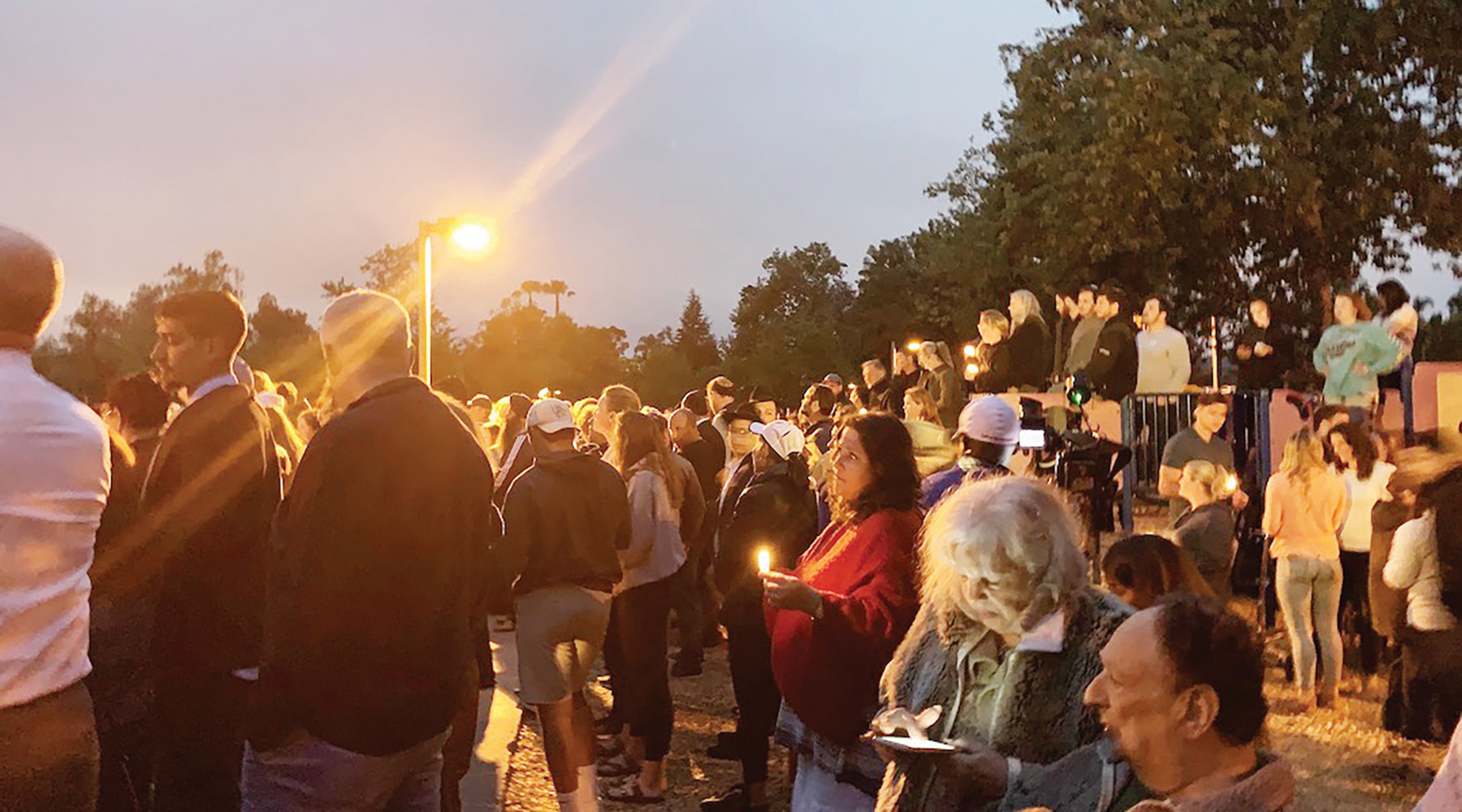 “After 9/11, when they first started with all the [synagogue] security — with the cameras and the locks and the security glass — I always thought, ‘This is overkill for Poway,’” said Janet Pollack, 57, who is a member of the city’s Reform congregation, Temple Adat Shalom. “That it came to this small, very peaceful community is a little overwhelming.”

Rabbi Mendy Rubenfeld, the Hebrew school director at Chabad of Poway, said the city is a warm, welcoming place for religious Jews. In the 16 years that he’s lived here, “I never received an unkind statement. No one has so much as shown me the finger.”

After a gunman motivated by his antipathy for Jewish support for immigrants killed worshippers inside Pittsburgh’s Tree of Life synagogue, Rubenfeld knew such an attack was likely to happen again somewhere. He just never thought it would be here.

But Douglas Stone, 70, a friend of Rabbi Goldstein, said since the Pittsburgh tragedy, he’s been keenly aware that hate-fueled violence could happen in any Jewish community, including his own.

“We always say ‘never again,’ but here we are,” said Stone, a member of Adat Shalom and an active participant in Chabad’s programming for people with disabilities. (Stone’s son has Down syndrome.)

Given the threat, Stone said, “I’ve thought about getting a gun” for protection.

Saturday’s shooting took place on the last day of Passover and six months to the day after the Pittsburgh massacre. It closely followed two other deadly attacks on houses of worship, one targeting Muslims in New Zealand and another targeting Christians in Sri Lanka.

The Poway attack has shaken the local Jewish community. (The city is home to about 700 Jewishly affiliated families, according to Rabbi David Castiglione of Adat Shalom.) But its impact on how Jews live and pray in this quiet hamlet — home to a Reform, Conservative and Orthodox synagogue — remains to be seen. 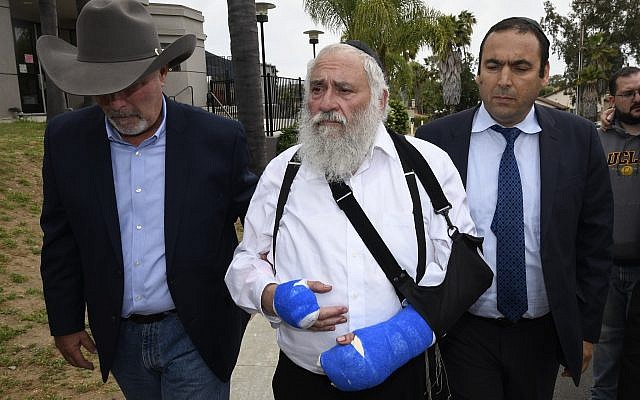 Rabbi Yisroel Goldstein, center, arrives for a news conference at the Chabad of Poway synagogue, Sunday, April 28, 2019, in Poway, Calif. A man opened fire Saturday inside the synagogue near San Diego as worshippers celebrated the last day of a major Jewish holiday. (AP Photo/Denis Poroy)

Rene Carmichael, who works for the city of Poway, said it’s common to see Orthodox Jews walking to services along Rancho Bernardo Road, one of the city’s main thoroughfares, on Saturday mornings and Jewish holidays. She said in the wake of the deadly violence targeting Chabad, she hopes “people will be offering words of kindness to them” as they walk.

But Leah Golembesky, a longtime member of Chabad of Poway, said newfound fear will now accompany the walk to synagogue.

“Now we are too scared to walk with a kippah,” said Golembesky, 37, of San Diego, whose husband was worshipping at another area Chabad on Saturday. “We saw these type of incidents coming.”

Golembesky said her young children have faced anti-Semitic harassment at area public schools and that a Poway house with Chanukah decorations was vandalized with swastikas in the past year.

The incidents inspired her to help organize the March for Light, a December rally in support of the San Diego-area Jewish community. It also compelled her family to sponsor an event last month at Chabad of Poway featuring the stepsister of Anne Frank, Eva Schloss.

Not two months later, the building where Schloss told her story of surviving the Holocaust and stressed the importance of speaking out against injustice “to make it a safer and better place for everyone,” was a scene of violence.

At around 11:30 a.m. Saturday, as more than 60 congregants worshipped inside the sanctuary, a 19-year-old gunman identified as John Earnest entered the building and began firing shots. Goldstein heard a loud noise, went to investigate and found a bloodied Gilbert-Kaye lying on the floor in the lobby. She had come to take part in the memorial Yizkor prayer service for her late mother, who died last year. 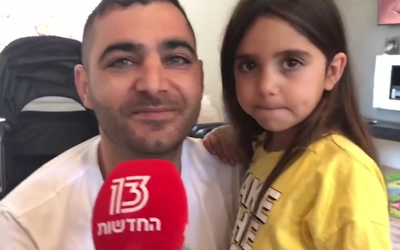 Almog Peretz (L) and niece Lian Dahan, survivors of the April 27 shooting at the Chabad synagogue in Poway, California Channel 13 screenshot via Times Of Israel

Goldstein, who was shot in the hands, lost a finger in the attack. Almong Peretz, who was visiting from Sderot, Israel — a city that is a frequent target of Hamas rockets — was hit in the leg. Peretz’s niece, Noya Dahan, 8, also suffered shrapnel wounds during the shooting.

Gilbert-Kaye, the sole fatality, was remembered as thoughtful and generous. Her friends said she would drop off gifts for no other reason than that she was thinking of them, and would send not one greeting card for a birthday or an anniversary but three or four.

“Literally, it was no less than three cards for every occasion,” said her friend since childhood, Lisa Busalacchi, 61.

Gilbert-Kaye worked for a company that made promotional goods, such as tote bags, for businesses and sporting events — and often donated the extras to Chabad.

Another longtime friend of Gilbert-Kaye, Michelle Silverstein of nearby La Jolla, said they would talk on the phone every day, and sometimes twice a day. They discussed everything from family life to world events to politics, on which “we agreed to disagree — profusely,” according to Silverstein, who said Gilbert-Kaye was a vocal supporter of President Donald Trump.

“If you were sick, she’d be there giving you chicken soup,” Silverstein said, adding that her friend “would give and give and give, and she believed that giving anonymously was the highest degree of tzedakah,” or charity. 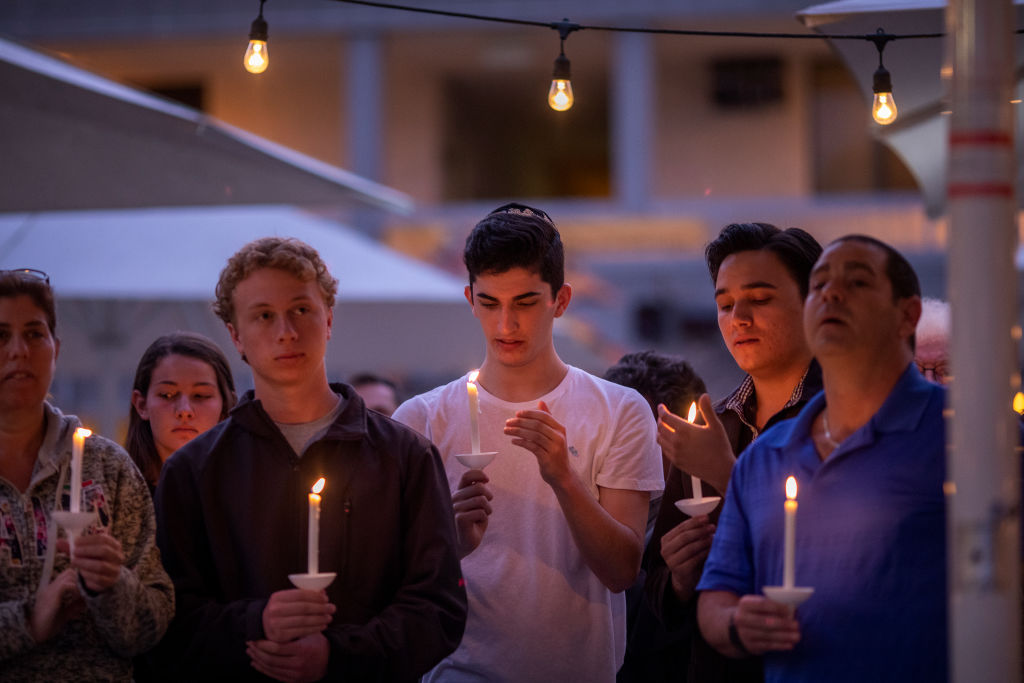 Last year, Gilbert-Kaye and Silverstein celebrated their 60th birthdays together, and they had already begun discussing what they would do when they turned 70.

Gilbert-Kaye was buried Monday afternoon following a memorial service at Chabad of Poway. She is survived by her husband, Howard Kaye, a physician, and their daughter, Hannah Kaye, 22.

The gunman was chased off with the help of two Chabad congregants: Oscar Stewart, a U.S. Army veteran, and Jonathan Morales, an off-duty border patrol agent. Earnest was apprehended and has since been charged with one count of first-degree murder and three counts of attempted murder. Local law enforcement is treating the shooting as a hate crime.

As unlikely a target as many considered Poway to be, the Chabad convened an event about synagogue security last fall in the wake of the Pittsburgh shooting. 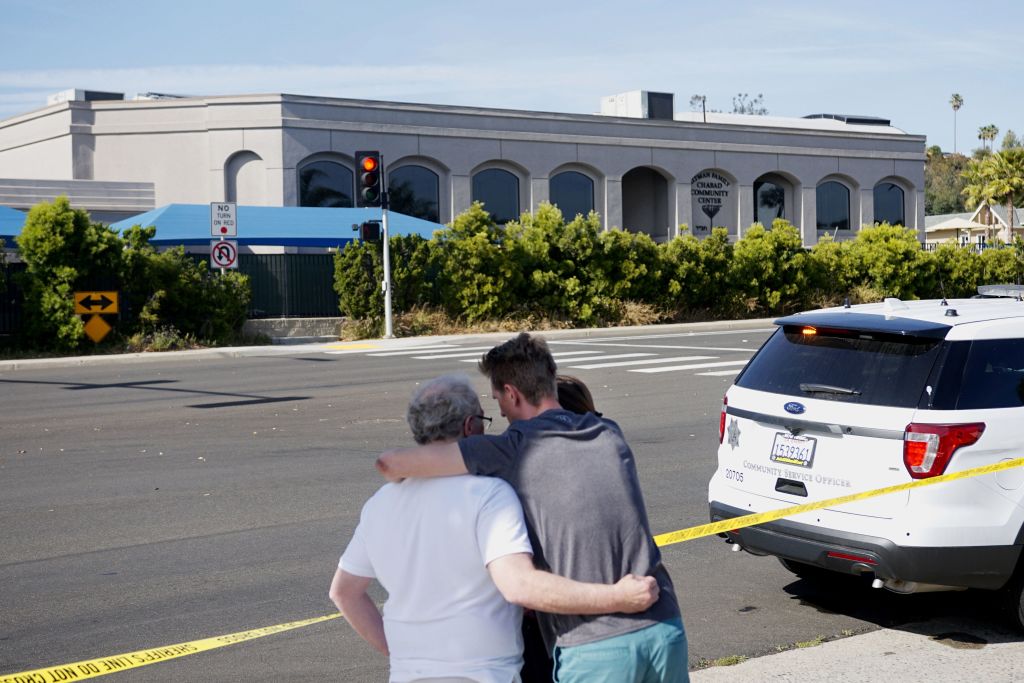 People hug next to police tape across the street from the Chabad of Poway Synagogue after a shooting on April 27, 2019 in Poway, California. – A gunman opened fire at a synagogue in California, killing one person and injuring three others including the rabbi as worshippers marked the final day of Passover, officials said Saturday, April 27, 2019. Getty Images

“We memorialized the victims of the Tree of Life massacre, and then we gave them tips about what to do if hate comes knocking at the door,” said Poway Mayor Steve Vaus, who attended the meeting with representatives of the San Diego County Sheriff’s Department. “Tips like, if you can run away, run away; if you can hide, hide; if you can’t hide, challenge the shooter.’”

During Saturday’s shooting in Poway, “all of that happened,” the mayor told the Jewish Telegraphic Agency, “and I have no doubt that that meeting contributed to saving lives.”

At the vigil Sunday evening, which brought together Jews and non-Jews — the crowd included Muslim women in hijabs and Sikh men in turbans — Goldstein recounted what he said before being transported to the hospital following the shooting.

Looking out at the fearful, despairing congregants, who had made their way out of the synagogue, the rabbi got up on a chair, his hands bleeding badly.