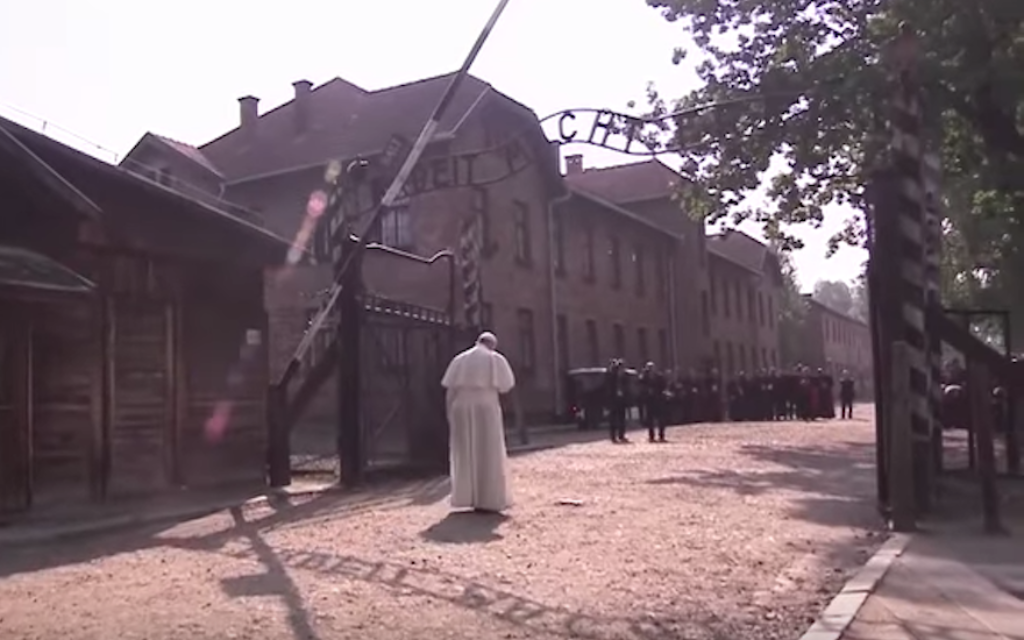 Pope Francis visited the Auschwitz-Birkenau former Nazi death camp in Poland, in what the World Jewish Congress President Ronald Lauder said was an “important signal to the world.”

On Friday, The Associated Press reported, the pope prayed in silent contemplation before meeting Holocaust survivors in front of the death wall where the Nazis summarily shot thousands of people.

Among the survivors he met were Helena Dunicz Niwinska, a 101-year-old woman who played the violin in the Auschwitz orchestra, as well as survivors who worked at the camp hospital or who were there as children.

Francis lit a candle in front of the death wall, bowing his head in prayer before visiting the cell of Polish priest and saint Maximilian Kolbe who died at Auschwitz after taking the place of a condemned man.

The visit falls on the 75th anniversary of the day Kolbe was condemned to death.

Ahead of his visit Francis said that rather than making a speech, he would stand in silence to reflect on the horrors committed and let his tears flow.

After arriving Wednesday in Poland, the pontiff said the world had been plunged into a piecemeal third world war. He has repeatedly denounced those committing crimes in the name of religion, after Europe suffered a string of deadly jihadist attacks.

In a statement Friday, Lauder praised the pontiff, who has forged ever-closer ties between the Catholic Church and Jews since his election in 2013.

“Pope Francis is one of the closest allies Jews have today in the fight against anti-Semitism, bigotry and hatred,” Lauder said. “He is a true friend of the Jewish people, a man who reaches out to others and embraces them. Never over the past 2,000 years have Catholic-Jewish relations been better.”

The pope’s visit “sends an important signal to the world that this dark chapter must never be forgotten and that the truth about what happened seven decades ago must not be obfuscated,” Lauder added.

The late pontiff John Paul II, who was born in Poland, visited Auschwitz in 1979. His successor, Pope Benedict XVI, visited in 2006.

“Pope John Paul II came here as a son of the Polish people,” Benedictus said. “I come here today as a son of the German people. For this very reason, I can and must echo his words: I could not fail to come here.”