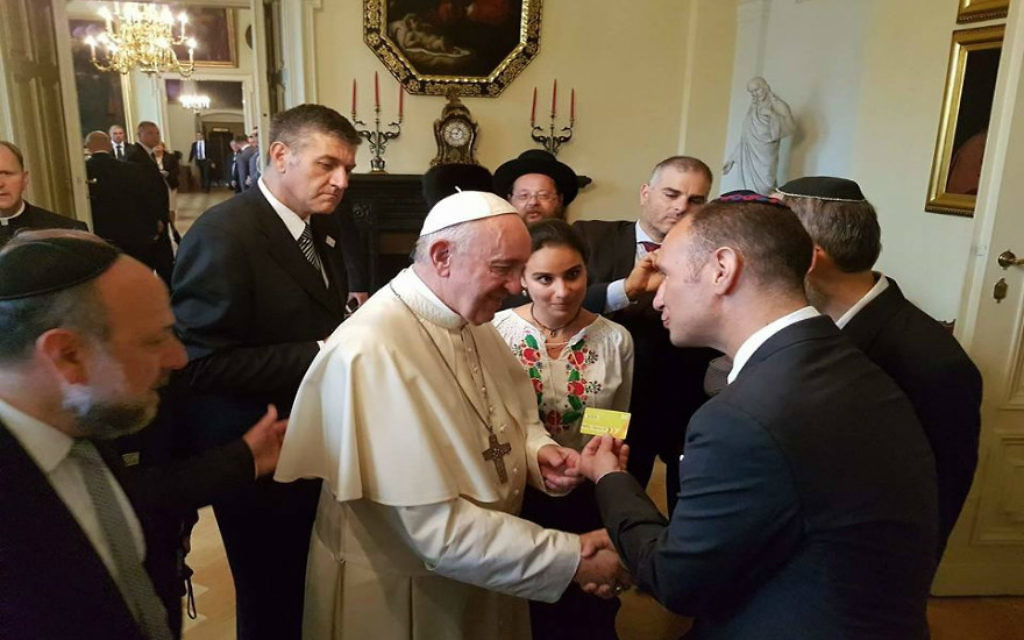 Pope Francis is the newest member of the Krakow Jewish Community Center.

JCC Executive Director Jonathan Ornstein presented the pontiff with a JCC membership card and an acid-green JCC T-shirt during a reception Sunday at the residence of the archbishop in Krakow.

Francis was concluding a four-day visit to Poland to mark the Roman Catholic Church’s World Youth Day. During his trip, the pontiff visited Auschwitz-Birkenau, the former Nazi death camp that is now a museum and memorial, where he prayed silently and met with Holocaust survivors.

Ornstein told JTA the meeting with the pope was an honor.

“I told him about the rebirth of Jewish life in Krakow and how close our relations are with the church. And I thanked him for giving voice to the oppressed,” he said.

Among the guests at the JCC were the chief rabbi of Poland, Michael Schudrich, and prominent Auschwitz survivors Marian Turski and Roman Kent. Also present were Piotr Wislicki, director of the Association of the Jewish Historical Institute of Poland, and the presidents of several Polish Jewish communities.

Francis’ JCC membership card features the number V007 – V for VIP. The number 007, with the 00 meaning “license to kill,” is the ID number of the fictional British secret agent James Bond. Asked on Facebook whom the pontiff had the license to kill, Ornstein replied: “A license to kill intolerance.”

The Krakow JCC was founded in 2008 and numbers up to 600 members. One Facebook commentator quipped that the pope, 79, would be eligible to join the JCC’s seniors club.