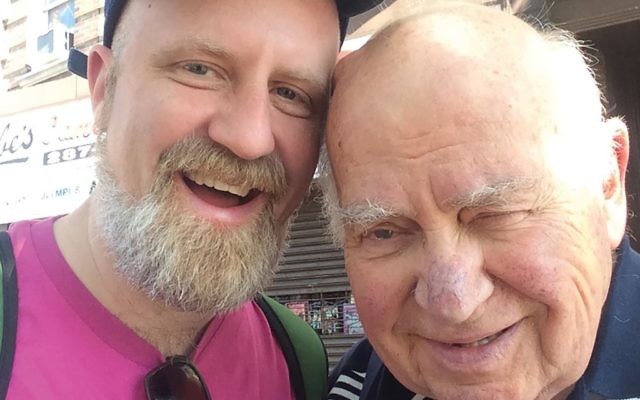 Like many Jews who have suffered the loss of a parent in the last year, Sandi DuBowski says Kaddish daily.

Unlike many traditional Jews, he usually doesn’t do it in a synagogue.

Instead, DuBowski, a Greenpoint, Brooklyn-based director and producer best known for his 2001 documentary about homosexuality in the Orthodox community, “Trembling Before G-d,” has recited the mourner’s prayer “everywhere” — on the street, in parks, in a bar, in a dentist’s office, in friends’ apartments, in a Catskills forest, in a variety of public venues — since his father, Elliot (Hebrew name: Eliyahu), died at 84 in January.

Sometimes it’s just he and another person; other times, he’s surrounded by 20 sympathetic people. Sometimes, he’s with people who are familiar with Kaddish; other times, with those doing it for the first time. Sometimes, he does “virtual Kaddish” by Skype, inviting, via his blog and by email, friends and fellow mourners to “witness” him saying the Hebrew words. “Some people are ‘fresh’ mourners,” having just suffered a loss in their family or in their circle of friends. “It’s a real mix,” he said.

DuBowski, who has been conducting an ambitious self-study of the mourning process since his father died, said his effort is part of what he calls a Mourner’s Corner, his way of honoring his father’s memory by reaching out to men and women — Jewish and not — to join him in the Jewish ritual. (DuBowski can be reached at sandi@filmsthatchangetheworld.com.) This month his mourning initiative reaches the halfway point of the process, which traditionally stops after 11 months.

“I deeply connect with prayer and Jewish ritual — Kaddish is in our DNA.”

DuBowski, who keeps a kipa and a photocopy of the Kaddish prayer with him wherever he goes, calls it “a way to be comforting and be comforted.”

His Kaddish is not necessarily part of a prayer service, but often the conclusion of a creative memorial ceremony that often includes songs, poetry and stories about the people for whom Kaddish is being recited. “At the end we all say Kaddish together,” he said. “It’s a way of making Kaddish meaningful.

“I deeply connect with prayer and Jewish ritual — Kaddish is in our DNA,” said DuBowski, who is also known by his Hebrew name, Simcha. He was raised in a Conservative home in Brooklyn, and now identifies as “post-denominational.”

What would his father say about what his son is doing in his memory? He’d probably be pleased, DuBowski said, adding, “My Dad and I never had a conversation about how I would honor him. Hopefully, he would feel the warmth, wherever he is,”

How would DuBowski answer people who criticize his untraditional way of following Jewish tradition? “If they’re going to sit in judgment of a mourner …” he said, leaving the answer unfinished and his intention clear.  “I feel I’m honoring the spirit of Judaism.”

DuBowski is not sure if his Mourner’s Corner will end when his year of mourning ends. It may continue in some form, he said. “I still want to honor my dad.”