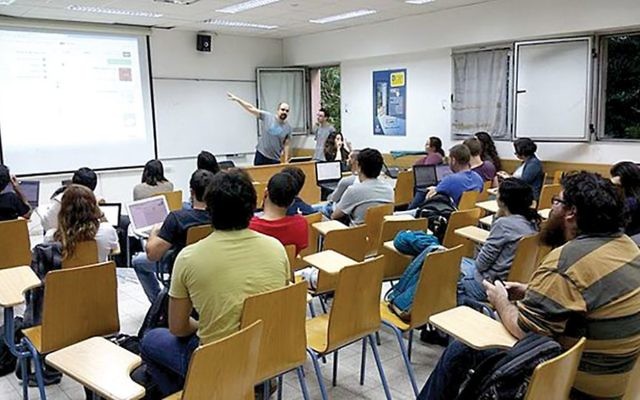 A Tel Aviv University classroom: No politics from the lecturn, please. Wikimedia Commons

I try to choose a quiet news day to have my haircut. Nobody questions the self-assigned mission of hairdressers and taxi drivers to provide political commentary for the duration of their interaction with you. But the right of professors to do so with their students is now being evaluated.

A new ethics code drafted for Education Minister Naftali Bennett proposes banning academics from voicing their political opinions in lecture halls and classrooms. Universities have responded furiously, and the umbrella body for their heads “vehemently” objected, saying that the idea undermines academic freedom.

The Israeli right wing commonly claims that academia is dominated by the left, and that professors force-feed students their ideology. Bennett said that the new ethics code, which will also prevent academics from calling for boycotts against Israeli universities, is much needed and that it will protect the integrity of academia instead of undermining it.

The document probably won’t be implemented in its current form — but it does have significant clout, as it was prepared by the very same esteemed philosopher, Asa Kasher, who prepared the Israeli military’s ethics code. It’s Bennett’s opening proposal in what will be a negotiation with universities — and a highly controversial opening proposal at that.

Not only would the current document bar lecturers from talking about their political views, but there would be bodies on each campus checking implementation and giving disciplinary citations if they break the rules and a student complains.

Israel’s universities are powerhouses of independent and critical thought, as the country’s defenders will often point out when highlighting the absurdity of an academic boycott. Protecting the independence of Israeli academia is, it would seem, an important priority vital to the upholding of liberal values in Israel.

At the same time, Bennett’s belief that there is a problem isn’t right-wing demagoguery. The political assessment that students get in lecture halls may be more informed than the monologue that I get when I go, with trepidation, to get my haircut, but it is often no more open to alternate views and opinions. Just as the hairdresser vilifies and mocks opponents of his views, academics often do the same to roomfuls of students.

To an extent, this is par for the course of a university education that opens the minds of students to new ideas. On the other hand, Israeli society is complicated and academics disproportionately represent a certain sector — left-leaning Ashkenazi secular people who don’t live in settlements — while students are more varied in their backgrounds. It’s common for students who don’t share their professors’ worldview to feel picked on in discussions, feel marginalized and even fear that their grades can suffer because of their outlook.

I heard a few days ago from a psychologist about a relative of his. She was taking an advanced psychology course and felt that as a religious settler among secular residents of central Israel, she was referred to in discussions as an embodiment of the settler movement and what was seen in the classroom as its negative impact on Israel. We were talking about an experienced middle-aged professional, who has much more maturity than younger students, but who was nevertheless deeply troubled.

These complaints are not always simple to assess. On the one hand, students shouldn’t be made to feel picked on, while on the other, the academy is a place for open the discussion of ideas. Politics is relevant to many areas of Israeli academia, from economics to psychology. The psychology professors in the account I talked about were focused on their students’ places of residence because they see Israel’s presence in the West Bank and conflict with the Palestinians as relevant to their discipline — and the existence of settlers and settlements is a key issue in this.

When settlers say that their residence shouldn’t be held up to any more scrutiny than another person’s decision to choose Tel Aviv over Herzliya, that isn’t avoiding politics. Rather, it is insisting on a political narrative that plays down the controversy over West Bank settlement and regards settlements in the same way as areas within sovereign Israel.

Banning academics from talking to students about their political views isn’t only too close for comfort to the idea of gagging intellectuals, it’s also a slippery slope that could end up limiting the national discourse in a way that suits those in political power. The settlement issue could be sidelined, as could other subjects; for example, discussion of human rights issues could be restrained if perceived as attacks on government policy.

Instead of a discussion based on a single controversial proposal commissioned by a controversial education minister, Israel needs to address the boundaries of political discussion in teaching through a national discussion that involves left and right, Jews and Arabs. It needs a truly representative body to come up with guidelines that take account of a whole range of sensitivities and strike a balance between personal respect and frank academic discussion.

The university heads are against any unified code of conduct, saying that each institution should be free to set its own standards. I think they are wrong, because students arrive from outside of this academic clique, and wider society should have some input to the norms with which its children are educated when they get to university.

Let the education minister have a code of conduct, but make it a document that reflects consultation with the widest possible range of views and opinions in Israeli society. And make it clear that this can’t be a code that the right wing can use to gag left-wing academics, by giving everyone a stake in finding a sensible balance on the issue of the place of politics in the academy.

How? By making the code govern the religious academy as well as the university. The code should be formulated to cover study at the yeshivas that are part of the state’s hesder program, in which thousands of youngsters combine army service and religious study. Some of these government-funded institutions teach Torah with a large dose of political pro-settlement fervor — sometimes to the dismay of Israeli liberals.

If Bennett knows that the lines that shouldn’t be crossed in education will apply in the institutions that are the pride and joy of his Jewish Home Party’s support base, national religious Jews, he will oversee the process of formulating codes responsibly.

Assessing where to draw the line about how much educators should espouse politics, and indeed whether it is even possible to disentangle politics and education, is a difficult challenge for yeshivot as well as universities. Perhaps with a national institute that looks at both types of institutions, the right and the left will understand the challenge and focus themselves on the good of education rather than promoting their own agendas. They could even use the opportunity to increase national cohesion instead of division.