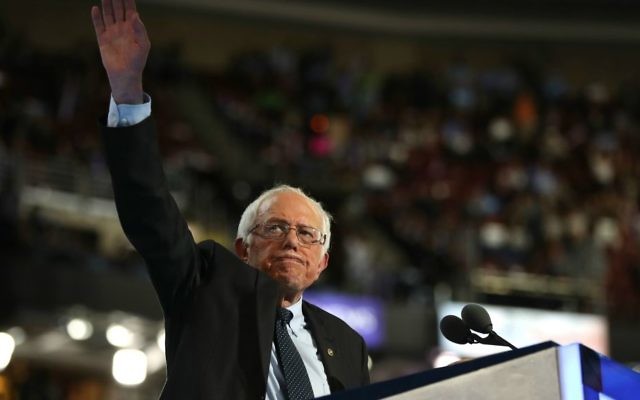 Sen. Bernie Sanders waves to the crowd after delivering remarks on the first day of the DNC in Philadelphia on July 25, 2016. Getty Images

I’ll admit it: At first I didn’t think it was a big deal. Someone alerted me to a tweet from Politico touting their cover story about Bernie Sanders’ wealth. “The Secret of Bernie’s Millions” is illustrated by a montage of the Jewish senator, one of his homes — and a tree sprouting $100 bills. You know: Benjamins.

The text of the original tweet touting the piece, since deleted, read “Bernie Sanders might still be cheap, but he’s sure not poor.”

A Jew, banknotes, that word “cheap” — how is that not anti-Semitic? That’s what critics wanted to know.

At first I wouldn’t take the bait. Frugality and attacking the rich is Bernie’s brand. He’s a Vermont socialist, for goodness sake. The premise of the article, like the illustration and tweet, is that “Sanders has become one of those rich people against whom he has so unrelentingly railed.”

I thought Politico’s takedown was puerile — you don’t have to take a vow of poverty to campaign against America’s obscene wealth gap – but hardly anti-Semitic.

But then I read a tweet that made me think twice: “Can @politico explain to us how photoshopping money trees next to the only Jewish candidate for president and talking about how ‘cheap’ and rich he is *isn’t* antisemitic? Or are they just letting this happen because he’s a progressive politician they don’t like?”

That tweet was from Rep. Alexandria Ocasio-Cortez, and it reminded me that what I think is or isn’t anti-Semitic is less important than how others regard — and weaponize — anti-Semitism. And AOC raises an important point about what we are willing to criticize and forgive when it comes to anti-Semitism.

Her tweet invokes accusations of anti-Semitism that have dogged one of her House freshman colleagues, Ilhan Omar of Minnesota, whose own tweet about Jewish wealth was widely condemned for — I’m being charitable here — “invoking anti-Semitic tropes.” Omar’s ill-conceived comments about Israel supporters led to a House resolution condemning anti-Semitism and other forms of hate speech. (Omar apologized for saying that AIPAC buys politicians’ support of Israel.)

“Notice the people willing to explain this away,” Ocasio-Cortez continues, referencing the Politico tweet. “[Y]et when Ilhan’s words are taken out of context, they are the 1st to jump on her. Look at how these accusations are selectively enforced on the left, esp when it’s the *alt-right* actually committing antisemitic violence in the US.”

There is a lot to unpack there, but AOC is basically alleging that anti-Semitism is, like climate change, a problem that many people are unable to separate from their political biases.

A transactional attitude toward hate speech undermines the credibility of the monitors.

She’s right: A lot of people who are outraged over Omar are eager to downplay anti-Semitism on the right. These people are known as conservatives. Similarly, a lot of people on the left – including AOC – are unwilling to acknowledge how anti-Israel rhetoric often mirrors classic anti-Semitism, context be damned.

The reaction to the Politico tweet may not be the best example of this hypocrisy. I suspect that it didn’t get the same attention as Omar’s notorious “It’s all about the Benjamins, baby” tweet because Politico is a news site, not a high-profile politician. And unlike Breitbart or The Daily Caller, Politico isn’t associated with the right, as far as I can tell.

Plus, Politico deleted and apologized for the tweet, although not the illustration. “For the record: This replaces a deleted tweet that needed more context. Our apologies,” read an updated tweet.

A better example of this eye-of-the-beholder view of anti-Semitism was a tweet from October, when House Minority Leader Kevin McCarthy wrote that “we cannot allow Soros, Steyer, and Bloomberg to BUY this election! Get out and vote Republican November 6th. #MAGA.”

That big resistance funders George Soros, Tom Steyer and Michael Bloomberg are Jewish or have Jewish roots led a lot of people to accuse McCarthy of dog whistling. Jewish control of the anti-MAGA agenda is a staple of white nationalists and anti-Semites on the alt-right.

McCarthy denied that was his intent.

“That had nothing to do about faith. That was about Republicans versus Democrats,” he argued. “Michael Bloomberg put in $54 million into the campaign just in the last couple weeks in 24 districts. All I was pointing out was money that Republicans and Democrats were spending to defeat one another.”

But as Omar found out, there are certain associations that you need to avoid if you don’t want to be called an anti-Semite — the conjunction of Jews, money and influence probably being the biggest at this political moment.

A lot of Jewish groups tut-tutted McCarthy’s tweet, but it didn’t set off the sirens that greeted Omar’s comments from about the same time. If I were to guess why I would say it’s because a lot of those groups are more forgiving when it comes to a Republican Party that seems wildly supportive of the Israeli government — as opposed to Democrats and their small but growing cadre of Israel critics.

A transactional attitude toward hate speech undermines the credibility of the monitors. That’s true if you are a Jewish group willing to ignore or downplay the mainstreaming of white nationalist ideas, or a BDS supporter who refuses to hold members of your own party accountable for the kinds of language whose intent or consequence is to bait Jews or any other minority.

If you are only enraged by the anti-Semitism of your political enemies, then it’s hard to take your outrage seriously.