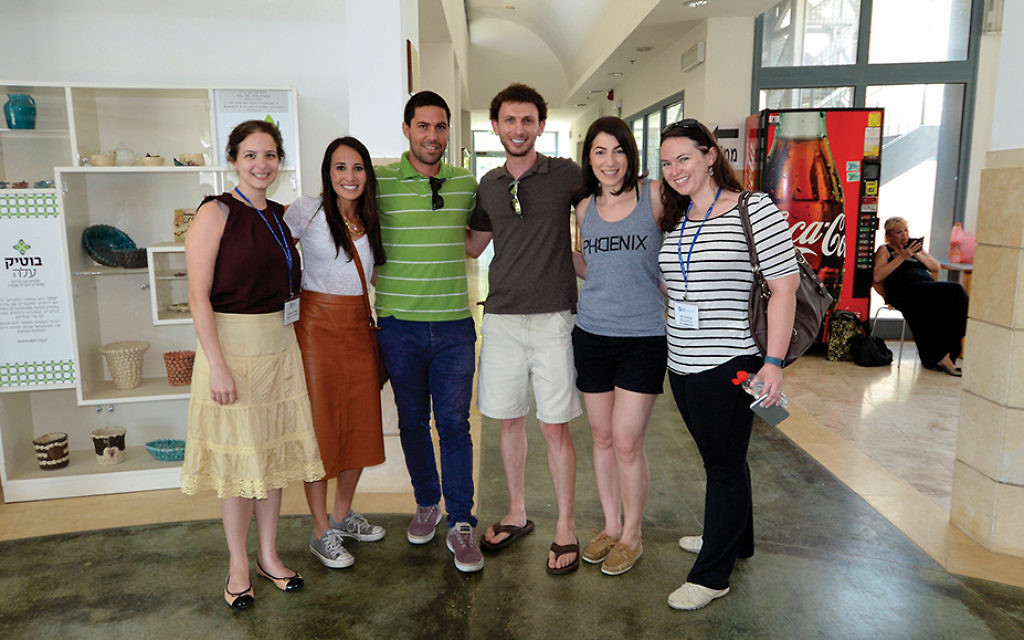 As a child, Lauren Kaufman-Bergmann, a political fundraiser in Washington, D.C., would bring her spare change to school to put in the iconic blue tzedakah boxes disseminated by the Jewish National Fund, a nonprofit founded in 1901 to fuel Theodor Herzl’s vision of a Jewish state in then-Ottoman-controlled Palestine.

“I was always aware of JNF through the blue boxes at my day school and planting trees for my bat mitzvah — the two standard calling cards of JNF,” said Kaufman-Bergmann, 29. “Supporting Israel in these small ways was a part of my Zionist identity from a young age.”

But after graduating George Washington University, Kaufman-Bergmann wanted a more significant way to get involved. Reaching out to some fellow young professionals, she helped launch the Washington, D.C., chapter of JNFuture, the century-old organization’s newest initiative to engage young leadership.

Today, JNFuture, an affinity group for people ages 24-40, is the organization’s fastest growing donor society. Launched in 2008, the initiative has 16 chapters nationwide and engages over 3,500 young adults annually.

Though fundraising organizations are sometimes wary of investing too heavily in young philanthropists for fear of meager payout, focusing on next gen participation has been a JNF priority for the past 10 years, said the organization’s CEO, Russell Robinson.

“The return on investment is not immediate, but we realized this was a long-term vision. Up front costs are high, but you’re putting someone in your seat 25 years from now,” said Robinson, who has led the organization since 1998. “Who’s going to be sitting around this board of directors table? That’s the question we’re asking.”

JNF’s “Billion Dollar Roadmap,” a 10-year investment plan, commits 25 percent of its proposed budget, or $400 million, to “Connecting the Next Generation.” While the majority of that sum is pledged to Zionist education and advocacy, $45 million will be allocated to leadership development through JNFuture and other initiatives.

“If you participated in planting a tree in Israel as a fourth grader, that wasn’t a fundraising campaign — that was a young leadership development campaign,” said Robinson. “Eighteen dollars to plant a tree isn’t how we’re going to make our money, but it is how we ensure our future. We’re creating continuum programming — not just to reach grade-school kids but to reach high school students, college students, young adults.”

Though JNFuture chapters first cropped up in major metropolises — New York and Los Angeles among them — in the past few years, others have been formed in smaller cities such as Denver, Austin, Detroit, Baltimore and Atlanta. Members of JNFuture commit to a minimum financial commitment of $360 dollars annually, and “Root Society” members, an advanced form of membership, commit a minimum of $1,000 annually. In some chapters, board members must also be Root Society members.

Amid a myriad of organizations vying for millennials’ loyalties, JNFuture manages to stand out by giving its young leaders “ownership” of the projects and fundraising efforts they take on, said Kaufman-Bergmann. Efforts to spearhead new chapters have been predominantly grassroots-led, she said, noting the benefits of ground-up organizing: “I learned more about the JNF’s projects and became enamored with the work.”

Another key factor that may make JNF’s efforts more appealing to young people is its emphasis on the environment, a critical concern for many 20- and 30-somethings. In 2015, JNF invested heavily in bolstering Israel’s water economy by developing alternative water sources. A pioneer in forest creation and fire prevention, the organization has planted more than 250 million trees across Israel covering more than 250,000 acres.

Other draws may be the fact that JNF is not focused on Israel’s politics and the social nature of the programs for millennials looking for community. Bar nights, annual galas and large Shabbat dinners in quirky locations — including the desert (Phoenix chapter) or the Central Park Zoo (New York chapter) — catch the interest of young professionals.

“That’s how I got roped in,” laughed Jonathan Gertman, the vice-chair of JNFuture’s New York board. “A friend from college convinced me to come with her to Shabbat in the Park and the rest is history,” the 29-year-old real estate developer said.

“My involvement [in JNFuture] was my ticket back into Jewish engagement,” said Josh Berkowitz, a national board member and founder of the South Florida chapter. Berkowitz, who grew up Conservative, said he “fell off the Jewish circuit” as a teenager. “As a high school student, assimilation sounded like a really great idea to me,” he said, adding that headlines about the violence committed against Israeli civilians during the second intifada “woke me up.”

“I needed a new way to make my connection to Israel my own,” he said. “There was more to this country than what I was seeing on CNN.”

For others, JNF’s mission to plant trees across Israel provides a refreshing respite from the region’s political charge.

“It’s a relief to check politics at the door,” said Civia Caroline, a chair on JNFuture’s national board and a founder of the L.A. chapter. “We try to keep the conversation strictly apolitical. It’s for those who believe in Israel as a Jewish homeland, but think that’s where the conversation should end.”

Caroline, who grew up Orthodox, said JNFuture also has a strong interdenominational pull.

“Growing up, Israel was always just a part of my life I took for granted — it wasn’t something I had to work on or think about,” said Caroline, 34. “But after I started becoming less religious than my family, I had to rethink my connection [to Israel].”

Though she initially associated JNF with “blue boxes and trees,” she discovered the organization was, in fact, a fresh way to connect that keeps politics and religion out of “the Israel conversation,” she said, giving her the “space for the first time” to think of Israel primarily “as a Jewish homeland.”

Many JNFuture leaders acknowledged the difficulty of convincing their peers that the financial buy-in is “worth it” — fixed-fee membership is notoriously unpopular among millennials, according to a recent UJA-Federation of New York study on voluntary pledging. Responding to the concern, synagogues across the country are entertaining alternative dues models in order to lure 20- and 30-somethings.

“My peers were definitely skeptical in the beginning,” said Caroline. “JNF is essentially a fundraising organization, and some suspicions are naturally going to come along with that. But it’s important, especially for the younger generation, to feel a sense of responsibility to Israel’s future, and the future of the organization,” she said. Investment, she finds, engenders loyalty. “As a lay-leadership, we have a lot of power,” she said. “There’s a sense that this is our money — we’re not just giving money and some guy in a high up office decides what to do with it.”

Simon Schwartz, a JNFuture national board member and chair of the Denver chapter, also noted the importance of feeling independent from the organization’s longtime leaders. He was drawn to the many programmatic options provided by JNF — like green innovations, new solutions to water problems and community building in Israel’s periphery — offering new members an opportunity “to find out what you’re passionate about.”

“As a member of the next generation, it really spoke to me that I didn’t have the older generation telling me what I should do and what I was supposed to do.” Instead, he said, “It was: ‘This is what we’ve been doing so far. Where do you find yourself fitting into this plan?’”