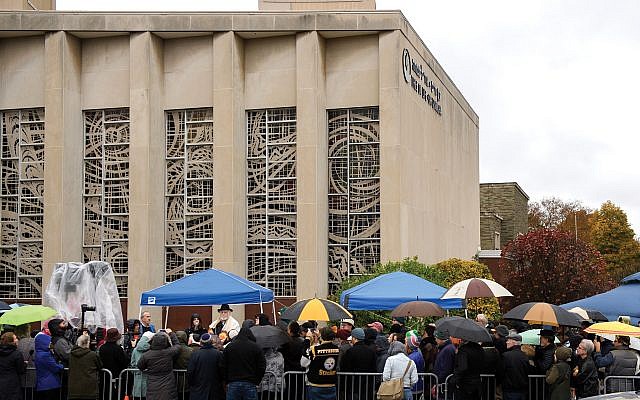 Pittsburgh Jewish officials say they want to compile a guide for communities that may face a similar kind of tragedy that struck the Tree of Life Synagogue. Getty Images

It’s been just over a month since 11 worshippers were killed in a Saturday morning massacre at the Tree of Life synagogue in Pittsburgh. But for leaders of Jewish organizations across the country, and for the Squirrel Hill community and Jews everywhere — where anti-Semitic fliers were discovered on the streets just last week — the event is still fresh in their minds.

“The Jewish world feels this in their kishkes,” Jeff Finkelstein, CEO of the Jewish Federation of Greater Pittsburgh, told The Jewish Week.

Finkelstein shared his reflections on the Jewish community’s response to the attack last week in a phone conference organized by JPro Network, the Jewish professional network.

According to JPro executive director Ilana Aisen, the call brought together Jewish communal professionals in far-flung communities who may not have supportive networks where they live. This was the second call organized by JPro in the wake of the Pittsburgh shooting; the first was scheduled the week following the shooting. “We knew that people who worked in, say, a large federation, had a staff meeting on Monday morning, but folks who are in smaller communities don’t necessarily have that,” Aisen told The Jewish Week.

Finkelstein told participants that a security training offered by the Pittsburgh federation helped save lives at Tree of Life. After the federation’s security specialist recommended that someone in the building carry a cellphone every Shabbat in case of emergency, Tree of Life Rabbi Jeffrey Myers, who is Shabbat observant, decided to carry his cellphone each week. His was the first call to the police on the morning of the attack.

Just this week, the Jewish community of Toledo, Ohio, was breathing a sigh of relief after the FBI announced the arrest of an Ohio man who was planning to attack a synagogue in the Toledo area. According to the FBI, the man, Damon Joseph, 21, said he was inspired by the Tree of Life attack.

Aisen anticipates that the issue of emergency response may become more central to JPro’s work in the coming year. “I anticipate that some of our 2019 programming will include conversations about emergency and disaster response,” said Aisen. “When we build community, it serves us well in times of tragedy and in times of joy.”