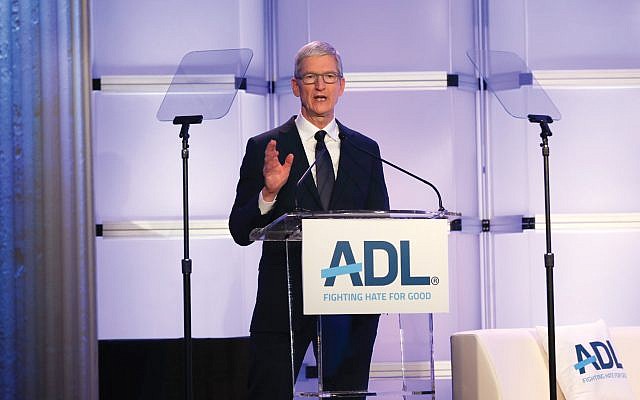 Apple CEO Tim Cook was given the ADL’s Courage Against Hate Award for his company’s work to keep hate speech off Apple’s platforms. Courtesy ADL

Since the Pittsburgh synagogue massacre jolted the reality of anti-Semitism into the consciousness of American Jews, the Jewish community has been wavering between sending a message of strength and safety while simultaneously raising the alarm on the rising threat to Jews.

That dynamic was on display at the Anti-Defamation League’s annual Never Is Now conference, a day dedicated to discussions on anti-Semitism and other forms of hate.

The gravity of the recent attack in Pittsburgh, during which 11 worshippers were killed during Shabbat morning services at the Tree of Life Synagogue, loomed large at the conference. But contrasted with the particular pain of an anti-Semitic attack was the suggested remedy: to come together with other groups suffering from xenophobic hate to combat all forms of intolerance.

“Anti-Semitism isn’t a Jewish problem, it’s everyone’s problem,” ADL CEO Jonathan Greenblatt told The Jewish Week at the conference. “We have to find common ground with other groups to stand with them as we ask them to stand with us.”

The conference, which was held Dec. 3 in the Chelsea section of Manhattan, began with a video of news clips from the day of the Tree of Life massacre. After reading out a long list of anti-Semitic incidents from this year, Greenblatt harped on the urgency of ending hatred against Jews. “What happened in Squirrel Hill was shocking but not surprising,” said Greenblatt. “This must end, all of it.”

Greenblatt made a point of calling out those who use anti-Semitic speech and dog whistles from every political persuasion, referring to a recent controversy over ties between leaders of the Women’s March with Nation of Islam leader Minister Louis Farrakhan. He did not spare President Trump, either, though he carefully avoided using his name. “Whether you sit in the Oval Office or the C-suite or behind the dean’s chair at a university, it’s time to denounce anti-Semitism clearly, once and for all,” Greenblatt said.

“I’ve seen a normalization of swastikas in my five years as regional director, and I’m afraid that we’re starting to see normalization of assaults,” Evan Bernstein, regional director of the New York and New Jersey office, told The Jewish Week at the conference, referring to recent attacks on chasidic men and children in Brooklyn. “This conference was important before, it was important three years ago, but it’s gotten progressively more important because anti-Semitism has taken different forms and it’s growing.”

“[George] Soros has become the Rothschild of the 21st century,” said Lipstadt of the billionaire patron of liberal causes. “It’s very difficult to speak about ‘the globalists’ … and not hear echoes of every anti-Semitic slur from throughout the ages,” Stephens said.

New Jersey Sen. Cory Booker introduced his state’s attorney general, Gurbir S. Grewal, the ADL Blum-Kovler Nation of Immigrants awardee, receiving multiple rounds of applause for his calls to fight anti-Semitism. “You can’t just say, I’m not an anti-Semite,” said Booker. “You have to be anti-anti-Semitism.”

Breakout sessions covered familiar topics like distinguishing between anti-Semitism and anti-Zionism, anti-Semitism in Europe, immigration, and fighting online hate. One panel discussed racial and ethnic diversity in Jewish spaces while another focused on respect and empathy in digital spaces and featured a video game live-streamer.

At a session on anti-Semitism on campus, panelists assured participants that BDS resolutions have not turned American college campuses into the bastions of anti-Semitism many fear. “It’s not impacting the daily lives of students,” said Kendall Coden, a student leader at University of Michigan, where two professors recently refused to write letters of recommendation for students planning to study abroad in Israel. “Yes, there was an incident with the rec [recommendation] letter, but we also have a vibrant Jewish community where 1,600 students came together for Shabbat dinner.”

Rabbi Yehuda Sarna, executive director of the Bronfman Center for Jewish Student Life at New York University, emphasized the need to build bridges between the Jewish community and other marginalized groups on campus. “It’s really about showing up for other people,” said Rabbi Sarna.

Combating online hate, an area of interest for Greenblatt, was a major topic of conversation. The ADL’s 2018 Courage Against Hate Award went to Apple CEO Tim Cook in recognition of his company’s work to keep hateful speech off Apple platforms. Apple has been praised for its strong stance against hate speech, especially compared to social media giants Twitter and Facebook.

Cook, who was greeted onstage by a standing ovation, accepted the award “not as a recognition of what we have done, but as a reminder of what we still have to do,” he said. “At Apple, we believe technology needs to have a clear point of view on this issue. … At Apple, we’re not afraid to say our values drive our curation decisions.”

The conference closed with a panel dedicated to Pittsburgh. “This was never the ending we anticipated,” said Jeremy Pappas, director of the ADL’s Cleveland office which also serves Pittsburgh. “But today, in 2018, we know that we can’t take anything for granted.”