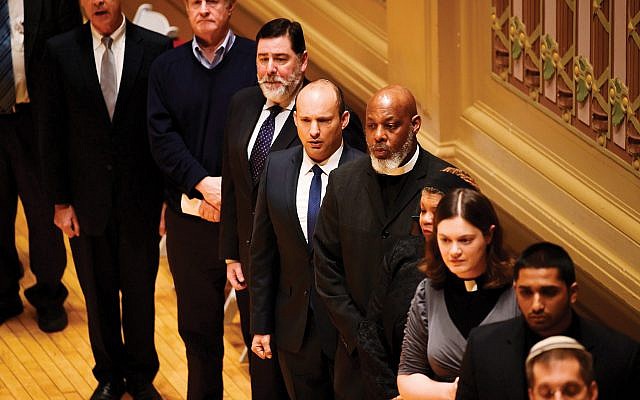 Israel’s education minister, Naftali Bennett, speaking at a vigil in Pittsburgh on the Sunday night after the attack. His trip to the U.S. was criticized in some quarters. Getty Images

Tel Aviv —  The Hebrew-language news coverage of the shooting sounded familiar, as if it were from the scene of a local terrorist attack. There were phone interviews with eyewitnesses and emergency workers, and speculation about the victims.

But the fatal shooting that killed 11 worshippers didn’t occur in Jerusalem or in Paris — it happened in a Conservative synagogue in Pittsburgh on Shabbat morning. Unlike the usual peripheral coverage of American Jewry, news of the shooting became top news and a bone of contention this week in Israel.

A controversy over Israel’s Chief Ashkenazi Rabbi David Lau’s statement regarding the Pittsburgh tragedy underscored the tensions between the Orthodox and liberal movements and how their differences are dealt with politically. In an interview Monday with Makor Rishon, a religious newspaper, Rabbi Lau was emphatic in expressing deep regret that Jews were targeted, noting that they were with Sefer Torahs, and at prayer with prayer shawls and prayer books when they were murdered. Goaded by the press to comment on the victims being Conservative Jews, the rabbi said the issue was “irrelevant. … Does it matter in which synagogue they pray or what the text of their prayer book says?”

PM Netanyahu's Remarks at the Start of the Weekly Cabinet Meeting:

Ministers stood and observed a minute of silence at the start of the weekly Cabinet meeting in memory of those who were murdered in Pittsburgh yesterday.Prime Minister Benjamin Netanyahu made the following remarks at the start of the weekly Cabinet meeting:"The entire people of Israel grieve with the families of the people who were murdered in the shocking massacre at the Tree of Life synagogue in Pittsburgh. On behalf of myself, the Government of Israel and the people of Israel, from the depth of our hearts, I send our condolences to the families who lost their loved ones. We all pray for the swift recovery of the wounded.It is very difficult to exaggerate the horror of the murder of Jews who had gathered in a synagogue on Shabbat and were murdered just because they were Jews. Israel stands at the forefront with the Jewish community of Pittsburgh, with all Jewish communities in the US and with the American people. We stand together, at the forefront, against anti-Semitism and displays of such barbarity.I call upon the whole world to unite in the fight against anti-Semitism everywhere. Today, regretfully, we refer to the United States, where the largest anti-Semitic crime in its history took place, but we also mean, of course, Western Europe, where there is a tough struggle against the manifestations of a new anti-Semitism. Of course there is also the old and familiar anti-Semitism, and that of radical Islam. On all these fronts we must stand up and fight back against this brutal fanaticism. It starts with the Jews, but never ends with the Jews.On Friday, my wife and I returned from a historic diplomatic visit to Oman. I met with the leader of Oman; Sultan Qaboos bin Said, a very experienced and impressive man. This is Israel's first official visit to Oman in 22 years. This visit comes against the background of diplomatic efforts that I have been promoting in recent years vis-a-vis the Arab countries. In our long meeting we discussed in detail the challenges facing the Middle East. These were important talks – both for the State of Israel and very important talks for Israel's security. There will be more.We are after a weekend of air strikes in Gaza. Yesterday we heard about an 'ultimatum' from Hamas to Israel. At no stage will Israel accept any ultimatum from Hamas. Israel will continue to act in accordance with Israeli interests and for Israel's security alone. "(Video: Omer Meron GPO. Sound: Ben Peretz, GPO)

Posted by The Prime Minister of Israel on Sunday, 28 October 2018

The fact that the rabbi said the attacker chose the Tree of Life synagogue because “it is a place with a pronounced Jewish identity” and that ultra-Orthodox newspapers referred to the site as simply a “Jewish center” upset many liberals who asserted that the Chief Rabbi avoided calling Tree of Life a synagogue — precisely the kind of ideological controversy he sought to avoid. In the interview he asserted that “there is nothing to discuss about their affiliation. They were killed because they were Jews.”

Prime Minister Benjamin Netanyahu, who has been criticized for bowing to demands of ultra-Orthodox parties in his coalition at the expense of liberal Jewish denominations, said that Israel stands united with the Jewish community of Pittsburgh against anti-Semitism.

“Jews were killed in a synagogue,” Netanyahu wrote in a tweet. “They were killed because they are Jews. The location was chosen because it is a synagogue. We must never forget that. We are one.”

When asked about Israel’s reaction to the attack, Ester Diner, a 68-year old retired social worker said the chief rabbi’s refusal to acknowledge Tree of Life as a synagogue had angered her.

“It’s a disgrace that Jews don’t want to accept the Conservative and Reform as part of the Jewish people. It’s racist,” said Diner. “Anti-Semitism is all over the world. It doesn’t matter where you are.”

The debate over the status of Americans Jews and the Reform and Conservative denominations came to a head last year when Netanyahu cancelled a compromise with them to upgrade and formalize a prayer area for non-Orthodox Jews at the Western Wall in Jerusalem’s Old City. The attack in Pittsburgh spurred calls for the Israeli government to do more to embrace those liberal streams.

“The fitting Zionist response to the massacre in Pittsburgh is to re-ratify the Western Wall agreement,” wrote Itay Vered, a newscaster on Twitter. “Conservative and Reform Jews, who account for most of American Jewry, should know that they are not rejected by the state of the Jews.” 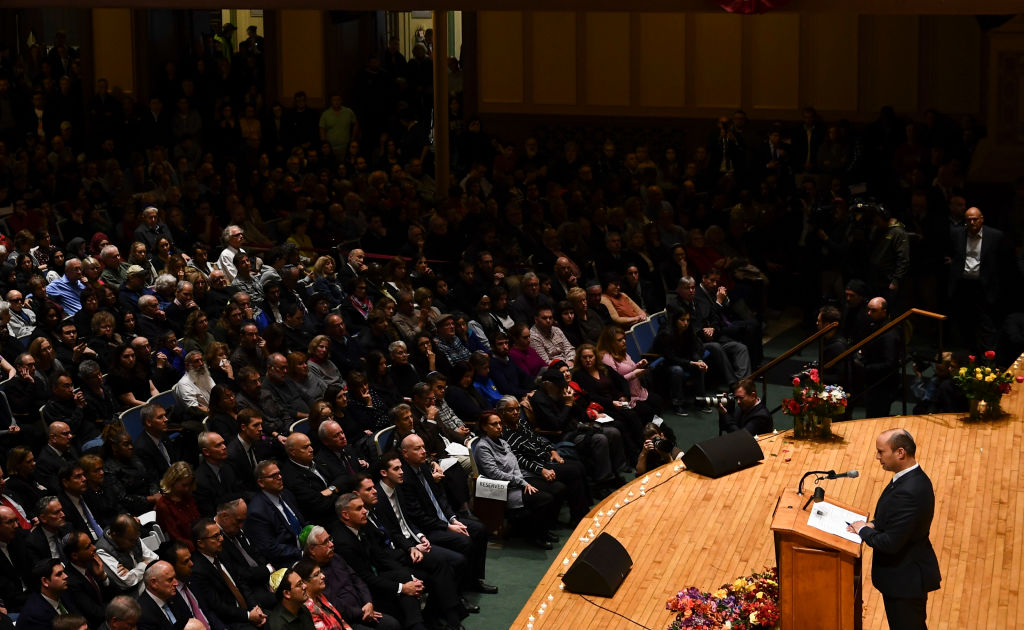 Naftali Bennett, Isralil Minister for Diaspera Jewish Affairs, speaks during a vigil, to remember the victims of the shooting at the Tree of Life synagogue the day before, at the Allegheny County Soldiers Memorial on October 28, 2018, in Pittsburgh, Pennsylvania. Getty Images

Yair Lapid, leader of the centrist Yesh Atid party, attended a memorial ceremony on Monday night in Jerusalem along with Tzipi Livni of the Zionist Union, Jewish Agency Chairman Isaac Herzog and Tzachi Hanegbi of Likud at the Conservative Moreshet Yisrael synagogue. Lapid criticized the government as responsible for the rift between the diaspora and Israel for pushing policies that were driven by “narrow coalition-based consideration rather than the good of the Jewish people.”

Education Minister Naftali Bennett’s decision to travel to Pittsburgh in solidarity stirred more criticism back at home over the policies of the government on religion and state — and over the Netanyahu governments embrace of the Trump administration.

Bennett, who is also minister for diaspora affairs, said in a statement, “the murderer didn’t ask the Jews what denomination they belonged to. … We are one people. We embrace every Jew as a Jew.”

While many Israelis said Bennett made the right decision to go, they also noted that Israeli leaders needed to re-examine their approach to liberal Jewish denominations and what some see as the catalysts of the current upsurge in anti-Semitism in the U.S.

“Those wishing to express solidarity must confront the fact that the murderer wrote blasphemous things not just against Jews, but against the liberal values held by most of the American Jews,” wrote Gilad Kariv, the director of the Reform movement in Israel, in the online news site Ynet.

“Israeli elected officials wishing to stand by the Jewish community in this time of pain can’t do this honestly if they aren’t willing to face the connection between the rise in anti-Semitism, the deterioration of the political discourse in the U.S. and the dangerous dance of President Trump with nationalist right-wing elements.” 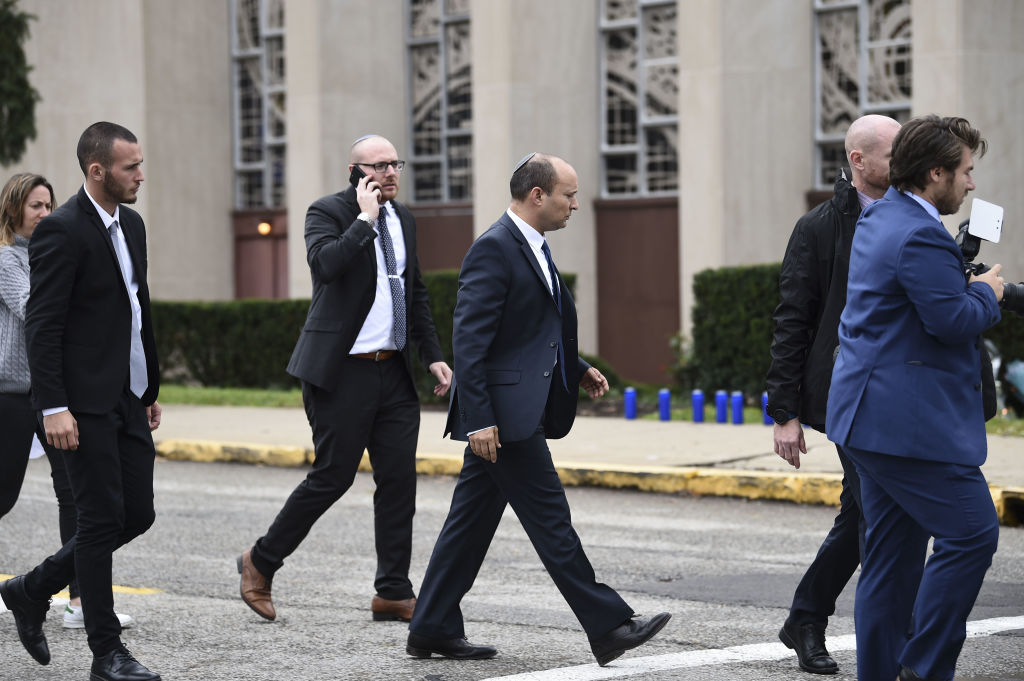 Israeli Education Diaspora Affairs Minister Naftali Bennett(C) arrives on October 28, 2018 outside of the Tree of Life synagogue after a shooting there left 11 people dead in the Squirrel Hill neighborhood of Pittsburgh on October 27, 2018. Getty Images

He added, “Those wishing to express solidarity with the Conservative community in Pittsburgh must ask themselves how this solidarity is expressed even when there aren’t dead bodies strewn before them.”

In an editorial, the liberal Haaretz newspaper went even further, calling Bennett’s solidarity visit an act of hypocrisy.

“He is a minister in a government that’s hostile toward refugees and rejects the legitimacy of Reform and Conservative Jews,” the editorial said.

The editorial also argued that “much of the Israeli and international public feels discomfort with the embrace that Netanyahu’s government gives to illiberal European leaders and the near symbiotic relationship with Donald Trump, who has carried the banner for the fight against immigrants.”

But politicians from the left of Israel’s political spectrum insisted that the Israeli leadership needs to confront the incitement coming from the President Trump. 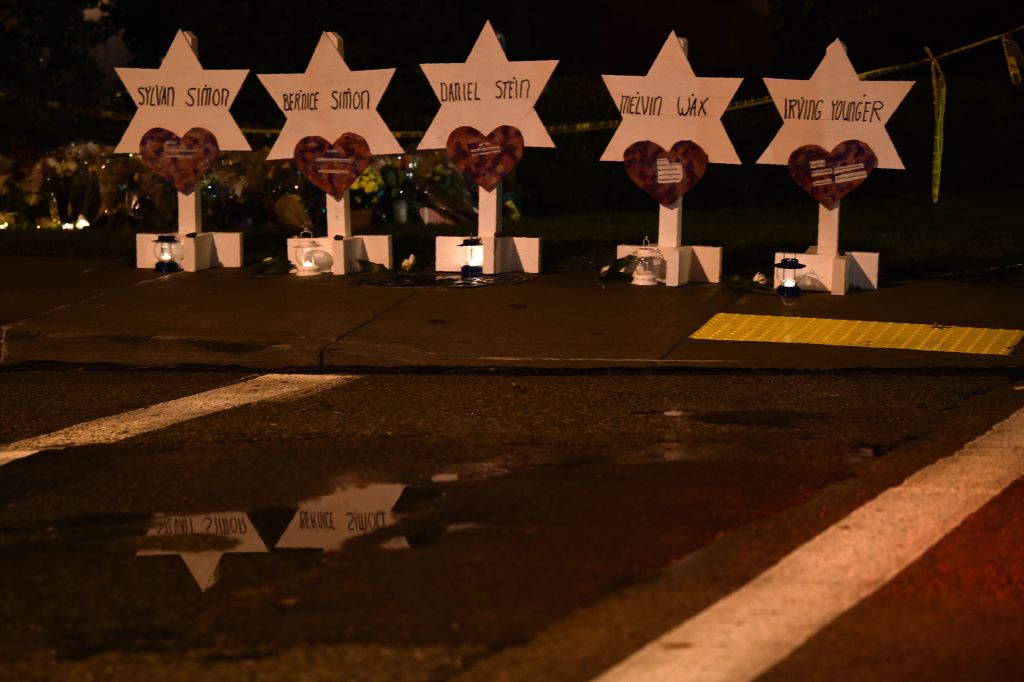 The names of the victims are displayed at a memorial on October 28, 2018 outside the Tree of Life synagogue after a shooting there left 11 people dead in Pittsburgh on October 27. Getty Images

“The president is giving momentum to forces of nationalism, white supremacy, racism and anti-Semitism. And this evil wind is felt in many places. It’s very problematic,” said Dov Khenin, a Knesset member from the United Arab List.