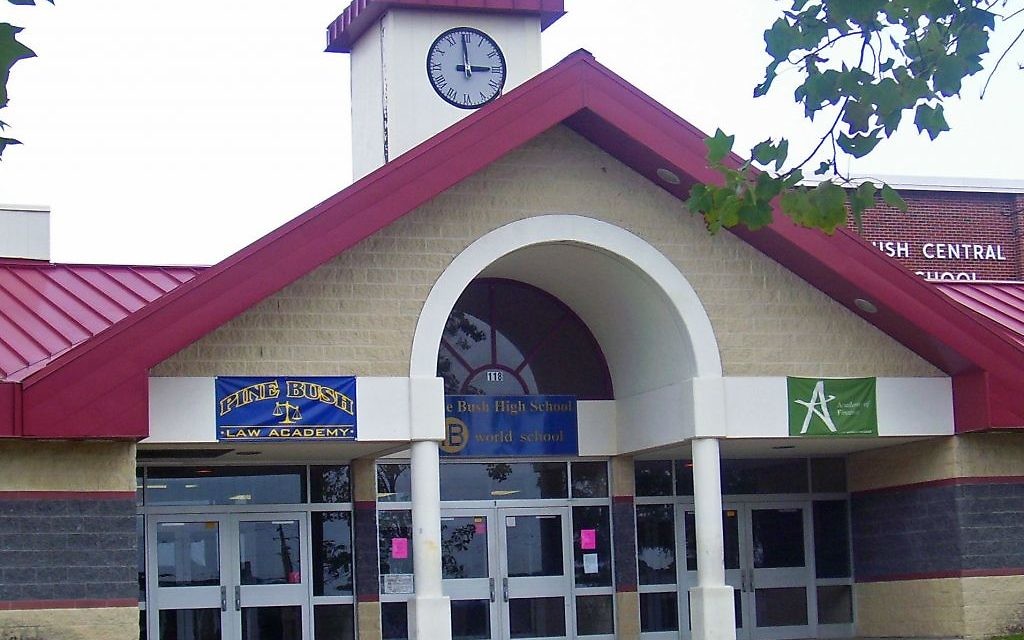 The Pine Bush Central School District in upstate New York has agreed to pay $4.48 million to settle a federal suit alleging the district was deliberately indifferent to the anti-Semitic bullying and harassment five of its Jewish students suffered over several years.

As part of the agreement, the school district today posted on its website a joint statement with the plaintiffs in which they announced the settlement. It said the agreement calls for the district to develop a comprehensive plan to address anti-Semitic harassment in the school system. In addition, the district committed itself to “continue its efforts at strengthening tolerance and anti-bullying initiatives.”

The students, from three families, claimed in their 2012 suit that the “anti-Semitic discrimination and harassment was a relentless and inescapable aspect” of school life and that each “has been psychologically traumatized, and some have suffered physical harm.”

In court papers, students said anti-Semitic incidents “happened on a daily basis” including swastikas “all over the high school” and on students’ clothing, name-calling including “kike,” “stupid Jew” and “f—-g Jew.” Holocaust jokes, Hitler salutes and white power chants were common.

One student reported being punched in the stomach, spat upon, slapped in the face, pelted with change. Another said a student held her hands behind her back while another tried to shove a quarter down her throat. Students constantly pretended to salute Hitler and sang “white power songs” in the cafeteria about “killing Jews and washing off their blood,” according to court papers.

“Every day seemed like it was the wors[t] day of my life, and when I got home I was constantly considering just killing myself … and when I had to go to school the next day and the torture persisted, I kicked myself for not doing it when I had the chance,” one student testified in court.

White Plains Federal Judge Kenneth Karas is scheduled to hold a hearing July 9 to approve the settlement because two of the five children are under the age of 18, according to Adele P. Kimmel, senior attorney with Public Justice, who served as co-counsel in the case.

She said that of the five students, only one remains in the Pine Bush School District. That student is slated to enter the last year of high school in the fall. Another of the five was pulled out of the district in middle school by his parents, who home schooled him instead.

The identities of the children have never been made public, but the parents of the two minor children are expected to make a statement to the court at the July 9 hearing.

Although the school district did not admit any wrongdoing, Kimmel told The Jewish Week that “the agreement speaks for itself.”

It calls for the district to pay the three families $3 million in compensatory damages, including all claims for injury, and stipulates that their attorneys would receive an additional $1.48 million.

In the agreement, the district agreed also to implement a series of steps to “to eliminate and prevent future instances of anti-Semitic harassment in its education programs and activities.”

To do that, it plans to revise its “harassment policies,

appropriately and immediately respond to all conduct that may constitute anti-Semitic harassment, ensure it fully investigates reported and observed conduct that

may constitute anti-Semitic harassment, escalate remedial efforts by instituting additional measures when students are harassed on a repeated basis, and mitigate the

effects of harassment that occurs.”

In addition, the district agreed to “take proactive measures to address anti-Semitic incidents and issues in the school climate that have arisen or may arise from and/or contribute to a hostile educational environment.”

It promised to also “review and revise its policies regarding

discrimination, bullying and anti-harassment to ensure that the District’s polices cover anti-Semitic harassment.”

Kimmel called the reforms the district agreed to make “substantial” and she said they are “a blueprint for what school districts should be doing to address bullying in schools — they are translatable to all forms of harassment.”

Asked about cyber-bullying, she said it “substantially disrupts the atmosphere in the school,” and therefore the district is obligated to deal with it.

She noted that both students and teachers would now be mandated to learn about this issue and that the U.S. government would be reviewing the district’s actions for the next three years, as well as Judge Karas.