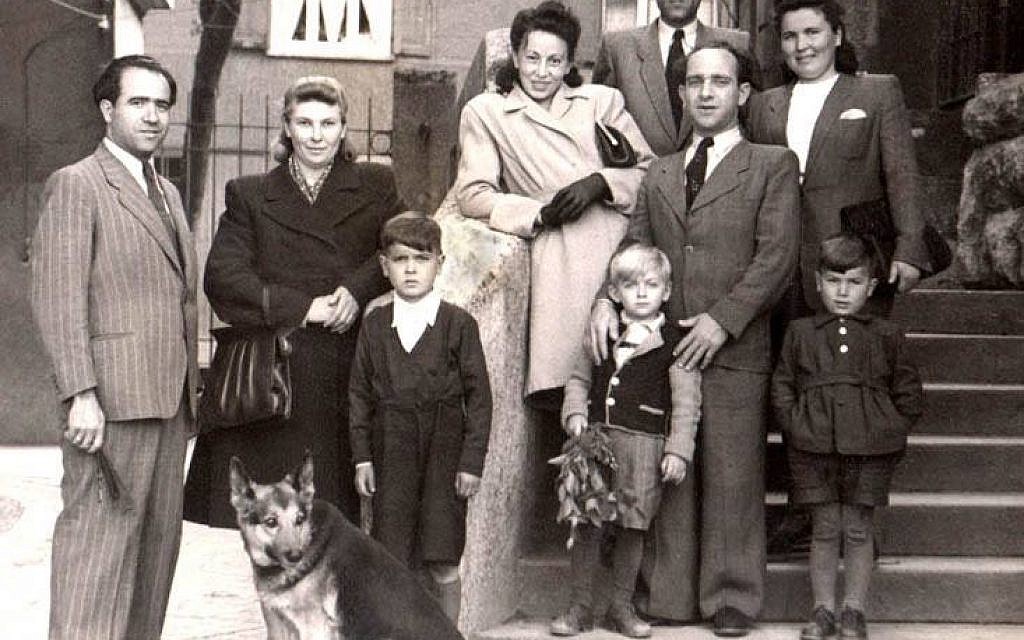 For Adam Gell, a high school physical education teacher in Brooklyn, the documentary he finished making a few months ago was an exercise in memory.

As a kid growing up more than four decades ago in the Georgetown section of southern Brooklyn, Gell would walk the block and a half after school a few times a week from his parents’ home to the apartment of his paternal grandmother, Lidia Gell.

Lidia, who was born in Russia (original last name: Senkina) and came to the United States in 1951, would affectionately call her grandson “Adamchik.”

“Grandmachik,” as young Gell would in turn call his grandmother, fed him warm meals and a heaping of nostalgia on his frequent visits, offering personal advice and showing Gell her prized photos albums from the life she had left behind.  The albums held pictures of long-gone relatives and the snowy woods of her homeland.

One day Gell, 53, a Brooklyn College graduate who now works at Marine Park Junior High School, his alma mater, and lives on Staten Island, spotted in one of the albums a black-and-white photo of a young soldier in a Red Army uniform. 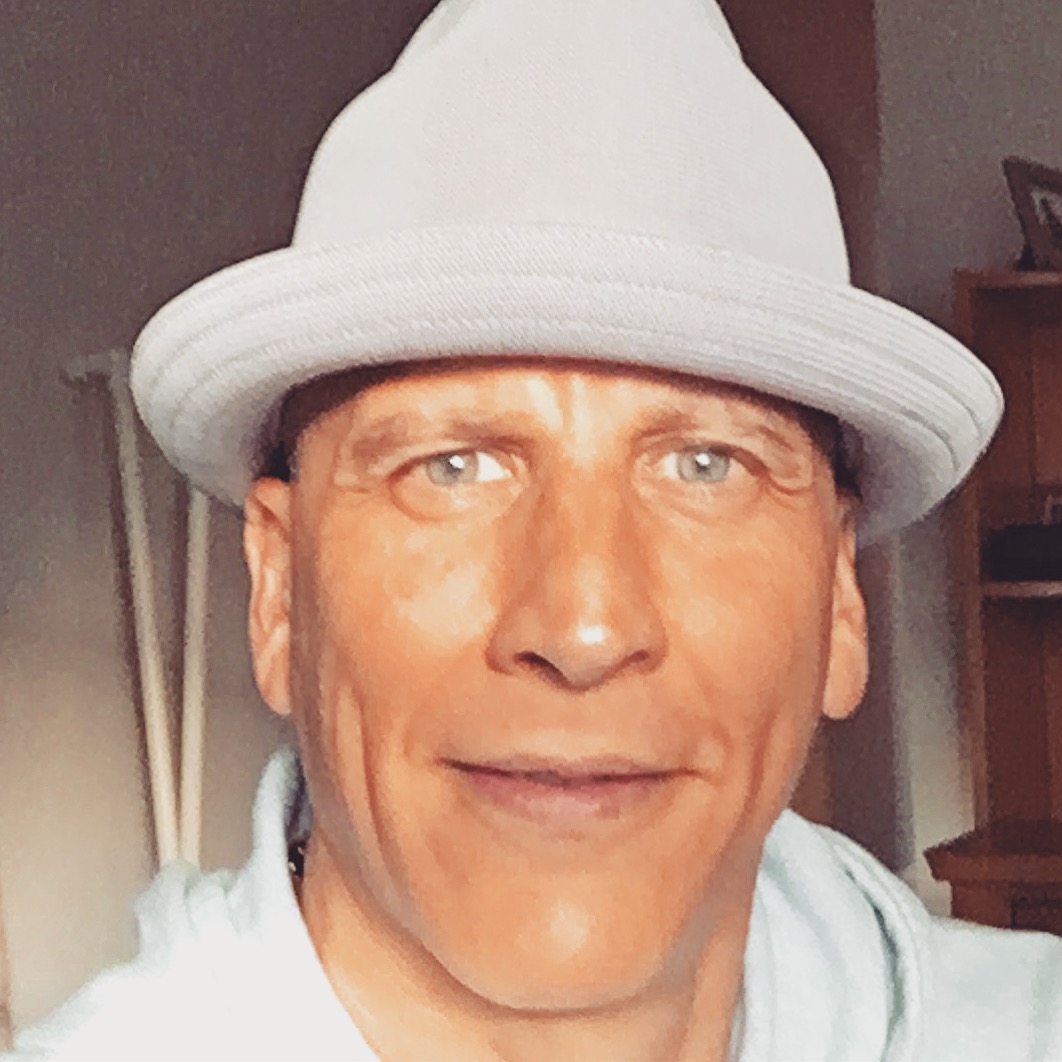 A physical education teacher, Gell taught himself the art of documentary production to honor the memory of his grandparents. PHOTOS COURTESY ADAM GELL

“That was your grandfather,” his grandmother answered.

“No, it’s not,” Gell protested – the blond soldier (“He was a handsome guy.”) didn’t look anything like his dark-haired grandfather, Noel Gell, who it turned out was Adam’s step-grandfather.

Lidia explained that the soldier, Nikolai Vickentevich Turubanov (Lidia called him Koyla), was her first husband, her first love, who had been killed, at 20, while serving as a ski soldier during the frigid battle of Moscow on Feb. 8, 1942.

After Nazi Germany broke its peace pact with communist Russia, invading its former ally in June 1941, the Russian army deployed 11 battalions of soldiers who traveled the snow-covered fields and slopes surrounding the capital, outfitted in white camouflage uniforms and masks, rifles slung over their backs.

The Red Army lost an estimated several hundred thousand soldiers in the Battle of Moscow; Koyla was one of the last Russian casualties.

Lidia rarely talked about Koyla; when she did, tears came to her eyes. 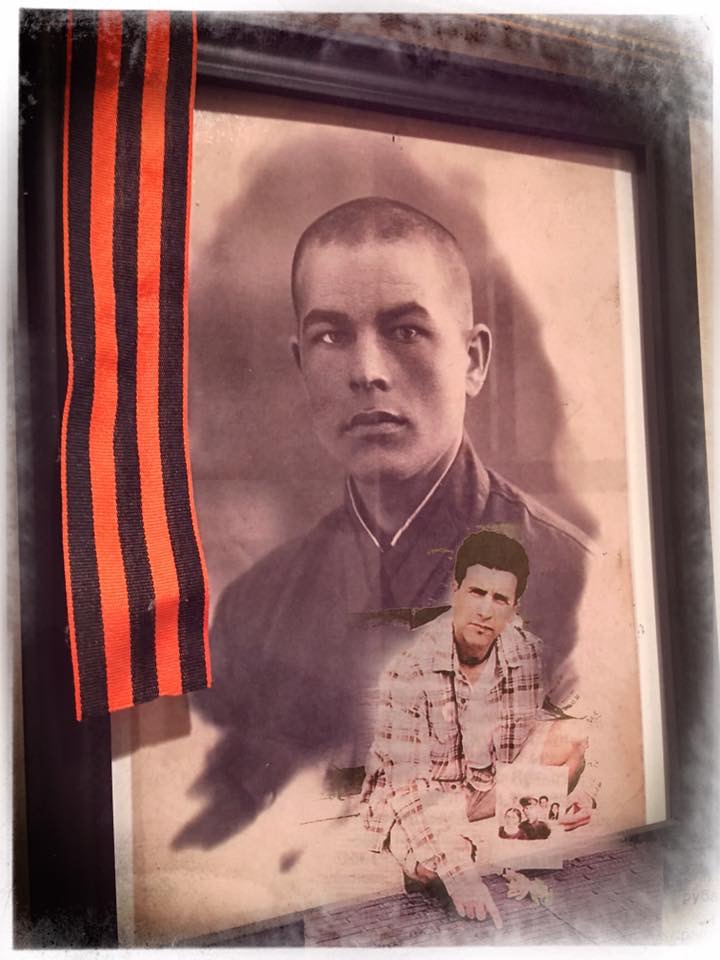 Adam Gell poses in front of a photograph of his grandfather, a Red Army soldier who was killed in World War II. PHOTOS COURTESY ADAM GELL

Lidia, who died at 82 in 2001, would ask her grandson, “When I am not here anymore, who will remember me? Who will tell my story?”

Gell would, he decided. “I loved her dearly. I felt a need to continue her legacy. It was my responsibility.”

He was also intrigued by the gaps in the story of the grandfather he knew only through a few fleeting memories shared by Lidia.

A history buff, he didn’t know the next step to take.

Then, in 2008, he read a book of letters written by soldiers in the Russian Army during WWII. Some, with death lurking as an ever-present danger, told their wives – should they become widows – to take good care of the couple’s children. That reminded Gell of a letter that Koyla had written Lidia in his final days.

And he watched several wartime documentaries. “I felt I could do that, as well.”

Gell, who has also worked as a professional photographer, decided he would put that ability to use – he would make a documentary about Lidia and Koyla. He would honor Lidia’s wish.

The result in “Forgotten” a self-produced, hour-long documentary that will premiere here this month. The choice of a title was obvious, he says: “I didn’t want them to be forgotten.”

To make the documentary, Gell learned some Russian, formed a production company, searched for relatives on the Internet, carried family pictures to facilitate access with relatives, and arranged for the translation of hand-written diaries his grandmother had written in Komi, a dialect of the Uralic language group spoken in parts of northeast Europe and northwest Russia. 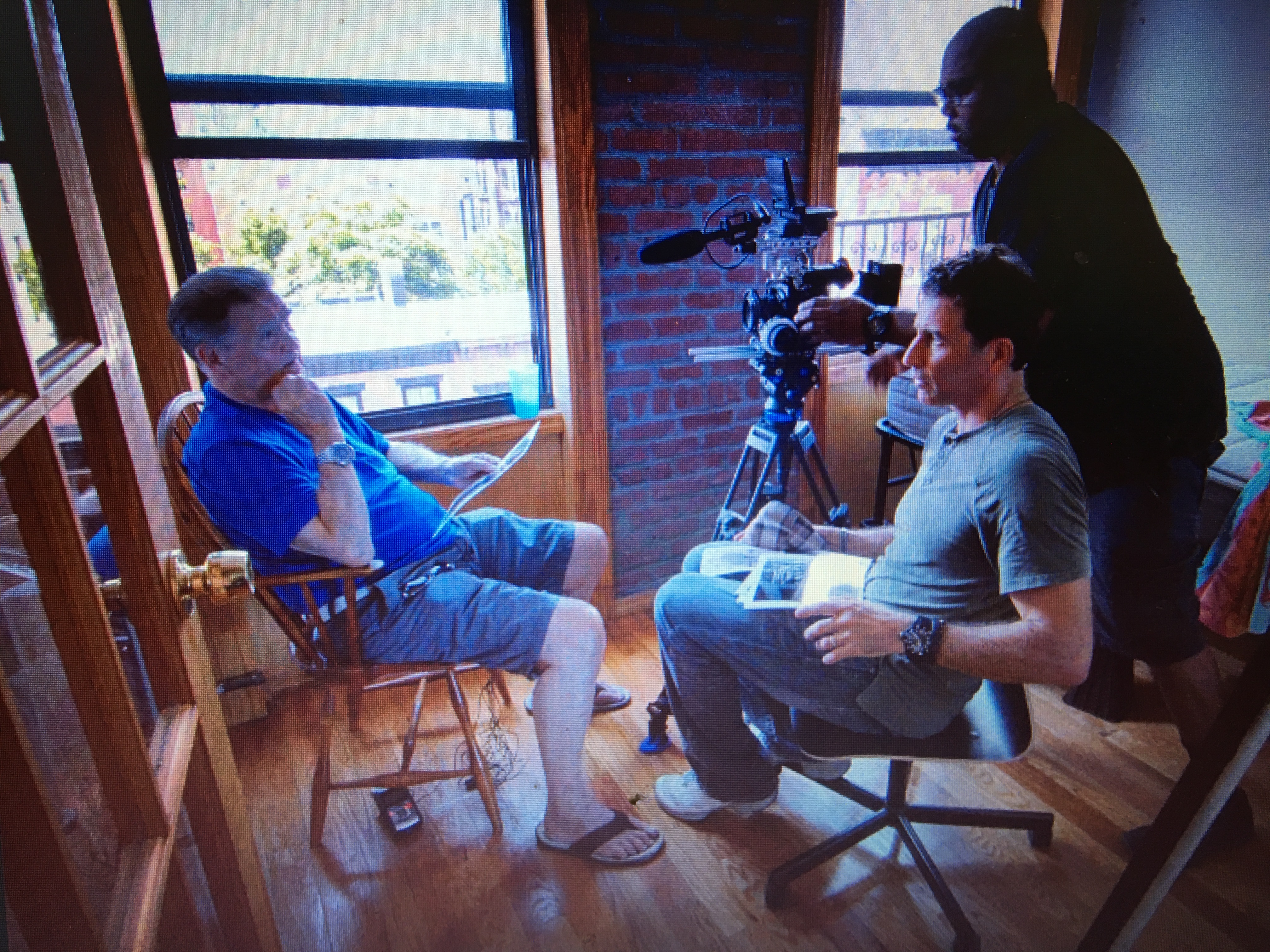 In “Forgotten” Gell, who did his documentary-related travel during summer vacation, finds the graves of his grandfather and great-grandparents, unites with relatives he had never known existed, retraced his grandparents’ footsteps, learns that Lidia ripped her hair out when a letter informed her that Koyla had been killed, visits the DP camp in Germany where Lidia and Noel, a shoemaker, met, discusses how his “long journey” has helped him heal from the estrangement of his two children, and relates the Holocaust backstory of Polish Jews like his step-grandfather, Noel (original name Galicki), who died in 1996.

Lidia, an ethnic Russian, came from a Christian family, Russian Orthodox, that became typically communist atheistic. While spending her life with Noel, she led the life of a standard Jewish grandmother, attending synagogue services and learning to make Jewish food like chicken soup and matzah balls.

Does Gell consider his documentary a Jewish work?

“It’s a cultural production with a Jewish taste,” he says.

He did the filming, the editing, the sound mixing, the narration, the dramatic recreations and the writing on the documentary, which he says cost about $7,000-$8,000 — “maybe $10,000” — to produce, a pittance by any standard; most of the funds came out of his own pocket, and a little from online crowdfunding. “The only thing it cost me was time.”

“I did everything myself,” he says. “It was all self-taught.”

How does a phys ed teacher, with no cinematography training, who as a kid aspired to become a professional baseball or hockey player, make a quality documentary, which he has entered in several film festivals?

As a photographer, he says, he recognizes good images. “I know lighting.” And he knew a compelling story. “When a person is passionate about something, nothing is impossible.” 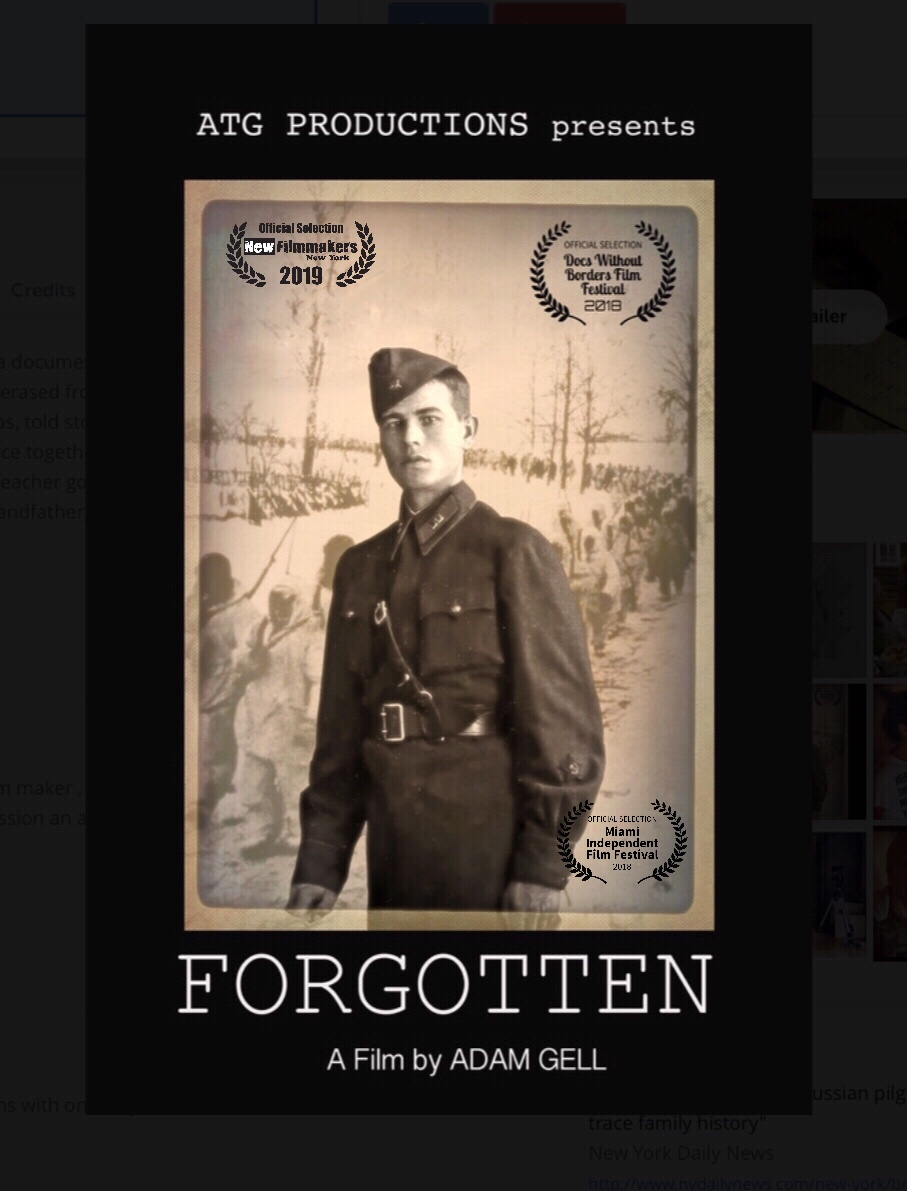 Alexandr Rozenberg, a Kiev-born cameraman now living in Brighton Beach, served as a translator for some of Gell’s interviews in Brooklyn with Russian-speaking men and women. He calls Gell “a hero. He has a very big heart.”

Gell’s documentary, says Rozenberg, accurately shows the background — and sacrifices — of soldiers who were in the Russian army during World War II; Rozenberg’s father, Leonid, was one of them — Leonid Rozenberg has been active in Russian veterans’ activities here.

“Nobody has brought the memory of these people alive like Adam does,” Rozenberg says. “It’s very important for the veterans.”

He tells of several serendipitous events, which he attributes to his late grandparents’ influence, that aided the work on his production.

Lidia and Koyla, Gell says, did not forget him.