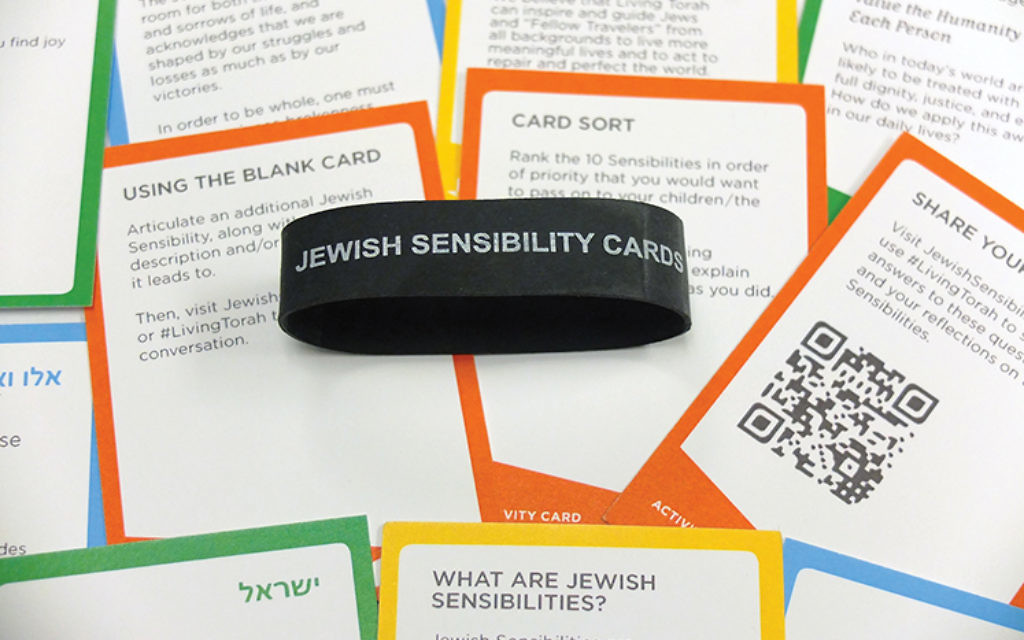 As at any big conference, countless business cards were exchanged at the recent General Assembly of the Jewish Federations of North America as attendees mixed, mingled and did business.

But one participant was packing an entirely different kind of pasteboard. In her handbag, Rabbi Lee Moore of the Lippman Kanfer Foundation for Living Torah carried those practical slivers of paper bearing her contact information, but she also had colorful cards bound in sets of 30, secured with a funky black rubber band bearing the words “Jewish Sensibility.”

The Jewish Sensibility Cards are a project of the foundation, founded in 2013, to grapple with and share Jewish wisdom. They were inspired, Rabbi Moore said, by a 2003 article in the journal Shema that articulated 10 “particularly Jewish ways of thinking about what it means to be human.”

Each card bears a Jewish value, like “elu v’elu” (recognizing the validity of multiple viewpoints), an explanation: both its literal translation, and an interpretation that connects the concept with ordinary, contemporary life.

The foundation’s staff uses such occasions as the GA to seed the Jewish world with these notions.

“Sometimes we get them out in a systematic way,” said Jonathan Woocher, the foundation’s president, referring to a curriculum Hillel International is developing around the cards. “Sometimes less so.” Like Rabbi Moore, Woocher pressed a few packs into receptive hands at the GA.

PresenTense, which provides training for social entrepreneurs, is also using the cards as teaching tools. Rabbi Shira Epstein, the executive director of the 14th Street Y, has been blogging about them, and using them to start meetings, by asking pairs to grab a card and discuss if and how it connects to their lives and work.

And Jodi Bromberg, the CEO of InterfaithFamily, is not only thinking with her staff about how to use the cards with the families and couples they serve at their eight branches, but has made them a part of her personal spiritual practice as well.

Bromberg does a lot of traveling for her work, so she keeps the cards in her bag and uses them to help her reflect on how she’s leading the organization. She likes that they are portable and tactile — in the category of other faith traditions’ prayer beads, or pocket books of sages’ sayings — and wishes there were more Jewish objects like them.

At a time when many Jewish professionals are debating the “Statement on Jewish Vitality” published last month on eJewishPhilanthropy which laments the “declining number of engaged Jews,” Woocher hopes the cards and similar efforts will inspire a different way of looking at the world.

“Ultimately, it’s the content of Jewish teaching and practice that’s important and enables people to find meaning and purpose and satisfaction and joy in their Jewishness,” he said.

The “Shevirah,” or “brokenness” card urges users to embrace imperfection, and it gave Bromberg and her group the courage to try something new when they launched their #JewsLove video with the goal of raising InterfaithFamily’s visibility.

“We’d never done anything like it,” she said. “I guess that was a little bit of Lech Lecha [Go Forth], too.”