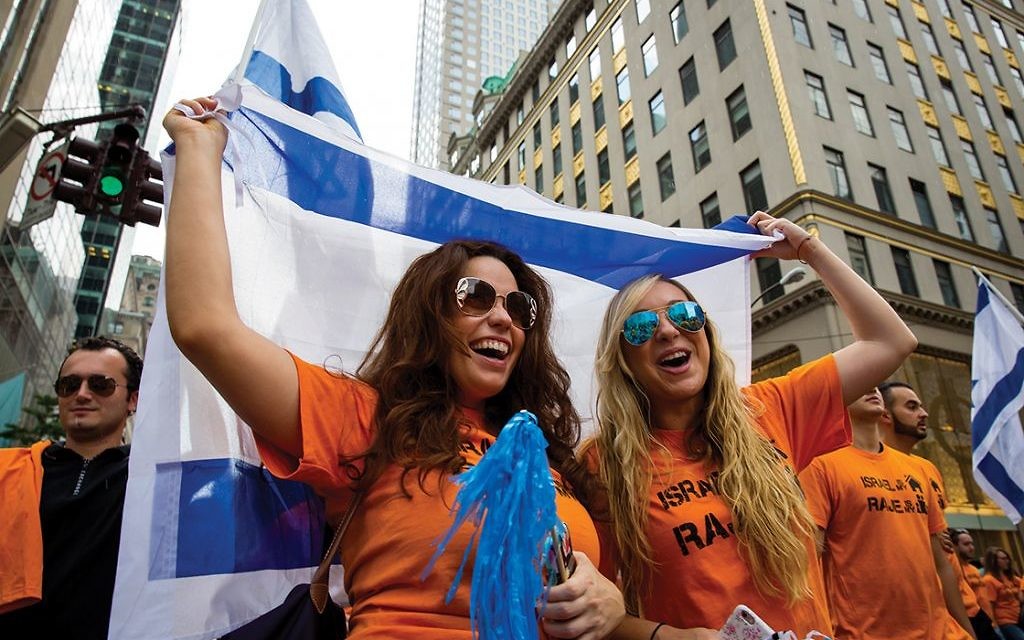 The stormy weather didn’t dampen the spirits of the thousands who turned out last Sunday to march in the 52nd Annual Celebrate Israel Parade.

Sunday’s crowd, which included 30,000 marchers from more than 250 Jewish and pro-Israel organizations, according to a parade representative, was diverse. Participants included Partners for Progressive Israel, a “progressive Zionist organization” that supports a two-state solution and opposes Israeli policy in the West Bank, Boy/Girl Scouts of America and an LGBT contingent.

The marchers included representatives from more than 250 Jewish and pro-Israel organizations, according to a parade spokesperson. Getty Images

Hosted by the Jewish Community Relations Council of New York, the parade featured floats, marching bands and performers, including cast members of the Broadway production of “Fiddler on the Roof.” Amid rain showers, marchers made their way up Fifth Avenue from 52nd Street to 74th Street; plastic ponchos and colorful umbrellas sprinkled the crowd.

“I was looking to march with a group that matched my political views,” said Brandeis student Nathan Alcabes, 24, who marched with the Partners for Progressive Israel group. He held a sign that read “Justice” in both Hebrew and Arabic. “I took the sign that said ‘justice’ because it’s a concept I’m still struggling to define when it comes to Israel — ‘no justice, no peace’ is a phrase I hear increasingly often.”

The parade was also noteworthy for the announcement made by New York Gov. Andrew Cuomo hours before the festivities began, ordering all state agencies to divest from businesses and organizations that support the international Boycott, Divest and Sanctions movement. (See story on page 10.)

A sprinkling of other officials, including New York Mayor Bill de Blasio and New York State Comptroller Tom DiNapoli, joined in the march. Israeli representatives included Consul General Ido Aharoni and several Knesset members. The 102-story Empire State Building was lit up in blue and white for the occasion. The NYPD deployed hundreds of policemen and counter-terrorism personnel to secure the event.

About 30 groups sponsored floats in the parade, including StandWithUs, which supports pro-Israel education on college campuses.

“Walking up 5th Avenue with StandWithUs, joined by students and adults, young and old, you could feel the excitement and support for Israel,” Avi Posnick, StandWithUs New York’s managing director, said in a statement. “Joining in the Celebrate Israel Parade is an amazing experience, an opportunity for Israel to shine and inspire students and communities to support Israel.”

For the first time, the parade also marked International Unity Day, created by UJA-Federation of New York and the Gesher organization in memory of the three Israeli teenagers kidnapped and murdered by Hamas in June 2014. Four parents of the victims joined the crowd marching up Fifth Avenue.

“You better believe our group blasted Barbra Streisand’s ‘Don’t Rain on my Parade’ down Fifth Avenue, and the sopping crowd loved it!” said Mordechai Levovitz, executive director of JQY, a nonprofit organization that supports LGBT Jews, who marched with about 45 others carrying rainbow flags and pink T-shirts emblazoned with Jewish stars. “We were drenched.”