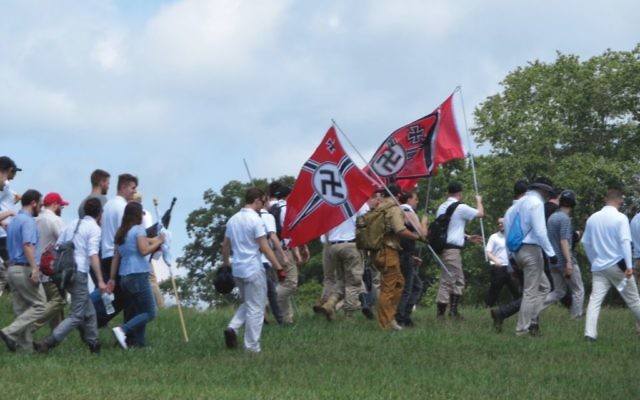 White supremacists rally in Charlottesville, Va. on the weekend of Aug 11-12, 2017. Ron Kampeas/JTA

On April 26, the last day of the Passover holiday, Jews around the world celebrated not only the Israelites’ escape from the power of the Pharaoh but also Pharoah’s capitulation to the power of God. Israel escaped from oppression, but so did Egypt as universal justice prevailed over the arbitrary power of tyrants. We were reminded that the battle between justice and oppression continues when a gunman entered a San Diego synagogue during Passover prayers.

Jews remain the lightning-rod for injustice. A day before the synagogue attack, the New York Times printed a cartoon that Nazis would have applauded: the depiction of a Jewish conspiracy to rule the world’s current superpower. The next day, the New York Times printed an even more insidious cartoon that denigrated Judaism and the Ten Commandments. Politicians and organizations of many stripes will condemn the attack and the cartoons. But do they understand why Jews and the State of Israel are targeted? The Biblical story of the Exodus itself explains the rise of anti-Semitic and anti-Israel attacks.

The Exodus is not a quaint tale of warring nations: It is about the defeat of an ideology common to all human societies. The Bible calls this ideology idolatry and explains — contrary to common misperceptions — that idolatry is not about bowing down to statues and the like. Rather, idolatry is a set of lies about power. Idolatry ascribes greater-than human power or authority to finite things, such as animals, the elements, and most of all to human beings. Through idolatry, human societies across history have deified leaders or themselves and thereby declared themselves above the law. To be a god is to do one’s will without limits: to kill whom one pleases, to enslave whom one wishes, to steal what one wants.

This is the way of all ancient and modern tyrants. Yet such tyrants face a fundamental paradox. All humans including themselves are limited by nature; they are not and never will be as powerful as the gods. Thus from Pharaoh to Stalin, dictators have masked the reality of their common humanity through poetry, pageants, myths, theatre and most of all demonstrations of brutality, all to make believe that they are like gods. Their followers not only believe in this pageantry but by participating in it also get a taste of the god’s power. Thus long after Hitler’s death, neo-Nazis collect memorabilia, parade flags, march in demonstrations and murder Jews. Through this pageantry and crime they nurture their resentment and feeling of power.  We have seen this same patterns in anti-Semitic attacks in Pittsburgh, Paris, Park Slope and parts of Poland.

But the question remains. Why are the Jews targeted by this form of pageantry and crime?  Moreover why during these attacks do the perpetrators accuse their very victims of malevolent power? Here, too, the Exodus provides an answer.

The Exodus is the affirmation that there exists a just and universal power that no self-styled god-king can defeat. All dictatorships without fail have oppressed the Jews, because they they stand for the idea that universal justice places limits on arbitrary human power. Tyrants want to appear to defeat God’s justice, so they set out to defeat his people. Idolaters have viewed the world this way for millennia: if you defeat another people your god must be stronger than theirs. Of course God, as Pharaoh found out, cannot be defeated. The infinite can never be bound by finite creation. Yet idolaters never cease trying.

This fundamental strategy is apparent in another biblical story. The third chapter of the Book of Genesis depicts a snake character who knew he could not defeat God directly. So, instead, he tries to win by defeating God’s people, Adam and Eve. As the Bible recounts the snake is successful in attacking God’s creation, but of course not in eliminating God, only giving the appearance of doing so.

Because of the Jews’ historical identification with the idea of universal justice as described in the Bible, they are always the “canary in the coal mine.” Growing anti-Semitism is a sign of spreading idolatry. The rise in anti-Semitic attacks in the U.S. — on both the right and the left — should give all people of good faith cause for grave concern. We are in an age of dramatic political polarization and demonization. Our side and theirs are no longer people who disagree but people who are all good or all evil, to be followed or eliminated.

All the horrors of humanity have started with idolatry. The Bible came to tell us from its first chapter that we are all brothers and sisters and that we should all serve the One God by treating our fellow humans as our siblings. Idolatry in contrast teaches that each group has its own god, be it Ra, Zeus or its own ideology. Other groups are to be defeated, and even murdered if that means the preferred God/Ideology can rule.   The white supremacist who apparently conducted the attack in San Diego could not imagine the synagogue worshipers as his brothers and sisters, but rather viewed them as creatures to be eliminated. It is right to condemn the attack in San Diego, but it is critical to combat idolatry in America before it takes further hold.

Scott A. Shay is the author of “In Good Faith: Questioning Religion and Atheism” ( Post Hill Press, 2018) and is co-founder and Chairman of Signature Bank of New York.