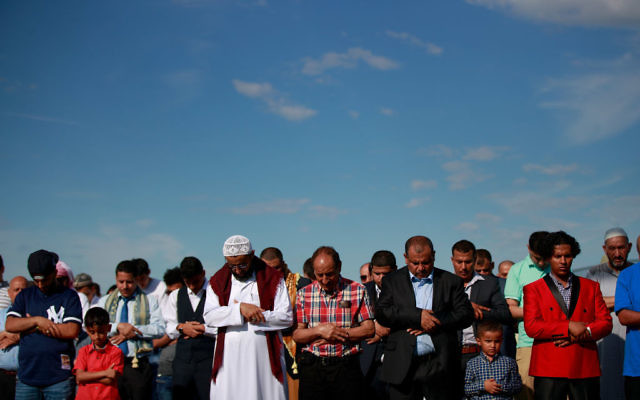 NEW YORK, NY - JUNE 25: Muslims participate in a group prayer service during Eid al-Fitr, which marks the end of the Muslim holy month of Ramadan, in Bensonhurst Park in the Brooklyn borough June 25, 2017 in New York City. Muslims around the world are celebrating Eid al-Fitr, which means 'festival of breaking the fast' to mark the end of Ramadan. (Photo by Drew Angerer/Getty Images)

On Wednesday, the Pew Research Center released a survey of American Muslims focusing not only on numbers and their way of life, but also on how the community has responded to the election of President Donald Trump.

Comparing the two studies shows a Muslim sector in America that is more religious, growing faster and feels more embattled than American Jews. But both groups voted for Hillary Clinton.

Here’s how the Jews and Muslims of the United States stack up.

There are more Jews than Muslims in America, but the Muslim population is growing faster.

Pew found that there are about 3.3 million Muslims in the United States, a little more than 1 percent of the population. U.S. Jews, by contrast, stand at 5.3 million — around 2 percent of all Americans. 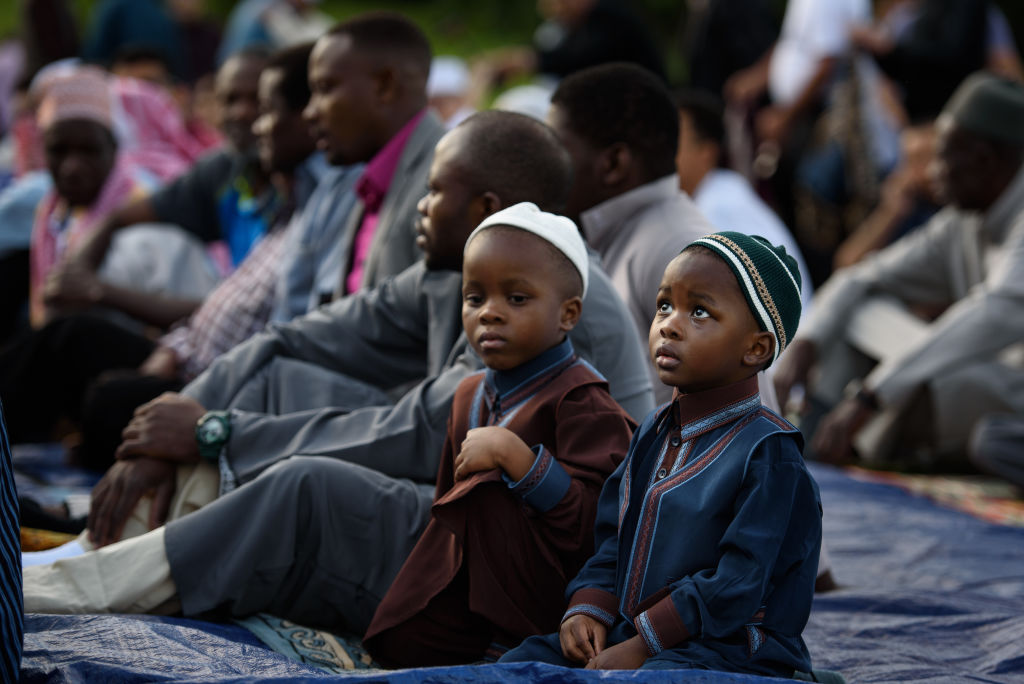 Young boys wait for the beginning of a prayer during an Eid al-Fitr celebration, which marks the end of Ramadan, on June 25, 2017 in Pittsburgh, Pennsylvania. Getty Images

These numbers explain why a 2015 Pew study found that by 2050, American Muslims will outnumber American Jews. While the Jewish population is expected to stagnate at about 5.4 million, Pew predicts that in a little more than three decades, there will be 8 million Muslims in America.

The respective studies also included some data unique to each religion. While there are sharp internal divides between Shia and Sunni Muslims, Pew did not address the question of “who is a Muslim” as it did with Jewish Americans.

The study reported demographic data that may contradict popular American stereotypes of Muslims. Only 14 percent of Muslim immigrants are from the Middle East, while one-fifth are from South Asia. And the plurality of American Muslims — four in 10 — are white.

Only 13 percent of American Muslims are intermarried.

When Pew released its study of the Jews in 2013, American Jewish leaders began fretting about an intermarriage rate of 58 percent since 2000 — and they haven’t stopped. By that measure, American Muslim leaders can rest easy.

Unlike the majority of American Jews, only 13 percent of American Muslims are intermarried. And the number has declined in recent years: In 2011, the number was 16 percent. The numbers are so low that the word “intermarriage” doesn’t even appear in the survey.

But another statistic shows that American Muslims may be following their Jewish neighbors. Among Muslims born in the U.S., the intermarriage rate is nearly 20 percent.

Another reason for the difference in intermarriage rates could be the discrimination that Jews and Muslims each face in America. Jews, who are more likely to marry outside their group, are also more accepted in America than Muslims.

In an age when Trump the candidate called for a ban on Muslim immigration, the Muslim study focused heavily on Muslim feelings of discrimination and belonging in America. Questions were asked about Islamophobia, anti-Muslim violence, the president, terrorism, extremism and how Muslims feel about being Muslim and American.

In brief, the study found that nearly half of Muslims have faced discrimination in the past year, and 75 percent feel Muslims face a great deal discrimination in America. But nine in 10 feel proud to be American. Three-quarters of American Muslims say violence against civilians can never be justified, as opposed to 59 percent of Americans in general. 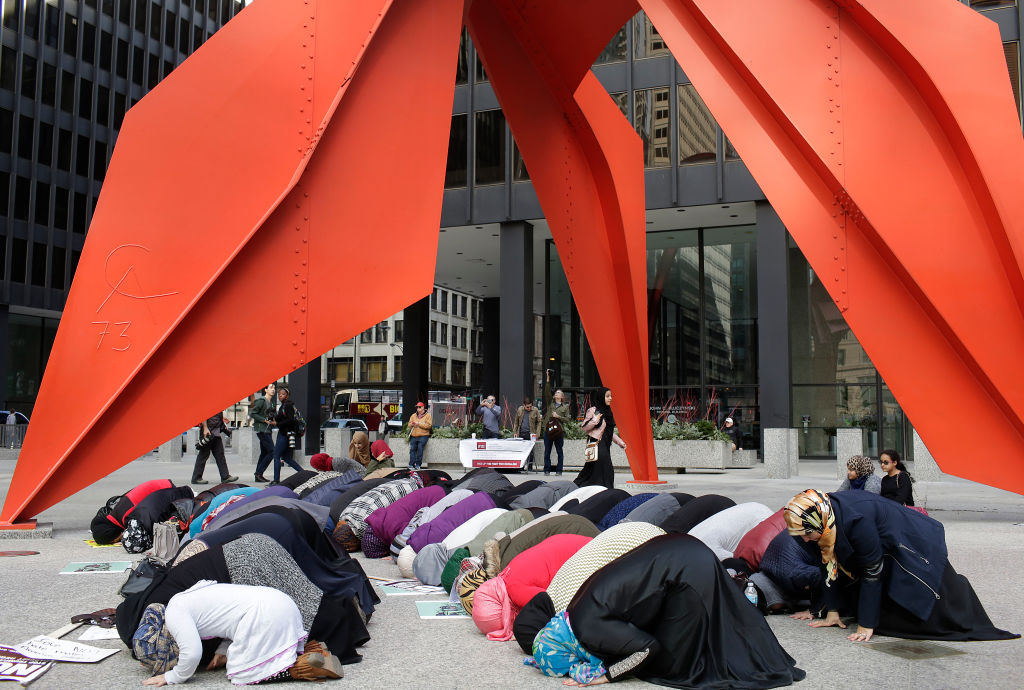 Muslim women pray as they pause from protesting against US President Donald Trump on February 19, 2017, in Chicago, Illinois. Getty Images

But Pew’s Jewish study was published three years before the spike in anti-Semitism that accompanied the 2016 election. A poll by the Anti-Defamation League published in April revealed starkly different numbers, showing that most Americans were concerned about violence against Jews.

Muslims are far more religious than Jews, but both say social justice is central.

American Jews and Muslims are particularly different when it comes to religion. While nearly two-thirds of American Muslims say religion is very important to them, only a quarter of Jews do. A third of Jews believe in God, compared to 85 percent of Muslims who said belief in God is essential to being a Muslim. Nearly six in 10 American Muslims say following the Quran is essential to being a Muslim, compared to less than a quarter of American Jews who say the same about Jewish law. 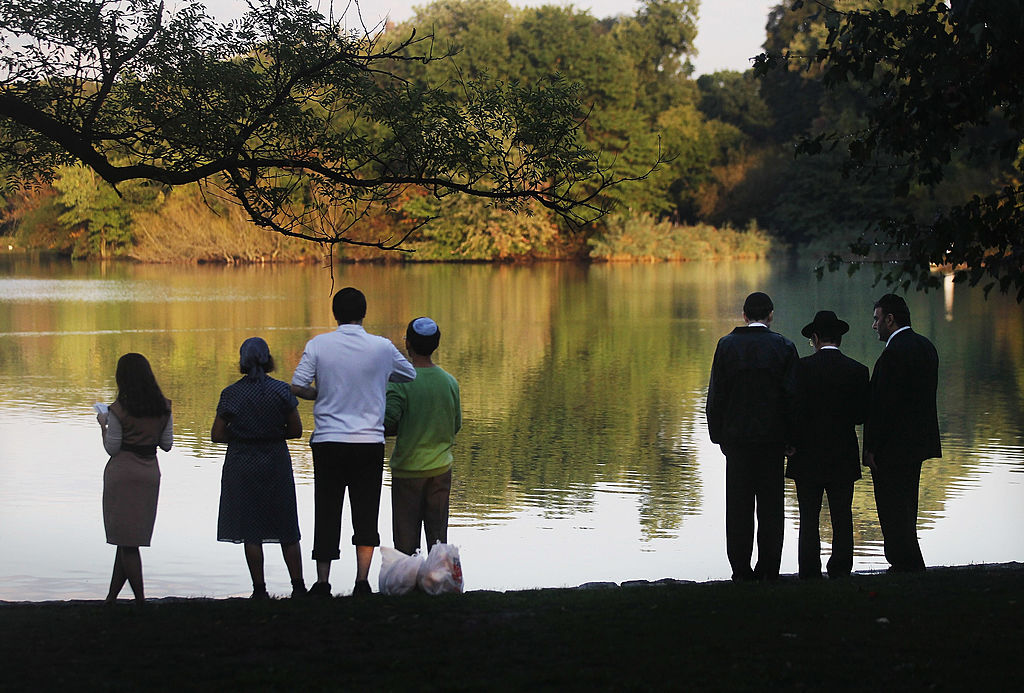 Jews pray while marking Rosh Hashanah in Prospect Park during a traditional Tashlich ceremony on September 29, 2011 in the Brooklyn borough of New York City. Getty Images

Four in 10 American Muslims attend mosque at least once a week and eight in 10 observe the monthlong fast of Ramadan. By contrast, two-thirds of American Jews attend synagogue less than once a month and only about half fasted on Yom Kippur.

But there are some commonalities, too. Nearly all American Jews and Muslims say they are proud to be Jewish and Muslim, respectively. And both groups prioritize social justice. Solid majorities of Jews (60 percent) and Muslims (69 percent) see “working for justice and equality” as an essential part of their religious identity.

Jews are more liberal than Muslims, but a higher percentage voted for Trump.

American Muslims responded to Trump’s anti-Muslim rhetoric on the campaign trail by voting for Clinton. Nearly 80 percent of American Muslims voted for the Democrat, while only 8 percent backed Trump. By contrast, Clinton earned 70 percent of the Jewish vote, with Trump garnering 25 percent.

But Muslims are trending liberal on at least one issue: A majority believe homosexuality should be accepted in society, compared to just 27 percent who felt that way a decade ago. Four-fifths of American Jews agree.