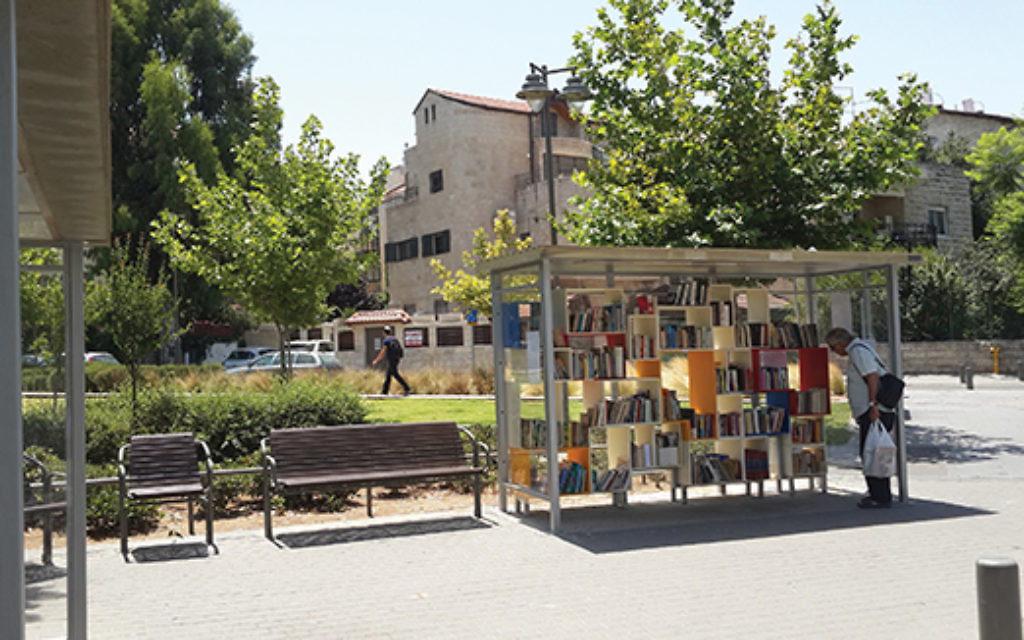 According to a Talmudic saying, breathing the air of the Land of Israel makes one wise. If that doesn’t suffice, Jerusalem pedestrians are being offered the opportunity to absorb the books of their choice as they stroll along the city’s popular four-mile promenade, Jerusalem Train Track Park, aka Park HaMesila.

This summer, the city inaugurated a plan to open a string of open-air libraries, constructed from repurposed bus shelters.

The first set of new libraries are located along Jerusalem’s promenade, which traces the tracks of the 19th-century Turkish railroad along the southern edge of the city. Additional libraries are planned for other locales. The libraries were created by the Jerusalem Municipality along with local residents and students at the nearby Bezalel School of Art.

“We initiated this project in hopes of encouraging literacy in the public sphere as a recreational activity in the lovely Train Track Park and to provide residents who do not frequent libraries with another option for borrowing and reading books,” Jerusalem Mayor Nir Barkat noted in a statement.

The libraries are set up to operate “in a ‘give and take’ format … with the goal that the project will run itself in the future,” the statement read. It added that the open-air libraries allow residents to escape the constraints of traditional institutions.

“The public will be able to read for free, in a comfortable and relaxing atmosphere in the various enchanting corners of the park, to swap and donate books at any time in the day and without the need for supervision, library cards or fines for overdue returns,” it said. “In addition, from time to time the library complex will house community activities related to literature and poetry for all ages and for a variety of populations.”

Students in Bezalel’s social activism department designed the mini-libraries, giving the old-fashioned bus stops new life and purpose by adding bright bookshelves with a retro spirit and a flash of primary colors.

Since the first “branch” opened, steps away from the Emek Refaim shopping district, it appears that residents enjoy being both lenders and borrowers. Locals fill the shelves with all categories of books, which seem to be replenished often. Hebrew titles predominate, though English, French, Spanish and Russian titles are not lacking. There are hardcovers and paperbacks for children and adults as well as multi-volume encyclopedias and even sacred tomes.

Hanni Mittelmann, a recently retired Hebrew University professor of German literature who lives nearby, delights in watching the daily parade of people of all ages and walks of life read and share books.

“It is a pleasure to have a view of such a civilized sight from my doorstep,” she told The Jewish Week. “The other day, I enjoyed watching a father and his young sons stop their bicycles, and the children were so pleased that there were books for them, too. We even noticed that there is night lighting so readers are accommodated at any hour.”

Sing-alongs and readings have been held at the site in the early evening hours, announced by handwritten notices on the sides of the shelves. A second open library has now popped up about a mile west.

As the park and the libraries wend through its seven diverse neighborhoods, it is less likely that any community on its old railroad path will be viewed as being on the wrong side of the tracks.