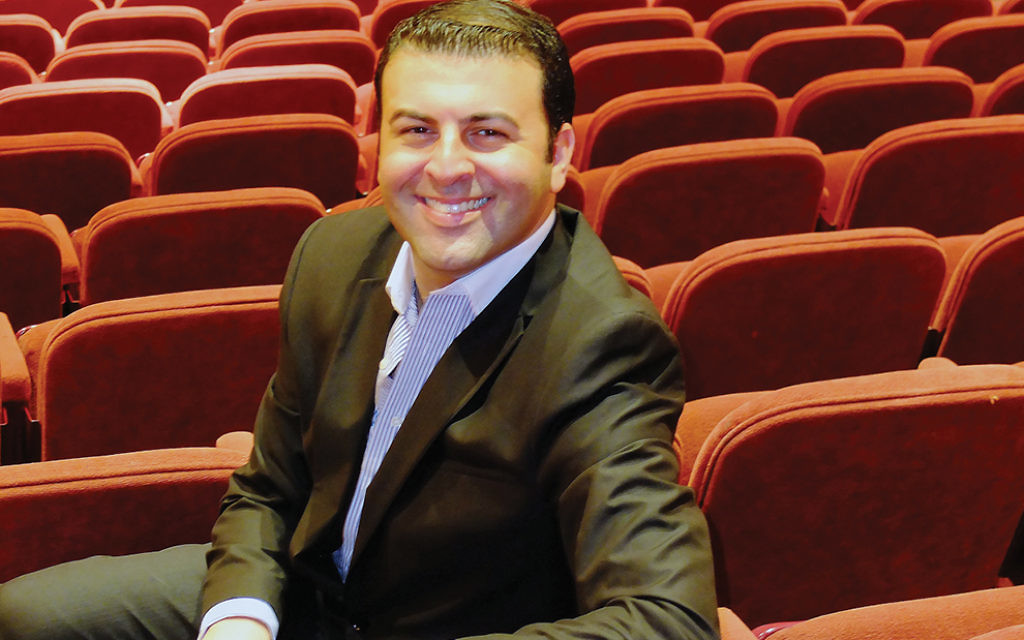 When David Serero’s great-grandfather, who was the chief rabbi of Fez, would stroll through the streets of the then-capital of Morocco, both Jews and Arabs would rise to their feet in his honor, according to Serero family lore. A century later, Serero, an acclaimed opera singer, is in the midst of exploring his family heritage by imparting an unusual Sephardic spin to productions of three classic works, “The Merchant of Venice,” “Nabucco” and “Othello,” all of which deal with relations among members of different religions. Produced by the American Sephardi Federation (ASF) at the Center for Jewish History in Chelsea, the productions incorporate Ladino songs and Sephardic Jewish costumes.

Serero’s Moroccan father and Persian mother met in Israel and then moved to France, where Serero grew up in the 1980s. In Paris, where the majority of the Jewish community is (and still is) Sephardic, Serero developed a love of music. His father, who was a kosher caterer, would take his son along in the car as he made his deliveries, and the two listened to cassettes of Sephardic singers like Rabbi Haim Louk, whom his parents imported from New York to sing at Serero’s bar mitzvah. (Serero, who was deaf for most of his childhood because of an undiagnosed ear infection, had his full hearing restored by the age of 11.)

There was amity among Jews and Muslims of Paris, Serero, 34, told The Jewish Week. “Jews and Arabs ate in the same restaurants and went to each other’s weddings,” he said, recalling that he and his friends were blissfully ignorant of religious hatred. “We didn’t know that Arabs were sending bombs on Jews,” a reference to terror attacks in Paris in the 1980s. In school, Arabs and Jews ate together at what they called the “no-pork table.” As a result, Serero said, “I always felt close to Arabs when I was a kid.” Later, though, Serero saw the rising tide of prejudice and violence against Jews, and he decided to move away from France.

With proficiency playing jazz piano gained from attending music schools in Paris, Serero left for New York in 2001 to study acting. After seeing “Turandot” at the Metropolitan Opera, he was bitten by the opera bug and moved to St. Petersburg to develop his singing voice. The baritone launched his operatic career a few years later and has since performed all over the world, including a concert at Hadassah Hospital in Jerusalem for Israeli and Palestinian children, two performances for former Israeli President Shimon Peres, and an operatic version of S. Anski’s “The Dybbuk” at the Kfar Blum Chamber Music Festival in the Upper Galilee. His Broadway debut came in 2013 with a holiday concert at the Snapple Theater Center.

But Serero’s interest in his Sephardic roots never waned. He decided to incorporate Ladino music into a production of “Merchant” in order to confer what he called a “noble” touch on a character that historically has been viewed as a bloodthirsty comic villain. (He also gave the play a modern sensibility by cutting close to half its length, changing archaic words to contemporary ones, and bringing in a Jerry Springer character to “report” on Portia and Bassanio’s argument toward the end of the play.)

The Sephardic tone was set from the outset; Shylock, played by Serero, opened the play by singing “Shalom Aleichem” (Peace Be Upon You) in a Ladino style, a song that was interrupted by Antonio’s spitting on him; he sang it again at the end, after his character’s forced conversion to Christianity. Serero recorded some of the songs used in the production and they appear on his most recent album, “Sephardi,” which was released last December.

As critic Deirdre Donovan wrote in a Curtain Up review of “Merchant,” which was revived in January after a brief run last summer, Serero’s version “breathes with Jewish authenticity and poetic fervor … the sacred Ladino songs inform as well as soften this Shylock.”

Verdi’s “Nabucco,” is, Serero said, a natural choice for Sephardic treatment, since it centers on the capture of the Hebrews by the Babylonian king, Nebuchadnezzar II; its most famous song is the chorus of the Hebrew slaves, “Va, pensiero, sull’ alli dorate” (Fly, thought, on wings of gold). The production, which is set to open in April, will feature singers from the Metropolitan Opera, the Paris Opera and La Scala.

Serero admits that “Othello” (which will open in June) has nothing to do with Jews, but he emphasizes the fact that the play’s title character, who is a Moor, hails from Mauritania (present-day Morocco). For “Othello,” he plans to use a Moroccan Jewish instrument called a darbuk. “Every time Othello’s blood starts to boil, the darbuk will make its snake-like sound.”

Jason Guberman-Pfeffer, who directs the American Sephardi Federation, told The Jewish Week that last summer’s inaugural run of “Merchant” was timed to coincide with “Sephardic Journeys,” an exhibit at the Center for Jewish History, co-sponsored with the ASF. In addition to a menorah and Torah finials that had belonged to Serero’s great-grandfather, the exhibit contained a 1587 Hebrew-Latin-Italian dictionary compiled by a Venetian physician and dedicated to the pope, a 1752 anti-Semitic tract by Paolo Medici (penned after he converted to Christianity) and a 1922 Ladino translation of “Romeo and Juliet.” After each of the performances, Guberman-Pfeffer took the stage to highlight a rare item from the ASF’s collection.

“People tend to think of Sephardic culture only in terms of music and food,” he lamented. “They don’t appreciate the scholarship, history, philosophy, commerce and spread of ideas.” By bringing people into the center to see the theatrical productions, he said, the ASF is able to “expose people to our vast resources” and broaden their awareness of Sephardic culture.

While the American Jewish population is still overwhelmingly Ashkenazic, Guberman-Pfeffer (who is himself of Ashkenazic descent) conceded, he views Sephardic culture as “a part of the shared heritage of American Jews, which more and more people want to connect with.” Then again, as genetic testing becomes more widely available, he pointed out, many Jews who believed that they were purely Ashkenazic have been surprised to discover that they have Sephardic ancestors.

And because Sephardic Jews are permitted to eat a wider variety of foods on Passover than their Ashkenazic co-religionists, Guberman-Pfeffer joked that “everyone wants to be Sephardic on Passover.”