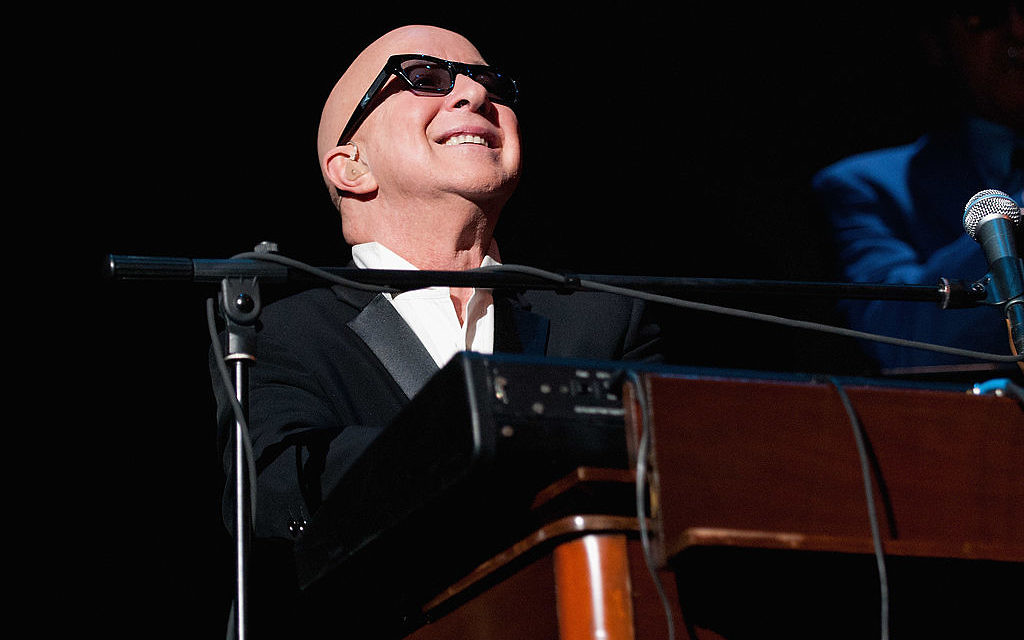 Paul Shaffer performs during the official Blues Brothers Revue at the Rialto Theater on March 5, 2012 in Joliet, Illinois. Getty Images

NEW YORK (JTA) — Paul Shaffer, sporting a gray T-shirt and a one- or two-day-old beard, is sitting in the living room of his spacious Manhattan apartment near Lincoln Center. The walls are crammed with music memorabilia, including a signed Curtis Mayfield single and a plaque presented by the State of Israel to Sammy Davis Jr.

The homey scene is a far cry from the glamorous studio environs that made Shaffer famous.

For more than 30 years, Shaffer served as David Letterman’s sidekick, musical director and band leader on his two late-night television shows. Since Letterman’s first show aired on NBC in 1982, Shaffer has been known for his sparkling suits and quirky sunglasses, and for backing some of the biggest musicians in the world, including Miles Davis, Carole King and Steve Winwood.

But now, on a steamy late spring evening, Shaffer has an audience of one as he sits down at an old Hammond organ near a window. The instrument once belonged to the late James Brown, Shaffer said, and he picked it up years ago at an auction.

Shaffer turns on the large multi-tiered organ, lets it warm up and starts playing a walking bass line on the bass pedals.

“I used to stay away from [the bass pedals], I was too afraid of them,” he said with a smile. “Now I’m getting to the point where I really want to play them all the time.”

Time is something Shaffer, 67, has had since Letterman retired in 2015.

“I thought, let’s take a break and enjoy a few things other than show business,” he told JTA. “I guess I don’t have the depth for that because I just got bored right away — and depressed.” 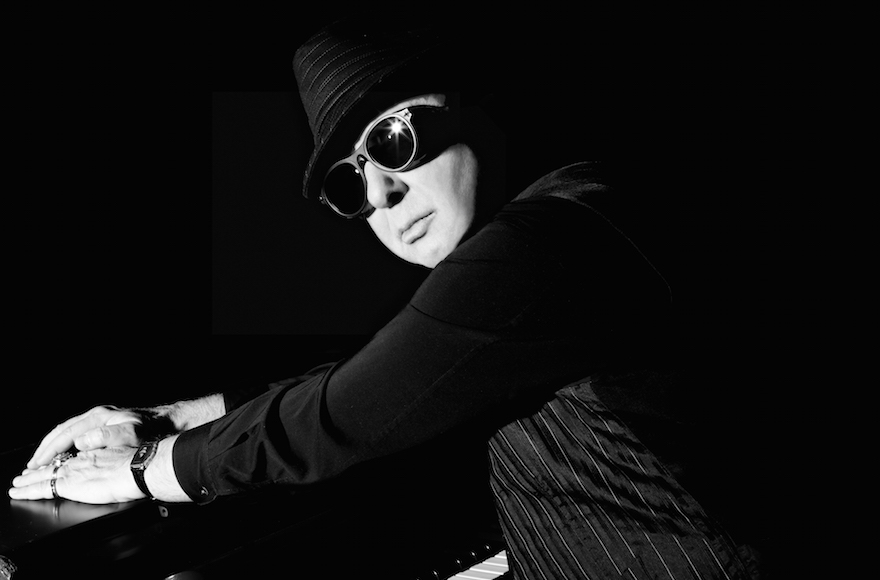 So Shaffer soon found himself in a recording studio with his “Late Show” band. An album, “Paul Shaffer and The World’s Most Dangerous Band,” was released in March, and features an array of guest vocalists, including Bill Murray (yes, that Bill Murray).

Shaffer is currently in the middle of a short tour — something he hasn’t done since 1980, when he played with the Blues Brothers band led by Dan Aykroyd and the late John Belushi, whose songs he helped arrange.

He has just returned from a gig at the Ryman Auditorium in Nashville (“the church of country music,” as he calls it), and he will play some dates across the Midwest and in Beverly Hills later this month.

The new record, which consists mostly of covers of R&B classics, is something of a return to his roots. A nice Jewish boy from Thunder Bay, Ontario, Shaffer recalled how his father — a lawyer he describes as “conservative” but “hip” — played Sam Cooke and Ray Charles around the house. 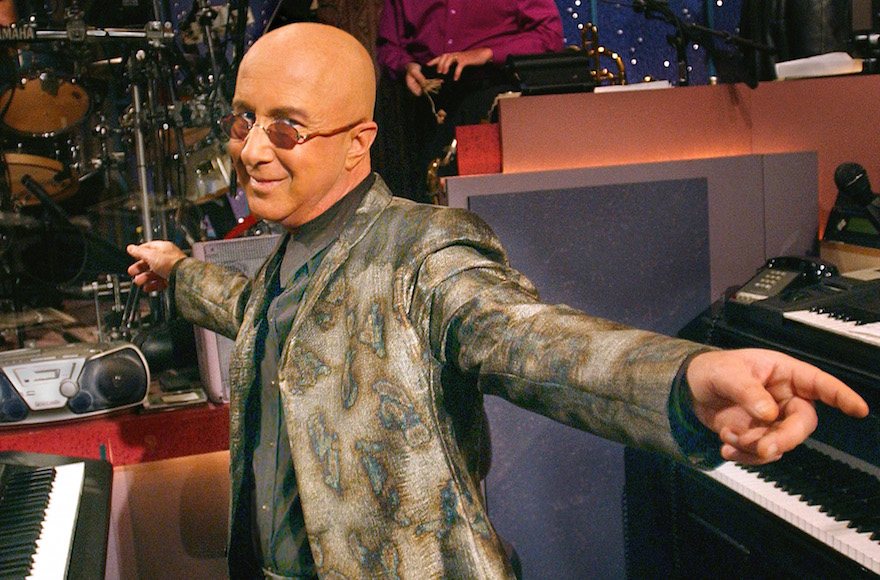 Paul Shaffer on the set of the “Late Show with David Letterman” in 2001. (John Paul Filo/CBS via Getty Images)

The Shaffers were among some 40 Jewish families in a Lake Superior town, and the only synagogue was Orthodox. So Shaffer had an Orthodox bar mitzvah and learned to love Orthodox services, which he says he still attends from time to time at a synagogue in Manhattan. He brought up his daughter and son Jewish in the New York City suburbs of Westchester County; his son also had an Orthodox bar mitzvah.

Far from having the stereotypical dreams of “my son, the doctor,” Shaffer said his parents “secretly” wanted him to succeed in music.

“There was the Jewish attitude of, ‘That kid is going to play the piano if I have to break every one of his fingers,’” he recalled. “I was going to be musical, I had that kind of Jewish mother.”

Shaffer didn’t hide his Jewish identity as he rose through the ranks of show business. His career began in earnest in 1972 when he was the musical director of the Toronto production of the hit rock musical “Godspell” — its impressive cast included Victor Garber, Gilda Radner, Eugene Levy and Martin Short.

Shaffer then played in the original “Saturday Night Live” band before becoming the music director on the Letterman shows —“Late Night” on NBC and then “The Late Show” on CBS. A New York magazine article from 1986 described him as a “musician, comic, celebrity, fan, workaholic, hipster and ethical Jew” who seems “equally comfortable at a rock concert or a cocktail lounge, at a comedy club or a seder.”

Shaffer, in what New York magazine called one of the city’s “most bizarre rituals,” hosted what became known as the “Paul Shaffer Celebrity Seder” for the cast and crew of “Saturday Night Live” during the show’s early years. One year, Shaffer recalled, Murray showed up with his mother and brother. Another year Eddie Fisher, there with his daughter Carrie and her eventual husband, Paul Simon, sang “My Yiddishe Mama.”

“I have to confess I broke halachic rules and accompanied [Fisher] on the piano,” Shaffer said.

Shaffer said he and Letterman remain in touch. In fact, the comedian showed up at a Chabad fundraiser dinner a few months ago to present Shaffer with an award.

These days, Letterman sports a long, bushy Hasidic-style beard — and it didn’t go unnoticed by the guests.

“His opening sentence was, ‘I can’t tell you, ladies and gentlemen, how many people have approached me tonight and said, rabbi what time is sundown?’” Shaffer recalled. “At the end they presented him with a black hat.”

What’s next for Shaffer after the tour?

He’s not sure yet, but at least one thing is clear: His organ practice will continue.

With his hands moving swiftly around the keys and his feet hitting the bass pedals, Shaffer sounds like an eager piano student all over again.