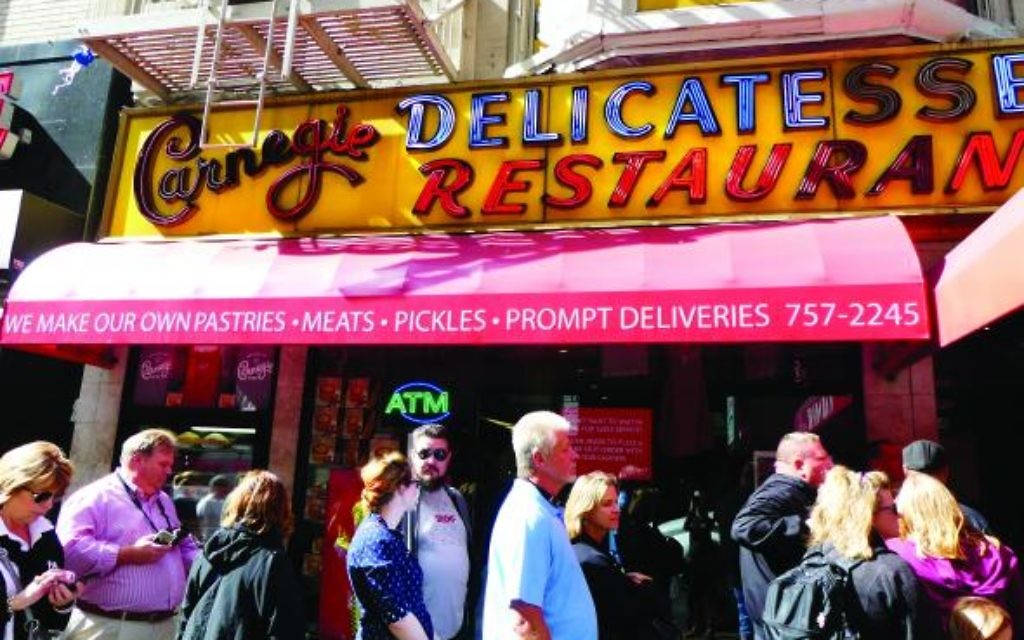 It may not be a particularly Jewish hangout any more, but the Carnegie Deli is that rare breed — a kosher-style restaurant that became one of the most famous restaurants in the world, a place to which tourists make a beeline as soon as they land at the airport, as if no visit to New York is complete without eating there.

Little wonder that while other iconic Midtown delis like Reuben’s, Lindy’s and the Stage (Carnegie’s longtime rival) traditionally put caricatures of celebrities on their menu covers, the Carnegie instead used pen-and-ink drawings of New York landmarks like Central Park and the Coliseum. How ironic that no images of famous skyscrapers appeared on their menus, given that the Carnegie would become known for its towering sandwiches that summed up the romance with excess that has long characterized the life of Gotham.

The Carnegie, whose owner announced last week that the last corned beef on rye would be served on the last day of 2016, opened in 1937. It was the height of the Great Depression, when a generation of secular Jews needed alternatives to the synagogue as places of gathering and mutual support. A 40-seat mom-and-pop restaurant owned by Izzie and Ida Orgel, the deli was sold in 1942 to Max Hudes and two partners, who ran it for decades, but failed to achieve the profile of the Stage Deli, owned by the more colorful Max Asnas. Only in the 1970s, when the Carnegie was bought by Milton Parker and Leo Steiner, did the Carnegie begin to achieve renown, especially when Steiner became known as a TV pitchman for Jewish foods; in one famous spot, he sold a sandwich made of Levy’s Real Jewish Rye from behind the counter at the Carnegie.

Always on the lookout for publicity, Steiner helped the nation to celebrate its bicentennial by constructing a 60-pound replica of the Statue of Liberty out of chopped liver, with an immense turkey wing standing in for her torch. He took a page from the Stage’s book by making the deli a hangout for stars, naming sandwiches after the theater, film and TV luminaries of the day, and plastering the walls with celebrity photographs. And he trained the waiters to keep the customers laughing. Waiter Jack Sirota, who worked at the Carnegie for four decades, became a bit of an entertainer himself, regaling the patrons with stories and joking to a doctor that fixed a blocked artery, “I’ll bet you took out the pastrami!”

When Steiner died of a brain tumor in 1988 at the age of 48, Parker took over the day-to-day management of the restaurant, and also developed innovative ways, at the turn of the millennium, of publicizing it. Parker, who died in 2009 at the age of 90, appeared in a wacky promotional video, “What a Pickle: The World’s Greatest Deli Musical,” that played on a loop at the restaurant to divert those who were waiting in line. The video starred Parker, shlepping around an immense pickle. It then switched to a black-and-white silent movie format with intertitles and background music, in which one of the deli waiters was shown walking home after work and slipping on a pickle on the sidewalk, where he was helped up by a leggy non-Jewish woman. He then romanced her by taking her for a picnic in Central Park with sandwiches from the Carnegie Deli, in a Barry White (here called Barry Whitefish) parody. The video then showed the customers and waiters, few of whom looked Jewish, singing and dancing at the Carnegie, with a big band theme of everyone “swinging” at the “Deli King.” The waiter concluded by clumsily juggling the food in a rapid-paced patter song.

As is seen in the video, the Carnegie, despite its overt theatricality, stands for the evaporation of Yiddishkeit rather than its reconstitution. I once went around to all the tables and asked the diners, who turned out to be from all over the world, what they thought they were eating. Not one said that he or she was eating Jewish food — they simply said that they were “eating at a deli.”

In his wonderful book, “Through the Children’s Gate: A Home in New York” (Alfred A. Knopf, 2006), New Yorker essayist Adam Gopnik has traced what he calls the “drying up” of Jewish comedy in New York to the period between the release of Woody Allen’s “Annie Hall” and that of “Broadway Danny Rose” (both of which films include scenes in the Carnegie). In the latter film, he points out, the “black-and-white world of the comics shpritzing at the Carnegie Deli is frankly presented as a Chagall world, a folk-tale setting, the whole thing vanished.”

Gopnik connects this to the fading of New York ethnic life in general, from the Asian countermen slicing fish at Zabar’s — the iconic gourmet Jewish food shop — on the Upper West Side, to the lack of overt Jewish references on “Seinfeld,” where the “Jewish situations are mimed by rote, while the real energy of the jokes lies in the observation of secular middle-class manners.” The traces of Jewishness remain, but their energy is largely dissipated.

In addition, the Carnegie has had its share of well-publicized troubles lately. Its current owner, Parker’s daughter, Marian Harper Levine, split from her husband, Sandy Levine (the former manager of the restaurant, whose business cards proclaimed that he had an MBD — “Married the Boss’s Daughter”)— after she found out that he was having an affair with a restaurant hostess whom he had set up in an apartment above the restaurant. But even as she was filing a $10 million lawsuit against her ex-husband, she quickly got caught up in another scandal, when it was discovered that $2.65 million had been wrongly withheld in wages from dozens of the deli’s employees. (A judge at their divorce hearing told the estranged couple that they had “made millions of dollars on the backs of dishwashers, cleaners and pastrami slicers.”) And then, in what looked like the final blow, the restaurant closed for 10 months last year after it was found to have illegally siphoned $40,000 worth of gas before it reached the meter.

But, to the surprise and relief of many, the Carnegie reopened in February of this year, and it looked as if it had put its woes in the past. The abrupt announcement last Friday morning that the deli would close for good on Dec. 31 jolted many Jewish New Yorkers, for whom the Carnegie remains a nostalgic throwback to the days when pastrami and corned beef still fueled much of the economic, political and cultural life of the city.

Indeed, the Carnegie has remained emblematic of the city as a whole. When New York was vying against London, Paris, Madrid and Moscow to host the 2012 Summer Olympics, the city’s boosters ran an ad that compared the weight of a sandwich from the Carnegie to that of an Olympic gold medal, pointing out that both tipped the scales at a pound and a quarter.

Food writer Josh Ozersky put it best in his “Meat Me in Manhattan—A Carnivore’s Guide to New York” (Gamble Guides, 2003). The Carnegie Deli, he wrote, “doesn’t look like it should be a definitive New York food institution. It’s flashy and self-promotional, a magnet for free-spending tourists who don’t know bupkis, and its über-Jewish authority would seem to be belied by the fact that nearly everyone working there is Hispanic. It’s also astronomically expensive.” But the food, he said, is the “federal reserve of deli food. You can take it to the bank.”

If only you could.

Ted Merwin writes about culture for the paper. He is the author of “Pastrami on Rye: An Overstuffed History of the Jewish Deli,” which won a 2015 National Jewish Book Award.