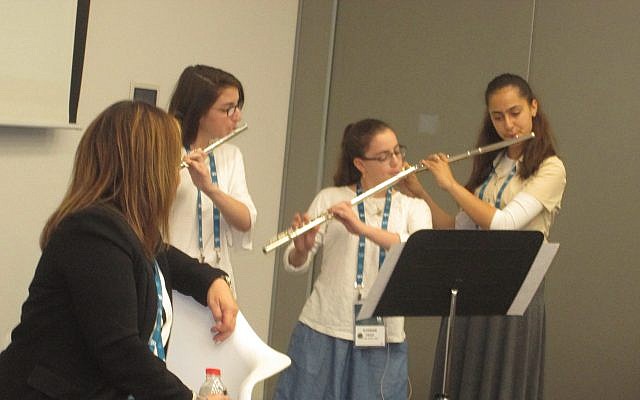 Students from the Arad Music Conservatory performed at a session on federation fundraising at the General Assembly. Arad is the sister city of the Jewish federation of Delaware and the conservatory benefits from that partnership. Photos by Michele Chabin/JW

Tel Aviv — During the most recent General Assembly (GA) of the Jewish Federations of North American, held here last month, dozens of conference participants were treated to a beautiful short performance by three girls studying at the Arad Musical Conservatory.

The flute recital, which took place during a session on “inspired fundraising,” was meant to demonstrate the impact that charitable giving through what is called a “partnership portal” has on federations and their Israeli “sister cities.”

The conservatory receives significant funding in the form of scholarships from the Jewish Federation of Delaware in Wilmington, Arad’s sister city, through Partnership2Gether (P2G), which connects Jewish and Israeli communities in 46 city-to-city and region-to-region partnerships; the partnerships emphasize face-to-face meetings between people from the twinned areas.

Federation officials say programs like P2G can stimulate charitable giving because donors can see with their own eyes where their donations are going.

“We bring people to the region, show them the specifics of what we’re doing,” Steve Nasatir, the longtime head of Chicago’s Jewish Federation, the Jewish United Fund (JUF), told the audience, which was comprised of federation and Jewish Agency officials, Israel-based grant recipients and Israeli organizations eager to learn how to get on the federations’ radar.

Suzanne Grant, the Delaware federation’s national campaign chairwoman, said that prior to partnering with Arad “we didn’t know much about the city. We went to Arad, met with the people and built relationships, which have grown. When people from Delaware visit Israel” on missions, birthright and other programs, “they go to Arad.” 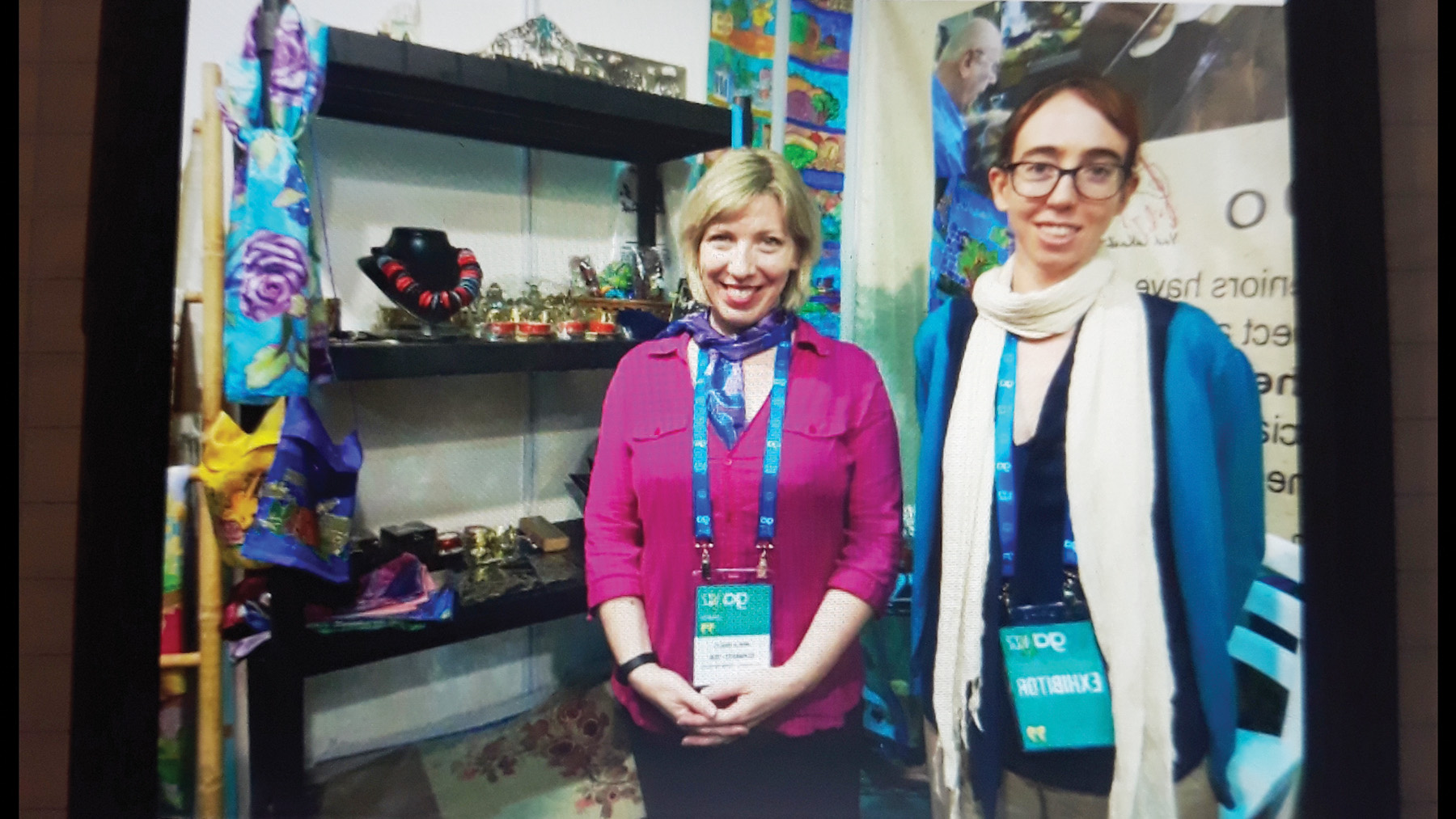 Tamar Lafontain, left, and Ariela Schwartz-Zur from the organization Yad Lakashish/Lifeline for the Old, say the financial assistance Northern American Jews and the federations give to their organization is vital to its survival.

Arad residents, in turn, make it a point of visiting federation people in Delaware when they’re in the U.S., thanks to the connections they have forged with members of the Jewish community there.

From the audience, a representative of the Jewish Federation of Greater MetroWest NJ noted that her community is also raising funds for Arad and the conservatory, and that fundraising for a specific purpose can boost donations.

“We asked our Lions to increase their gifts by $500, and we managed to raise $50,000,” she said of her federation’s Lions of Judah — female philanthropists who donate at least $5,000 per year. “We’re trying to build a new base for the Lions. Hopefully the additional $500 will become the basis for next year’s giving.”

Nasatir said his federation has funded $35 million for programs in the Kiryat Gat region during their 22-year partnership. Furthermore, “every Chicago mission, from our eighth-grade program to birthright, visits the region,” he said.

Bardit Levy, principal of the Sprinzak School in Kiryat Gat, said JUF’s support has allowed her to provide structured emotional support to her students.

“Some come from difficult homes,” she said, “and when they come to school they need to learn, but their minds are in a different place. We try to determine what to give to each child and how to give them the tools to be independent citizens in the future.”

Although the Ministry of Education provides many resources, emotional support is not one of them, she added, also pointing out that the partnership with Chicago provides other benefits.

“Israeli children know little about Jewish children abroad, but Taglit [Birthright] groups visit us three or four times a year, and so do other organizations with ties to the federation.

Nasatir said the partnership has also had a big impact on Chicagoans.

“The friendships we’ve developed also helped develop trust between us.” When, recently, members of the federation felt hurt by Israel’s lack of religious pluralism, he said, “we were able to share our feelings” with the Israelis. “I think our relationship runs really deep.”

Israeli not-for-profits that receive federation funding through the partnership and other initiatives consider it a godsend.

“We receive no money from the government,” said Ariela Schwartz-Zur, executive director of Yad Lakashish/Lifeline for the Old, which provides stipends, subsidized dental care and hot meals to 300 needy elderly men and women.

The organization had a booth at the GA displaying brightly colored scarves and other handmade items crafted by Yad Lakashish’s aged craftspeople.

“Twenty-five percent of our budget is based on sales of the items created by the elderly and 75 percent on donations. The majority of our support is from American Jews,” Schwartz-Zur noted.

Tamar Lafontain, the organization’s public relations professional, said many people visit the workplace on federation and other types of missions.

“Some missions visit us because they want to see the impact their dollars are having. Others visit, tour our facility and get so excited then decide to support us.”

Either way, Lafontain said, when donors and potential donors see the center’s important work with their own eyes, they become especially motivated to support it.

As GA participants milled around the exhibition hall, Dennis Allon, director of research development for the Israel Guide Dog Center, expressed the hope that federation people would notice his organization, which provides dogs to the sight-impaired, people with PTSD and children with disabilities like severe autism.

“If you’re not in a specific partnership region — we’re a national organization, it’s hard to get them aware that we exist. Most small nonprofits face this problem.”

Allon said his organization could not afford the $4,000 price tag for a GA booth.

“It becomes a question of where you put your resources.” He said a little help from the federation “would go a long way.” ◗