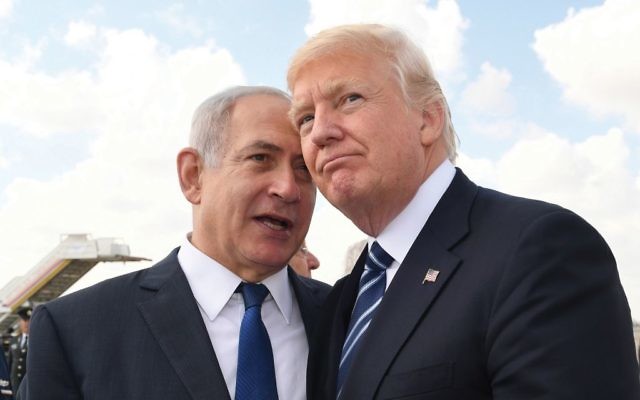 On the list of President Donald Trump’s alleged misdeeds, the fact that he skipped a visit to the Warsaw Ghetto Memorial during his trip to Poland this month seems pretty insignificant. Yet it was enough to serve as the news hook for a New York Times column that revived the charge that Trump was a serial insulter of Jews if not necessarily, as author Frank Bruni disingenuously noted with a weasel-worded disclaimer, “much of an anti-Semite.”

But the real problem with the column wasn’t so much the weak arguments it put forward as it was a reflection of a desire on the part of liberals to view the world as a place where one can view the right as incorrigibly anti-Semitic while assuming that Trump’s opponents are natural allies of the Jews. At a time when anti-Semitism is becoming a serious problem on the left here and abroad, obsessing over minor Trump kerfuffles while largely ignoring genuine threats to the Jews illustrates the way hyper-partisanship can undermine the fight against hate.

“Obsessing over minor Trump kerfuffles while largely ignoring genuine threats to the Jews illustrates the way hyper-partisanship can undermine the fight against hate.”

Bruni’s indictment of Trump as a foe of the Jews is a list of various statements or actions that may illustrate the president’s well-known lack of tact as well as the poor staff work that has done greater harm to the administration than a badly drafted Holocaust proclamation. It also prominently mentioned that Trump was slow to condemn an alleged wave of anti-Semitism sweeping through the country earlier this year that was widely blamed on him by liberal Jewish groups. But it left out the fact that the JCC bomb threats that was the only real evidence cited for this trend turned out to be the result of a disturbed Israeli teenager not alt-right trolls or far right extremists enflamed by Trump’s rhetoric. That the Times would attempt to revive claims of Trump anti-Semitism after that fiasco is a bad joke.

Leaving aside the obvious Jewish connections in Trump’s family or the many appointments of Jews to prominent posts, it was telling that Bruni didn’t think Trump’s strong embrace of Israel after eight years of President Obama’s policy of more “daylight” between the two allies or his administration’s stalwart opposition to the anti-Semitic campaign being waged against the Jewish state at United Nations agencies to be worth mentioning.

“Bruni … thinks another attempt to play the anti-Semitism card against Trump is more important than addressing the left’s role in pushing anti-Semitic memes into the mainstream.”

Perhaps it’s fair game for Bruni to also blame Trump for being insufficiently supportive of Gay Pride events, but only days earlier Jewish marchers were thrown out of a Chicago march because its Israel-hating leftist organizers consider the sight of Stars of David to be offensive. The belief in intersectionality that causes anti-Trump resistance organizer Linda Sarsour and others on the left to link the war against Zionism to the struggles of minorities is producing a rash of similar anti-Semitic incidents.

As the Obama State Department noted, there is a rising tide of anti-Semitism spreading around the globe. It is fueled by hatred for Israel that unites Islamists and liberal elites in a strange alliance that is creating a hostile environment for Jews. It’s in that context that actions, like those taken by UNESCO, the United Nations cultural organization, to essentially erase Jewish history and deny Israel’s ties to holy sites in Jerusalem and Hebron, are taking place.

Yet Bruni, playing to the liberal prejudices of the Times’ readership, thinks another attempt to play the anti-Semitism card against Trump is more important than addressing the left’s role in pushing anti-Semitic memes into the mainstream.

One needn’t be a fan of Trump or think well of his largely dysfunctional administration or its policies to understand that he is not the one who is seeking to ostracize Jews for expressing their identity or support for Israel. Nor, like the anti-Zionist Jewish Voice for Peace, is he blaming American Jews for alleged police violence against American blacks because of their support for U.S.-Israel homeland security cooperation. To the contrary, Nikki Haley, his U.N. ambassador, has become the country’s leading voice defending Jewish rights against anti-Semites in the tradition of Daniel Patrick Moynihan.

What The Times is doing is signaling its readers that liberals must ignore or downplay genuine anti-Semitic outrages on the political left in order to pursue the higher goal of resisting Trump even if that means buying into false or misleading charges. Trump may be criticized for his obvious failings as a leader, but if otherwise principled Jewish liberals are willing to play this kind of partisan game at a time when the threat from anti-Semitism is on the rise, it will be they who will have lost their moral compasses, not Trump.