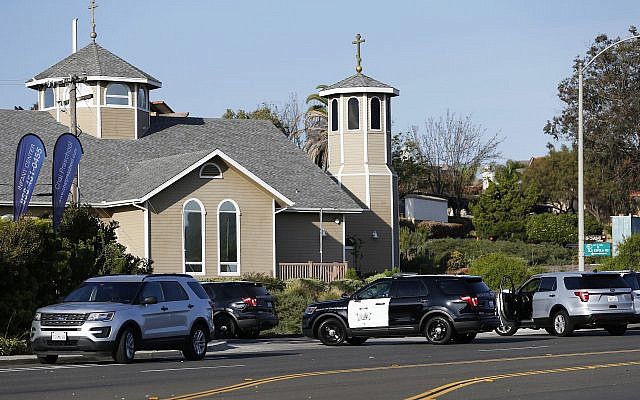 Police vehicles gather around the synagogue where a shooting took place in Poway, Calif., April 27, 2019. A suspect has been identified as 19-year-old John Earnest, authorities said. (Xinhua/ via Getty Images)

(JTA) — The parents of the alleged Poway synagogue shooter issued a statement condemning their son and the “darkness” that led to “this evil and despicable act.”

“Our son’s actions were informed by people we do not know, and ideas we do not hold,” the mother and father of John Earnest wrote Monday. “Like our other five children, he was raised in a family, a faith and a community that all rejected hate and taught that love must be the motive for everything we do. How our son was attracted to such darkness is a terrifying mystery to us.”

Earnest, 19, was charged with murder Sunday afternoon in the attack of the previous morning at Chabad of Poway. Before the shooting, on the last day of Passover, someone identifying himself as John Earnest posted a link to a hate-filled “manifesto” filled with anti-Semitic and white nationalist sentiment.

His father, John, is a longtime science teacher at Mt. Carmel High School in San Diego, from which the younger Earnest graduated in 2017.

Lori Gilbert-Kaye, 60, was killed in the Shabbat morning attack and three people, including the synagogue’s rabbi and an 8-year-old girl, were injured.

The family said they will likely not comment further “until after the criminal case is resolved.”