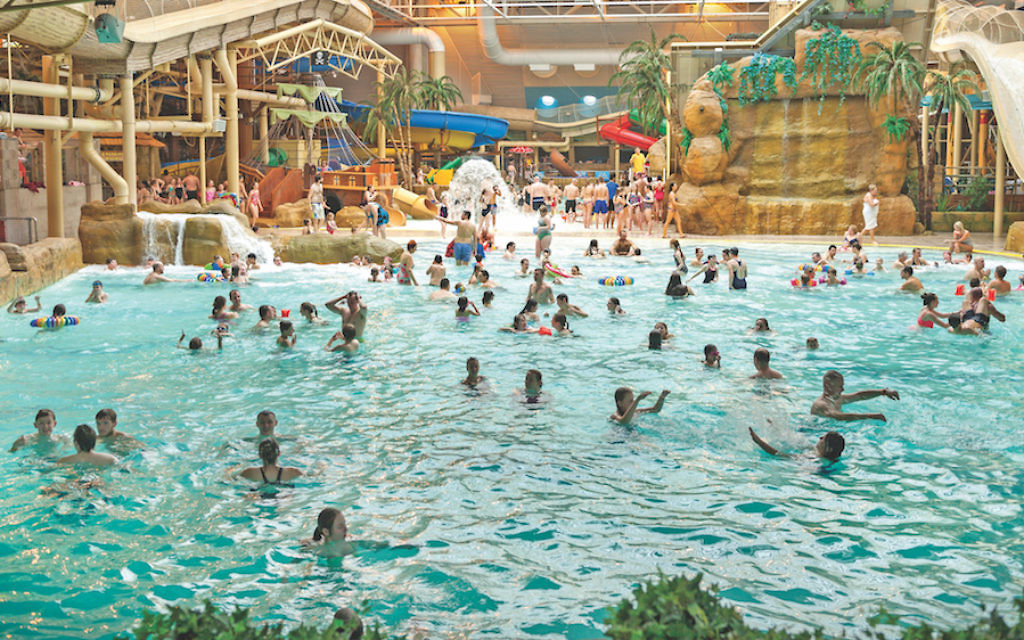 The pound is severely weakened as the world absorbs Britain’s surprise decision to leave the European Union, meaning that the dollar cost of vacationing in the UK has just dropped significantly. If you have dreamed of taking the whole family to Britain, there has rarely been a better time to do it.

Everyone in the family will be excited to see the iconic sites of London, but how do you get the youngsters to stay on board with lesser-known elements of Britain, especially the Jewish heritage? My strategy for successful family travel in Britain is to pair the sites that the grown-ups think are important with the sites that the kids are simply going to love.

It is a scheduling trick that keeps my young family jazzed, getting everyone involved in the activity that has more of a cultural or educational bent, and getting everyone blowing off steam together at child-oriented attractions.
Here are three of my favorite pairings:

In London, take advantage of the thriving Jewish scene to visit an exhibition, take a tour or go to an event that gives you an insight into an aspect of Jewish-British life. Consider a walking tour of the East End, which was hub of Jewish immigration in the late 1800s, or one of the many events at JW3, the London Jewish Cultural Centre. Or if you like art, visit the Ben Uri Gallery, where a notable number of the 1,300 works are by Jewish artists who moved to the UK from mainland Europe, or whose parents made the move, including David Bomberg (who famously combined cubism and futurism), Mark Gertler (who was famous for his portraits), and the contemporary painter Frank Auerbach.

A London exhibition that I am anticipating is “Scots Jews,” the fruits of a year-and-a-half-long photography project by the talented Judah Passow (it showed in 2014 at the 92nd Street Y in Manhattan). A Scottish man commissioned him to document what he believed to be a community on its last legs — only to find that Passow put together a collection that depicts a Scottish community with a bright future. “It’s 7,000 people but its vibrancy is out of all proportion to its numbers,” he told me, adding: “I found the original premise couldn’t be further from the truth. OK if you’re counting noses, but the future of a community in my book is about the quality of life, including the quality of communal life.”

He photographed people in synagogue, at work and during recreation time. His adventures took him to the highlands with a Jewish shepherdess and to whiskey distilleries with a Jewish analytical chemist who travels from distillery to distillery to certify the purity of Scotch whiskey (a dream junket for many, but Passow doesn’t like whiskey and declined all tasters). He encountered a community with a distinct identity. “They’ll wear kilts to a wedding, often with a special Jewish tartan; they celebrate Burns Night [to honor Scotland’s national poet]; and they proudly say that their haggis at their burns night will be kosher.”

Passow’s collection will be at the Jewish Museum London from Sept. 16 through Feb. 12, 2017. Jewishmuseum.org.uk

My kid-oriented pick for London is KidZania, a “city” where those aged 4 to 14 get to run the place. It is a 75,000-square-foot complex with many of the fixtures of a real city in miniature — a hospital, a TV studio, a bank, a police station, an advertising agency, a beauty salon, and so on. Young visitors need to find their way in the big-small city by getting jobs and performing tasks involved in those jobs, earning money. The local currency is KidZos, and once children earn enough KidZos they can open a bank account, use ATMs, and spend the money on recreational activities.

You can be walking along the “street” in KidZania when the local police force, consisting of children on a 15-minute patrol, cordon off the street as the fire brigade, also staffed by kids, and deal with a (staged) fire. Reporters from the nearby newsroom are likely to be busy putting together the front page story, which they will type up and print out, as the guide on the miniature tour bus — also a child — waits to start a tour.

Real companies have placed their branding in KidZania, which helps to create something of the real-city feel. The Aviation Academy, where there is a flight simulator, is branded British Airways, car enthusiasts head to the Renault Engineering Centre, and the TV dispatches are made from KidZania’s Al Jazeera studio. A U.S. version is in the planning stages, but until it arrives, KidZania is well worth integrating into a London itinerary.
Londonkidzania.com

Avoid the temptation to spend all your time in London, and ensure that you explore other parts of the UK. Yorkshire, a county familiar to many Americans because it was the setting for the fictional “Downton Abbey,” has major significance in Jewish history.
York, historically the most important city in the region, is where a shocking pogroms took place. English Heritage, the non-profit that oversees the site of the pogrom, calls it “one of the most notorious events in English history.”

In 1189 there had been anti-Jewish riots in some parts of England. In York there was anti-Jewish violence the next year, and around 150 Jews took refuge in a royal castle. The sad story ended just before Passover of 1190 with an angry anti-Jewish mob gathering below the castle. The rabbi reached the conclusion that there was no safe way out, and the Jews there committed suicide, with fathers killing their families and then themselves, with the last men remaining setting the tower on fire so that the Jew-haters did not desecrate their bodies.

Though this pogrom was so long ago, it represents an important part of British-Jewish identity, and many British Jews will be reluctant to visit York, with some mistakenly believing that there is a herem or rabbinic decree against doing so. On the Fast of Av, British synagogues recite a dirge to commemorate the tragedy.

Clifford’s Tower, where the pogrom took place, was rebuilt shortly afterwards, and is today open to visitors. You can see the plaque that commemorates the tragedy, and tour the tower, which is interesting both for its Jewish significance and the fact that it is the largest remaining part of York Castle, once the center of government for the north of England.

After visiting the tower you should explore the beautiful city of York and then — for a complete change of tempo — head to one of the quirkiest amusement attractions that Britain has to offer.

Diggerland is a celebration one of Brits’ great loves — excavators, or to use the preferred term in their version of English, diggers. At Diggerland, even young children get to drive diggers, excavate from the cabs of diggers, and play games that depend on their ability to pick up and drop objects, or knock over ten pin bowling skittles using the arm of a digger.

Diggerland is quite small, but it is packed with digger-related activities and rides. The rides are a far cry from the choreographed amusement park rides common today, where all the moves are pre-programmed by a computer. One of them, Spindizzy, consists of park staff fastening you in with a seatbelt where rubble normally goes, and whizzing you around and around. The seats have been built into the bucket of the digger and the operator controls the ride from the cab.

Spindizzy is wild but there are less extreme rides, such as the digger that raises you 50 feet into the air and then drops you, or to go to the really gentle end of the spectrum, the carousel that has been made by adapting a JCB 8060 Excavator. In addition to its Yorkshire park, Diggerland has branches in the Kent, Devon and Durham regions.
Diggerland.com

As many of Britain’s regional communities are shrinking, Manchester’s is growing, and fast. The community there is buoyant, and its synagogues, schools, and restaurants are full.
Manchester Jewry had its beginnings in 1788 when 15 traders settled there, and Manchester Jewish Museum tells the fascinating story of the community from that point onwards. The original 15 people were followed by others from Germany, Holland and elsewhere, and then by further immigration waves.

What is so interesting about Manchester Jewry is the extent to which its history is bound up with that of the industrial revolution of the late 1700s and early 1800s which spread internationally from the UK and popularized new manufacturing processes. The original 15 Manchester Jews were drawn to the city because if its importance in the cotton trade in the new industrial era, as were many other Jews for years to come.

The museum — Britain’s only Jewish Museum outside of London — is located in the oldest surviving synagogue building in Manchester, which was completed in 1874. It is a beautiful building, noted for its stained-glass windows. The exhibitions tell the story of the community and introduce visitors to some of its members who made a mark on Jewish and general society over the years.

From Manchester, delight the children and take the hour-long drive to Blackpool — the very same drive that Manchester Jews made for vacations before air travel became common. In Blackpool you will find Sandcastle Waterpark, Britain’s largest indoor waterpark.

The slides are truly thrilling, such as the Aztec Falls, which pulls you down the descent in darkness and then whirls you around a massive bowl, and Master Blaster, the world’s longest indoor “rollercoaster” waterslide. You board a “raft” and are then pulled uphill and propelled at fast speeds down big dips. The Sidewinder dispatches you off an almost-vertical drop, in the first indoor ride of its kind in the world.

Sandcastle has just earned a place in Guinness World Records for setting a new record for the number of people down a waterslide in an hour. The record had been 396 people and is now 529.

At the waterpark, as well as the intense rides, there are large areas for swimming. One section has waves and another has currents. There are gentle slides for very small children, and there is a pretend ship where toddlers like to climb through tunnels and shoot water cannons. Sandcastle makes big efforts to welcome disabled swimmers, offering special devices to allow them to take the best possible advantage of the park — and even gives them cut-price admission. All around, it is a user-friendly place, from the provision of family changing rooms with large cubicles to the system that allows you to store credit on a waterproof electronic bracelet to buy a drink or snack without heading back to your locker to find cash.

Blackpool is a traditional British resort, and thoroughly unpretentious. When you have finished at Sandcastle take a walk along the beachside, try to win a prize at bingo even if it’s inevitably worth less than game fee, ride one of the charming trams, and catch a quintessentially British seaside “Punch and Judy” show.