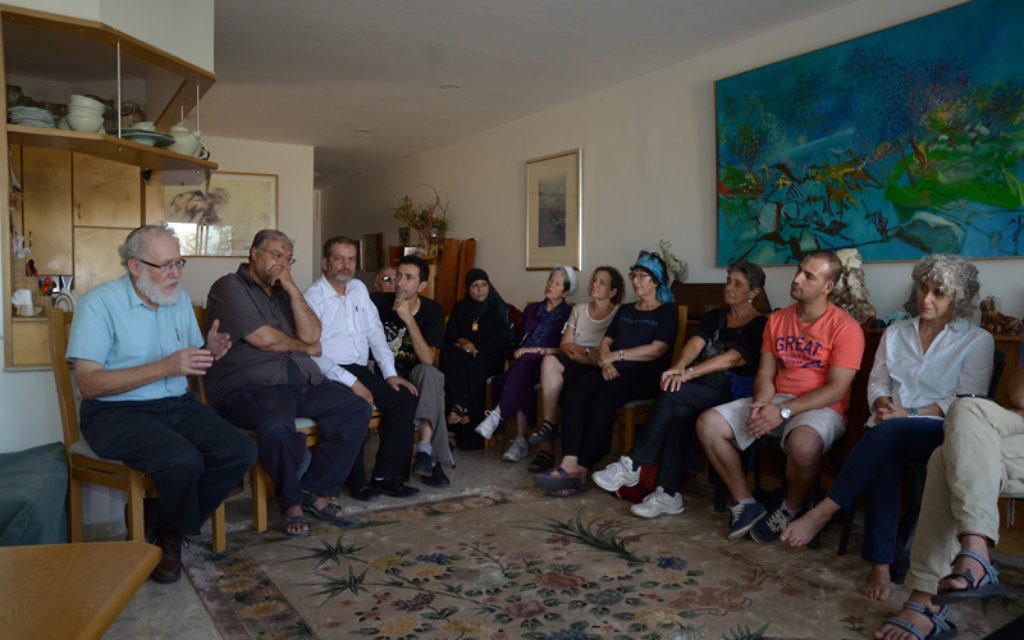 Jerusalem – An interfaith group gathered in a private home Monday (Sept. 21) to head off potential tensions over how Jews and Muslims celebrate Yom Kippur and Eid al-Adha, two holidays that overlap this year.

The meeting of the Abrahamic Reunion took on added significance in Jerusalem, where more than a week of violent clashes between Israelis and Palestinians on the Temple Mount have spilled into the streets of East Jerusalem.

The day culminated with an interfaith peace walk between the eastern and western parts of the city. Israel captured East Jerusalem in 1967 and considers it part of its capital. The Palestinians say East Jerusalem must be the capital of a future Palestinian state.

When the holidays coincided last year, “it was a source of tension between some Jews and Arabs,” said Eliyahu McLean, the group’s coordinator. “Muslims were out celebrating and Jews, who were fasting, felt the celebrations were insensitive. Some violence ensued and we want to prevent that from happening again.”

McLean, who is Jewish, noted that the Abrahamic Reunion was launched at the Parliament of the World’s Religions in 2004, during another tough period: the tail end of the second Palestinian intifada, or uprising.

The coordinator said that many of his Jewish friends ask him why he continues to meet with Arabs at times like these.

Occasionally he asks himself the same thing.

He recalled how, during last summer’s Israel-Hamas war, he was riding in a bus with his wife and children in northern Israel when Arabs pelted the bus with stones and firebombs.

“It was a miracle the bus didn’t explode. And then, the very next day, a group of Jews drove up in a van and tried to kidnap the son of my Muslim partner, Sheikh Ghassan Manasra. Both of us had reason to say, ‘Revenge is the only answer to this conflict.’”

Instead, the men organized a festive iftar dinner during Ramadan with kosher food so Jews could participate. In all, 250 people attended the dinner and participated in a peace walk through the streets of Nazareth, a Christian and Muslim city afflicted with rioting at the time.

“It was a day when Israeli soldiers and Palestinian civilians were killed in Gaza, but we came together for a jihad of peace. We walked arm-in-arm. This was and is our battle against fear and hate.”

“If Jews and Arabs don’t get to know each other on a grass-roots level, nothing will change,” said Dabis, who recently co-founded “Home,” a Jewish-Arab outreach organization. He lives in the Palestinian city of Ramallah. His Jewish co-founder, Inon Dan Kahati, lives in Jerusalem.

Dabis has suffered from a progressive neurological condition since 2001, when, he said, Israeli soldiers fired gas at his car when he inadvertently entered a closed military zone. He uses a wheelchair.

Putting aside bitterness and engaging in coexistence work, he said, helped him emerge from the two-year depression he endured immediately after being injured.

“Just yesterday Inon and I went to a beer festival in Taibeh,” an Arab town, “and talked to Israelis. I think we showed them that Arabs are people, just like they are.”

In 1997, her son, Noam, was badly injured in a bombing in downtown Jerusalem. At the hospital, she was whisked into the emergency room.

“I was approached by this doctor, who told me his name was Dr. Khoury. I said: ‘That’s an Arab name. One Arab tried to kill my son and you’re trying to save him.’ I realized that I could go in the direction of ‘All Arabs want to kill us,’ but instead I saw that every person is a human being and some are good and some are bad.”

All too often, Rozenman said, “we see religion being used as a pretext for violent acts and violent words. Religions are not in conflict. People use religion to create conflict.”

Rozenman said the 15 years she has spent working with like-minded Muslims, Christians, Jews and Druze is her way of “strengthening the forces of sanity and nonviolence so other mothers do not have to suffer what I suffered.”