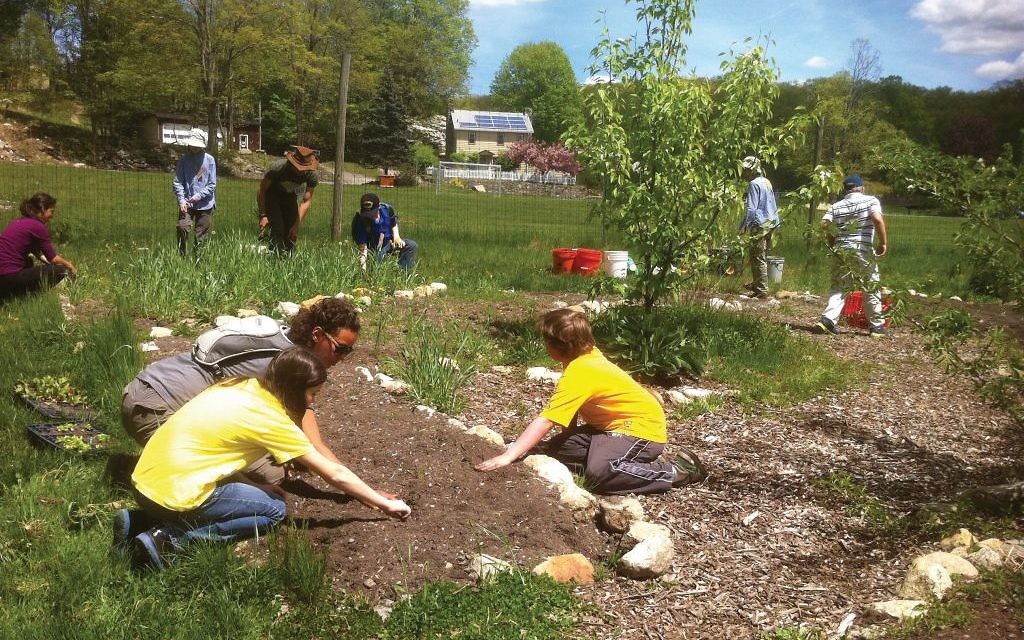 Putnam Valley, N.Y. — On a sunny afternoon last week, while the rest of New York’s schoolchildren were stuck indoors, 15 kids were literally rolling around in the dirt while their parents looked on approvingly.

The children, most of whom are home-schooled, are students in the Farm and Forest Home School program, a unique project of Eden Village Camp and the Jewish Farm School.

In its second year, Farm and Forest — believed to be the only example of a Jewish overnight camp catering specifically to home-schooled children — teaches a curriculum of nature-based education and Jewish values. Participants, who range in age from 5-14, come to Eden Village Camp, in this Hudson Valley town, every few weeks during the fall and spring to learn science, agriculture, and Jewish thought in a hands-on setting.

Each session draws a few dozen participants, with 10 families consistently attending the program.

Home schooling has become increasingly common in the United States in recent years, with the U.S. Department of Education reporting 1.5 million home-schooled children nationally and 125,000 in New York state. While no data is available on Jewish families who home school, Ellen Brown — who coordinates Farm and Forest Home School — said that it is becoming more common than it once had been. Officials at the Torah Home Education Group, which sponsors an annual conference, put the number of Jewish home-schooling families at between several hundred and a few thousand.

At last week’s session, the group went on a nature walk in the forest together then broke into two groups: the ones 8 and under scavenged for seeds and worms across the farm while the older group wrestled with some weeds before planting kale, chard and collard greens.

Four farm educators escort the children around the farm throughout the day to various sessions in music, crafts, gardening, and sports. The program teaches children how to camouflage, build outdoor shelters, and create paper, bows and arrows from scratch. They also learn about compost, farm-to-table cooking, social justice concerning food, and all about the different smells, tastes and textures of herbs.

“The program provides a lot of different things for the people attending,” Brown said. “Some like the aspect of seeing the home-school community, others like the environmental components. For some, even just getting their kids outside is enough.”

Later in the afternoon, while the children squatted with the farm’s goats and chickens, Silvia Tripoli, a Bushwick mother of 5-year-old Matta and 1-year-old Giamo, said the program is perfect for her children because it helps with social aspects.

“It’s not a secret that home schooling can be really difficult socially for my kids,” Tripoli said. “But Matta made a lot of friends here last sessions, so its good to come back to keep those relationships. There are also a lot of people from the city here so it’s good to run in the same circles.”

Tripoli also said the program helped her kids learn to adapt rural activities into their urban setting. During the previous fall session, Matta learned about shelter building and is currently building shelter structures in their backyard in Brooklyn: after attending a session about edible weeds, Matta makes sure to sample all of them when they go to the park.

For Oona Hart, a mother from Cobble Hill, Brooklyn, the most important element of the program is to have her two children, Ocean and Billie, spend the day outdoors. She said the freedom to discover was something they never could experience in the city.

“This is a special, unique environment where my children can be safe to explore,” Hart said. “They also gain a better understanding with hands-on learning because it has more impact to participate than to be a passive learner. For example, last session, they baked challah, but they learned the processes like harvesting, willowing, and threshing, and so their food becomes so much more meaningful to them.”

Hart said her son, Ocean, 6, loves gardening and has gained a more acute sense of sound, smell and taste after learning about various plants: he asks plenty of nontraditional questions now, Hart said, and she attributes that to his unique learning setting. Hart has been home schooling her children for four years now, and she said she appreciated the niche group of parents the Farm and Forest Home School was catering to.

“In an outdoor setting like this, there’s opportunity to address other topics kids don’t always think about, like food, plants and animals,” she said. “We love that its so progressive and open-minded here and that the Jewish values they teach my kids are meaningful and accessible.”

Leah Fine, a mother from Riverdale, pulled her 12-year-old son, Koby out of a yeshiva last year and he’s been attending home school classes at various museums and institutions around New York. Fine said the difference in her son’s confidence level in learning since he switched to home-schooling has been “like night and day,” and that this outdoors program was just the right “down and dirty” experience he needed out of his system.

“Koby really enjoys hands-on learning, and he’s well-versed in Jewish curriculum too, so it’s amazing for him to experience the Jewish laws of farming here. This is our first time at the program, but I can tell by how engaged he is, we’ll be back,” Fine said, as Koby soared across a zip line in the camp’s playground.

Lucy Alderson, a 10-year-old fourth grader from Middleton, N.J., was one of the few participants who is not home-schooled. Her mother pulled her out of public school for a day to attend the program for the first time.

“I really like outdoors things, like plants and animals,” Lucy said outside the farm’s greenhouse. “My father works for NOAA [National Oceanic and Atmospheric Administration], so I know a lot about nature. It’s really fun to do that here, especially because I don’t get to do that type of thing at my school. I have to come back.”