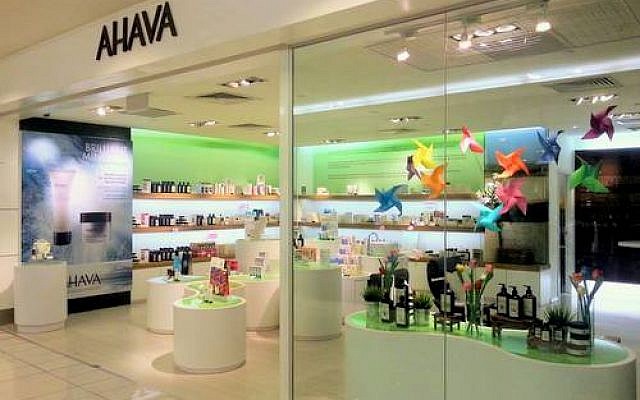 Illustrative photo of an Ahava store. Via SHOPSinSG.com

In the 1990s, about 10 Mynas, a bird species native to southeast Asia, escaped a bird park in Ramat Gan and took over the skies of Israel. Aggressive from the get-go, the transplanted species thrived by evolving predatory behaviors it did not display back home, such as robbing nests and forming highly combative flocks.

The Mynas are something I keep in mind when I try to explain the mindset of friends like Ravit. Israelis may be notorious for being blunt, abrasive and aggressive, but Ravit’s behavior isn’t typically Israeli: If anything, it’s uniquely Israeli-American.

A New York resident for the past 15 years, Ravit is an Israeli-American of Yemeni descent. She’s in her early 40s, attractive, divorced. A mother of an 11-year-old son who lives with his Jewish-American father, she scratches out a living as a part-time cosmetics saleswoman, and draws upon an ever-changing string of lovers to supplement her income. In both her professional and personal life, her credo is the same: Take ’em for all they got.

Standing with her on Sixth Avenue in Manhattan one recent sunny Sunday, I watched Ravit nail male customer after male customer by stepping into their path, talking at them too rapidly to be understood and holding their gaze with her emerald-green eyes while she quickly anointed their hands with a sticky Dead Sea product, which they then had to follow her into the store to wash off. For women, her pitch involved slyly commenting on the bags under their eyes, then holding out a glittering free sample tube and whispering, “I’ll make that go away, right now, for free.”

“You don’t think about if you are bothering them or pressuring them or putting them on the spot — you don’t care about how you are making them feel at all,” she explained. “You care about making a sale.”

Her attitude toward her American sugar-daddies is similar. “They come and they go; I don’t try to make them stay. For me it’s just for fun, for sex and for money,” she told me. “We don’t really understand each other anyway,” she added later. “I’ve tried, but in the end it always feels like we can’t get into each other’s heads.”

While Ravit’s case study could plausibly be discounted as an example of a manipulative person who just happens to hail from Israel, the same thing almost happened to me. After several years of living in a de-facto Israeli ghetto in Midwood, Brooklyn, and working exclusively with Israelis, my attitude toward American Jews was becoming increasingly jaded. Even when they said they wanted to get to know me, they seemed offended by my honest feelings and opinions (such as “You are wrong,” “What are you, stupid?” or “Don’t be such a wimp,” all perfectly normal forms of expression back home).

Exhausted by the nearly constant sting of rejection, I gave up trying and began premising my sentences by stating: “I’m Israeli, I can’t help but being honest, so…” and going for the jugular. I was saying and doing things I would never have done back home, because if I’m damned if I do and damned if I don’t, I might as well do…

I could see a similar trend among other young compatriots in my area: the locksmiths, the salespeople, the real-estate agents — they were all evolving extra-thick skin and extra-sharp talons, because, lacking that easy understanding and fundamental sense of connection that is shared by most Israeli Jews, Americans and American Jews began to look more like prey than like fellow humans.

Most of those people have long returned to Israel. A few, like me, settled down in America and found their way back into society, often by lucking into relationships and jobs within the broader Jewish-American establishment. Fewer yet are like Ravit, a transplanted species that never took root but never let go and has learned to survive in the gaps between itself and everyone else.

It’s hard to say how the macro relationships between Israelis in America and American Jews play into this, if at all. If the government of Israel were a tad less dismissive towards the feelings and beliefs of American Jews, would Ravit’s attitude have been different? Will the evolving Israeli-American establishment, which speaks in my name, really ease the transition of people such as myself? Could the Israeli-and Jewish-American establishments come together to build a big enough tent to shelter people as different as myself and Ravit?

Who knows. For now, we have empathy and free samples. “Come,” she says, at the end of our talk. “I’ll take care of these eye-bags for you.”