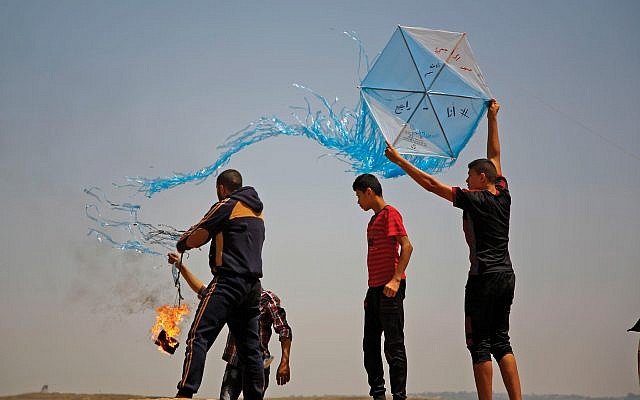 Our kids are dressing in black today, November 6. It’s not some kind of delayed Halloween event or Guy Fawkes stunt. It’s a protest organized by the Union of High School Students (who knew there was such a thing?), in solidarity with the kids from what’s now called the “Gaza envelope.” These are the cities and towns 10, 20, and 30 km on the Israeli side of the Gaza fence whose residents haven’t slept much in the last few months. Alarms warning of incoming rocket fire have been sounded every few days. Hundreds of acres of fields, forests, and play-parks have been incinerated and the scorched earth is everywhere to be seen. Dozens of balloons and kites, booby-trapped with grenades and bombs, have landed in the area. For kids in the “envelope,” life has become unlivable and it is time for real solutions.

Of course, life for Gazans on the Gaza side of the “envelope” isn’t exactly a picnic, with unemployment at 48 percent. Real solutions for Gaza’s economic woes exist, and have been advanced, ironically, by emissaries of the much-reviled U.S. President. They involve detaching Gaza from its dependence on Iranian-funded “resistance” to Israel and directing money from the Saudis and other Gulf Arabs, as well as the U.S. and Egypt, to building an economic opportunity zone on the Egyptian side of the Gaza-Egypt border. The plan will solve Gaza’s economic woes but will not provide an answer to Gazans desire to move back to Israel. And for that reason it is vehemently opposed by Gaza’s Hamas rulers, by its Iranian and Qatari funders, and even by the more moderate Palestinian leadership in Ramallah.

It’s ironic that as Americans, including millions of U.S. Jews go to the polls, our kids are standing up to say, “enough is enough”.

American Jews have also had enough: most argue that the Pittsburgh massacre was influenced by their President’s encouragement of white nationalism, of anti-immigration conspiracy theories and outright lies. Overwhelming support for the Democrats is expected among US Jews, perhaps at even higher rates than in the last presidential election. The irony is that the Iran agreement is a central plank of Democratic foreign policy. The agreement released Iranian resources and allowed Iran to spend its money on supporting Hamas and Hezbollah. Democratic congressmen and senators have opposed Trump’s repudiation of the agreement. In another example of ironic timing, the toughest elements of the sanctions sparked by Trump’s repudiation of the agreement take effect today. This will force the Iranian leadership to choose between stabilizing its faltering economy and sending support to Hamas and Hezbollah. Israel’s defense minister called this a “breath of fresh air.” It will certainly provide more clean air for the Gaza envelope, by cutting off the funding that supports Hamas’ war on Israel.  But U.S. Jews, quite reasonably, are opting to prioritize their own safety over concern with Gaza, its envelope, and our kids’ black shirts.

It’s reasonable and rational for each person to vote in their own self-interest. “If I don’t support myself, who will support me? ” asked Hillel.

But Jewish history argues loudly and clearly that Jews need to have a broader perspective: the corollary statement: “If I support only myself, what am I?” needs to apply globally.

Self-interest may dictate that American Jews support the Democrats and that Israeli leaders support U.S. policies that oppose Iran. But a global Jewish perspective demands a different calculus. It demands that Israeli political leaders use their access to U.S. leadership to explore ways in which Trump can change his rhetoric to dampen white nationalism, perhaps by highlighting how the economic growth for which he claims credit benefits Americans of all races.

In parallel, it demands that American Jews concern themselves with the destructive impact of the Iran deal on the lives and security of Israelis, especially those living outside of Tel Aviv and Jerusalem. It demands that they express their concerns clearly and directly to the political leaders of both parties.

Surveys consistently show how concerned American Jews are with Israel’s continued occupation of the West Bank. Israelis are also concerned about the anomalous legal and political realities in the West Bank. But the reality today is that without the presence of the IDF, the West Bank would pass to control of Hamas, bringing the threat of “scorched earth” even closer to Tel Aviv and Jerusalem. A realistic peace plan requires the weakening of Hamas, which requires a weakening of Hamas’ prime funders: Iran and Qatar. Here too, the question is whether American Jews are more concerned with the political rights of West Bank Arabs or with the day-to-day security of average Israelis. Israel’s experiment in withdrawing from Gaza offers no reason to hope that a similar withdrawal from the West Bank would result in an increase in West Bank Arabs’ political rights or of Israel’s security. For that reason, no major Israeli political party advocates such a step. These realities are hard for liberal American Jews to accept but accepting them is part of a global Jewish perspective.

American Jews are alarmed about increased anti-Semitism. Israeli kids are alarmed about the scorched-earth reality around Gaza. We can each follow self-interest, and solve our own problems, recognizing that circumstances demand we work against each other. Or we can adopt a global Jewish perspective and concern ourselves with each other’s security.

Then maybe our kids won’t dress in black anymore.

Shawn Zelig Aster lives in Beersheva and teaches history of the Biblical period at an Israeli university.