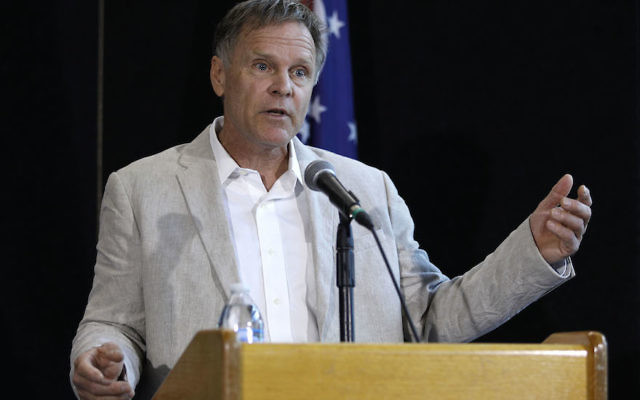 Fred Warmbier, father of Otto Warmbier, holding a news conference in Wyoming, Ohio, while wearing the jacket his son wore when he gave a forced confession in North Korea, June 15, 2017. (Bill Pugliano/Getty Images)

The family of Otto Warmbier, the University of Virginia student imprisoned by North Korea who died after being sent back comatose to the United States, hid his Jewishness from the public as negotiations for his release took place, a family spokesman said.

Warmbier, 22, a Cincinnati native, was traveling on a student tour of North Korea last year when he was arrested and sentenced to 15 years of hard labor for stealing a propaganda poster. After international outrage and over a year of imprisonment, North Korea released Warmbier last week, saying his health had deteriorated after a bout of botulism. Warmbier’s doctors said he suffered extensive brain damage. He died June 19 in Cincinnati.

The family spokesman, Mickey Bergman, told The Times of Israel that the family chose not to disclose Warmbier’s Judaism as negotiations went forward so as not to embarrass North Korea, which had announced that Warmbier stole the poster on orders from the Friendship United Methodist Church in Wyoming, Ohio.

“If that’s what their story is, there’s no point fighting it if your objective is to get him out,” Bergman, who worked on negotiations for the student’s release, told the Israeli daily. “When you realize he’s Jewish, you realize how ridiculous that claim is.”

JTA reported last week, before his death, that Warmbier became active at the University of Virginia campus Hillel following a 2014 Birthright trip to Israel. His mother is Jewish, but the family is not observant, according to Bergman. 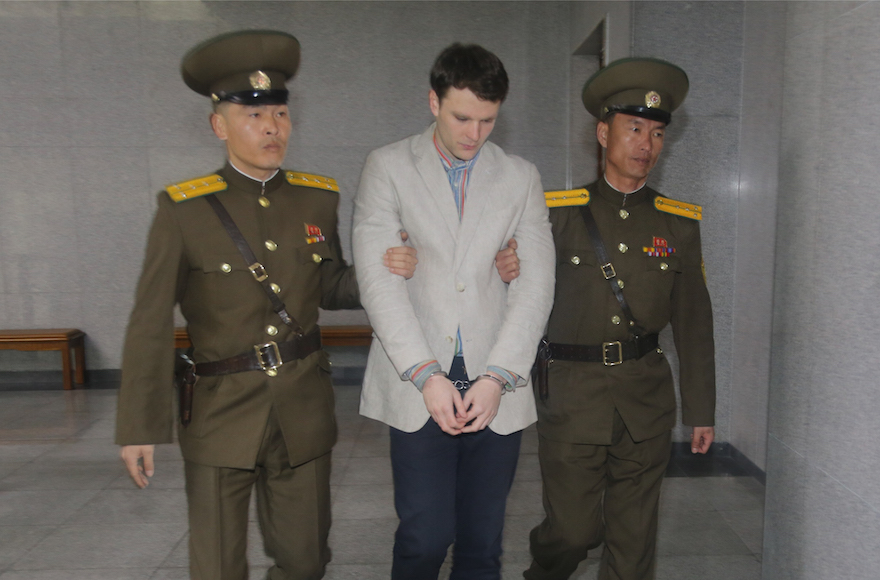 Otto Warmbier arriving at a court for his trial in Pyongyang, March 16, 2015. (Xinhua/Lu Rui via Getty Images)

A public memorial for Warmbier was scheduled to be held Thursday morning at Wyoming High School, officiated by Rabbi Jake Rubin, the University of Virginia campus Hillel director who traveled with Warmbier to Israel, The Times of Israel reported. He will be buried at a nonsectarian cemetery.

According to the newspaper, the family will receive visitors at their home but will not be observing shiva, the visitation period that follows a Jewish funeral.