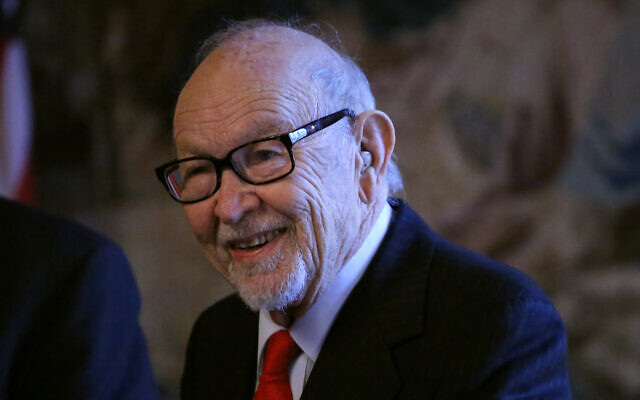 Justus Rosenberg, a Bard professor who fought in the French resistance, attends an interview before receiving the award of the French Legion of Honor medal from French ambassador to the United States Gerard Araud at the French Consulate, Mar. 30, 2017 in New York. (Kena Betancur/AFP via Getty Images)

Good morning, New York! Join our colleagues at The Nosher tonight at 7:30 p.m. for the second in a series of Hanukkah cooking classes on Zoom. On the menu: traditional Cuban-style tostones. Register here.

BACKLASH: Feldheim Publishers of Nanuet, New York, tweeted that it would remove Chaim Walder’s books from shelves while sexual abuse allegations against the prolific author of children’s books are being investigated. (JTA)

REMEMBERING: Justus Rosenberg, a professor at Bard College whose long career teaching literature was preceded by a remarkable tenure in the French resistance during World War II, died last month at the age of 100. (JTA)

THE FLIGHT: Actor Jeff Goldblum, who moved to New York City as a teenager, will narrate a new Disney-style ride, opening in midtown, that will simulate a flight over the city’s iconic skyline and landmarks. (Time Out NY)

NOT ON MY PENTHOUSE: Neighbors are objecting to the two-story glass pavilion that investor Bill Ackman and his wife, the Israeli-born architect and designer Neri Oxman, want to build on the roof of their apartment building on West 77th Street. (New York Times)

TRADITION: Congregation Shearith Israel, the venerable Spanish and Portuguese Synagogue on West 70th Street, will feature a special holiday-themed liturgy on Thanksgiving Day, marking the holiday as it has since George Washington declared the first Thanksgiving in 1789. (New York Post)

SAME AS IT EVER WAS: The mass immigration of Jews to New York City in the 1880s sparked xenophobic fears that are echoed today at the federal trial of those who organized and led the deadly white supremacist rally in Charlottesville, historian Jonathan Sarna writes. (The Conversation)

Liam Elkind, a senior at Yale and a 2017 graduate of Stuyvesant High School, has been selected as a Rhodes Scholar for 2022. The founder of a nonprofit that delivered essential supplies to elderly and other homebound people during the pandemic, Elkind was named earlier this year to The Jewish Week’s list of “36 Under 36” young leaders making a difference. Rhodes Scholarships provide all expenses for two or three years of study at the University of Oxford.

The Brooklyn Conservatory of Music announced the recipients of the Klezmer New Leaders Fellowship: musician and writer Melissa Markoff, cellist and arranger Beth Silver and drummer, composer and educator Lorie Wolf. This program, now in its second year, was created for women and nonbinary leaders on the klezmer scene who want to expand their knowledge of klezmer repertoire, styles, arranging, improvisation and composition.

Rabbi Eliezer Diamond, Rabbi Judah Nadich Associate Professor of Talmud and Rabbinics at the Jewish Theological Seminary, will look at Jewish sources that offer different ways of thinking about work and some wisdom about how to make the work we do work for us. Part of JTS’s fall learning series, “Six Days Shall You Labor: Perspectives on Work in Jewish Text and Tradition.” Register here. 2:00 p.m.

Join the Workers Circle on Facebook Live for a short-form series, Answering the Call, a look at some of the most important issues and tumultuous decades of the 20th century as reported in the pages of the Workers Circle national in-house publication, The Call. Anthony Russell and Workers Circle Social Justice Organizer Jonathan Taubes will discuss voting rights, labor, racism and Jewish assimilation from the ’30s into the ’60s. 3:00 p.m.