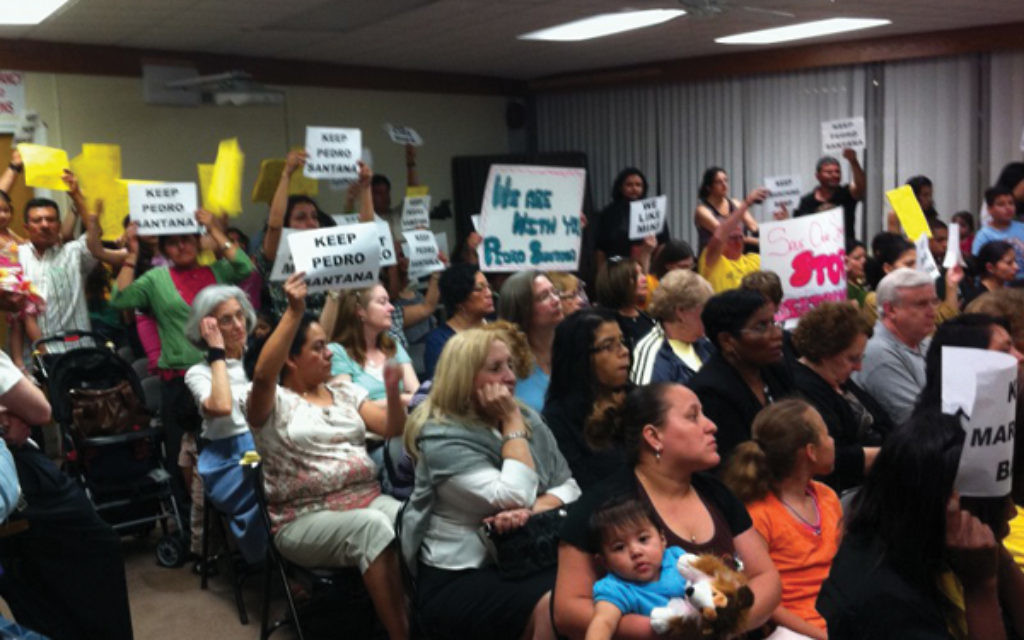 An Orthodox social justice group has joined the call for state intervention in the East Ramapo school district, where the haredi-controlled board is accused of siphoning taxpayer money to private yeshivas.

In a petition to Gov. Andrew Cuomo, the organization, Uri L’Tzedek, asks for state “fiscal and administrative oversight” of the Rockland County district, where the board has slashed academic offerings, extracurricular programs and more than 400 staff positions over the past five years. Between 2009 and 2012, elementary school class size has risen from an average of 20 to 25.

On Tuesday, Rabbi Hart spoke at an event calling for state intervention organized by the recently formed Rockland Clergy for Social Justice together with the Spring Valley NAACP.

Oscar Cohen, chair of the Spring Valley NAACP’s education committee, said Uri L’Tzedek’s participation could be a turning point in a campaign that so far has been largely ignored in Albany.

“As concerned Jewish citizens,” Uri L’Tzedek’s petition reads, “we appeal to you to respond to the brewing crisis in Rockland County. Efforts to improve the situation from local politicians have not been successful, and now the children of East Ramapo are suffering with school closures, class cancellations, activity cancellations, high teacher-to-student ratios, and much more with no relief in sight. That is why we are calling for your direct and immediate involvement.”

The petition also asks the state to look into revising “the structure, governance and financing” of East Ramapo and “similar school districts, in order to ensure that public school students have access to basic educational opportunities and resources as stipulated in New York State’s Constitution.”

After meeting with a principal and students in the district, officials at Uri L’Tzedek’s decided that despite any flack they may get from Orthodox groups, the organization needed to take a stand.

“Classes are being cut in the middle of the year, teachers are being fired in the middle of the year,” Rabbi Hart said. “I met with a young African-American woman who was hoping to go to college. She was on the volleyball team, but all equipment was in tatters, and then the junior varsity team was cut,” he said. “The computer club was cut, clubs, extracurricular, classes. It’s very demoralizing, very dispiriting and it makes people angry.

“It’s a pattern of years of neglecting the broader community,” he said. “But there’s been no Jewish voice that has said: This is not OK.”

The petition also cites an “alarming” increase of “anti-Semitic incidents and sentiment” in the area, which it says stems from “misunderstanding and anger at the situation.”

“As Jews, we cannot stand idly by while children suffer and while anti-Semitic tensions rise. Especially when our Jewish community, with a supermajority of the school board, is so deeply involved in this matter,” the petition reads.

East Ramapo Superintendent Joel M. Klein doesn’t contest the program cuts but says the reductions were due to $10 million in cuts of state funding and $960,000 in cuts of federal funding due to the 2013 automatic spending cuts, mandated by Congress, called sequestration.

“When you lose $10 million on a $200 million budget, you have to make cuts. One year it’s arts and music, the next year it’s full-day kindergarten. We had to cut over 400 staff positions,” he said.

“No matter who was on the board, they would have made the same decisions,” he added.

The East Ramapo Central School District includes the haredi enclaves of Monsey, Spring Valley and New Square. The nine-member school board has seven fervently Orthodox members overseeing a district of about 9,000 public school students, about 90 percent of whom are black or Latino and two-thirds of whom qualify for free or reduced lunch. The district also has roughly 20,000 yeshiva students.

The East Ramapo school board is under investigation for fiscal irregularities, including diverting public funds to private yeshivas. In 2010, the board’s sale of a public school building to a yeshiva was annulled by the state for being millions of dollars under market value.

In addition, the state Education Department said it violated the Individuals with Disabilities Education Act by paying for special needs students to go to yeshivas without demonstrating why they couldn’t be served in public schools. The board has also spent millions on legal fees to fight several lawsuits including one charging it with using taxpayer money to subsidize religious education in yeshivas.

Klein said the board wasn’t aware that the 2010 sale price was below market and denied that the district ever paid for special-needs students to go to yeshivas.

“We are not sending one child to a yeshiva, not a single one,” Klein said. “If they cannot be served in a public school, they’re put in a BOCES [state] program or another approved school.”

The budget gap could be addressed if 60 percent of district voters agreed to override the state-mandated 2 percent cap on school tax increases, but Klein said that would never happen.

“We’re lucky to pass the budget, let alone pass an override,” he said pointing out that only 12 districts statewide managed to get an override passed.

“Another [non-Orthodox] board may have gone out and tried the 60 percent, but they wouldn’t have succeeded,” he said.

Rabbi Hart said he could identify with the desire of yeshiva parents to keep school taxes low.

“I’m a day school graduate and a future day school parent and I know what it’s like to pay day school tuition and taxes at the same time,” said Rabbi Hart. “That issue needs to be addressed. But Jewish law says we need to address these issues constructively not oppositionally.

“We’re going to get tremendous pushback for this, there’s no doubt,” he added. “But we cannot remain silent.”