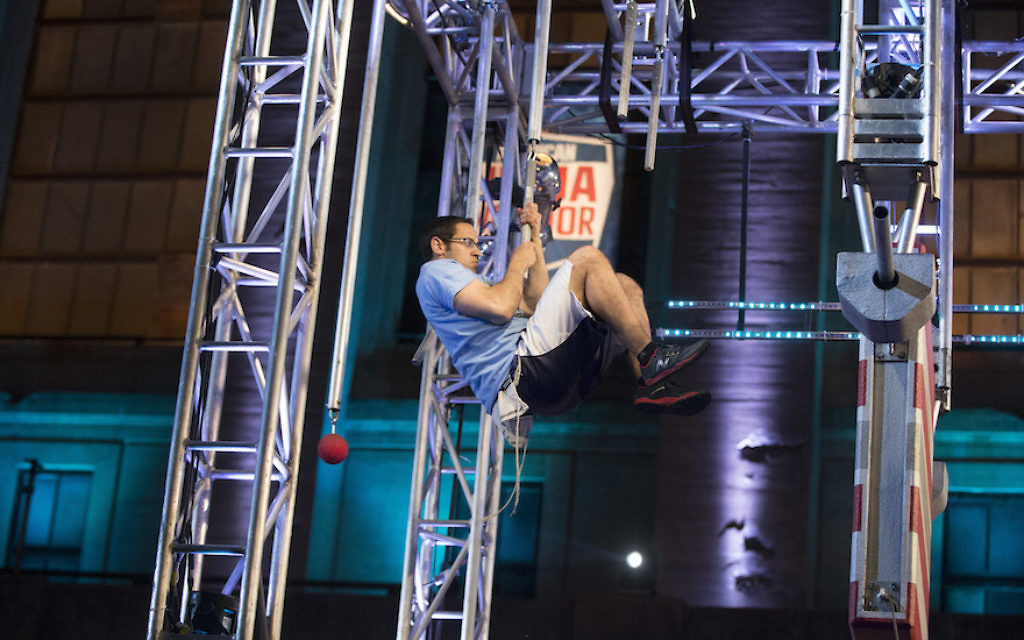 On Monday night’s episode of “American Ninja Warrior,” Orthodox rabbinical student Akiva Neuman competed with his yarmulke, tzizit and a T-shirt that showed a muscular rabbi lifting a Torah over his head.

“Usually ‘rabbi’ goes along with ‘pot belly,’ so I’m gonna try and change that,” Neuman, a resident of the Queens borough of New York City who is in rabbinical school at Yeshiva University, told NBC’s cameras.

Neuman — who competed to chants of “rabbi, rabbi” — made an impressive run on the challenging course. He struggled on the rope, the second obstacle, early on but bounced back. Ultimately, Neuman’s upper body strength failed him, as he slipped off what looked like a punching bag into the water below.

Neuman didn’t make it to the next level of the competition, which would have required some last-minute planning and potentially some special scheduling — it was set to take place on a Friday night, coinciding with Shabbat.

Still, the 25-year-old remained confident and smiling throughout.

“The commentators nicknamed me the ‘Rookie Rabbi’ because most people come back and compete a few times,” he said.

While Neuman doesn’t plan to increase the number of hours he works out — after all, getting his ordination and studying taxation at St. John’s University, as well as having a job (youth director at the Young Israel of Holliswood) and new baby do get in the way of workouts sometimes — he is going to focus on building his upper body strength.

“Next time you see a rabbi walking in the street, don’t just think, ‘He can’t do any of that,'” Neuman told the “Ninja” cameras. “Maybe he’s gonna be the next ‘Ninja Warrior.'”

And while he may have cited Maimonides in his prior interview with JTA, this time he drew upon the wisdom of a different sort of man, one famous for his brawn: Arnold Schwarzenegger.