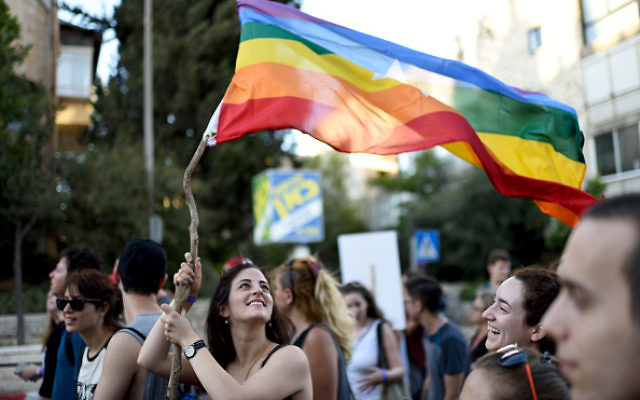 “I’m totally sympathetic to the plight of Orthodox homosexuals. I’m sensitive to their struggle and their pain, I just don’t understand what pride there can be in an action that is, after all, against Torah law. And I certainly don’t see how a rabbinic educator in an Orthodox school can take part in a parade that grants legitimacy to such an act!”

Of course, there are many less polite responses I could have received upon taking part in the “Jerusalemites Marching with Pride” campaign, but there is little to be gained from engaging with them. It is to the reasonable and moderate sentiments above that I dedicate the following thoughts. Because, to my mind, they reflect an extremely common, yet overly narrow perspective both of the significance of the gay pride parade, and the significance of “granting legitimacy.” Let’s take a careful look at them.

Firstly, it must be noted that the empathy expressed in the opening line reflects an important interpretive choice, which has become broadly accepted in the Modern Orthodox community. No one who chooses to understand the biblical term “to’evah,” an abomination, in its simplest sense could utter such words. People are generally neither sympathetic nor sensitive to people whom they see as committing genuinely abominable actions.

Rather, our interlocutor, and much of the Modern Orthodox community with him, prefers a softer interpretation, which is already found in the Talmud, downgrading the prohibition from an abomination to a wayward act – “you have gone astray with it.” This downgrade opens up the doors of empathy, allowing for the “sin not the sinner” attitude towards homosexuality, which is prevalent, and perhaps even dominant, in the Modern Orthodox community, though its implications have not been fully realized.

“Pride is the positive, proactive answer to a society that still breeds hate and fear towards members of the LGBTQ community.”

But ironically, this narrowing of the concern about homosexuality to a forbidden sex act, a positive development, tends to translate into thinking about the pride parade in similarly narrow, and therefore negative, terms. In Orthodox writing about the parade, it is primarily seen as a statement about the legitimacy of homosexual sex. “Do violators of the Shabbat need a parade? Do pork-eaters need a parade? How can you be proud of violating the Torah?”

Let’s respond bluntly. Folks. It’s not about the sex. The LGBTQ community does not parade in order to advocate for their right to engage in same-sex relations. That right has existed in Israel de facto since 1963, and de jure since 1988.

The pride parade is about advocating for what the LGBTQ community still lacks in society- equal treatment as human beings, the end to discrimination, bullying, abuse, and equal rights before the (secular) law on issues like marriage, status, and adoption. Pride is the positive, proactive answer to a society that still breeds hate and fear towards members of the LGBTQ community, a society in which “homo” is still the most common, and most terrifying curse in high school corridors. The parade aims its message at the world, but perhaps even more so, at the many, many people who feel threatened, intimidated, isolated, and depressed because of their sexual identity and orientation.

But, our interlocutor will angrily object, you can’t split hairs like that! It’s very nice to take a stand against homophobia and discrimination. No one will argue with that. But your attendance at the parade grants legitimacy to the agenda as a whole, which includes homosexual sex, which is against the Torah.

“Far from contradicting Torah laws, the main focus of the parade embodies the central Torah ethic of special concern for the marginalized and the vulnerable in society.”

And here is the second way in which this Orthodox response is insufficiently broad in its perspective. The question of granting legitimacy is perhaps the greatest bogeyman of Orthodox public policy in the last century. It is unleashed to counter cooperation or even dialogue with other denominations, with secularists, with feminists, and any other group of “undesirables”.

But it should not be allowed, as it often is, to exist in a vacuum, scaring away all careful thinking by virtue of its appearance. We should ask: What are we granting legitimacy to? In the eyes of what audience? What will happen by virtue of that legitimacy? And what weight do we give that fear in relation to other considerations?

As I argued above, if attendance at the parade is seen as supporting an entire agenda, the core of that agenda is directed against hatred and discrimination. Far from contradicting Torah laws, the main focus of the parade embodies the central Torah ethic of special concern for the marginalized and the vulnerable in society, as well as the commandments to “Love your neighbor as yourself” and “Do not stand idly by the blood of your neighbor.”

These are values and commandments which, sadly, are not given the halachic weight they deserve by the Orthodox community. Consequently, they are not viewed from the outside as ideas that Orthodox Judaism take seriously. Most tragically, marginalized and vulnerable people do not experience these values as ones about which Orthodox Judaism genuinely cares. If I were to let my concern for legitimating a prohibited sex act outweigh my concern for the suffering of the marginalized, what statement of priorities would I be making?

My attendance at the parade is thus an attempt to grant the Torah’s ethical values a legitimacy they sorely lack. And that’s a statement I’m proud to stand behind, and for which I’m proud to march.

Rabbi Avidan Freedman received his MA in Jewish Education from the Azrieli Graduate School, and rabbinical ordination from YCT Rabbinical School and the Israeli Chief Rabbinate. He lives in Efrat with his wife and 4 children, and teaches in both Orthodox and pluralistic programs at the Shalom Hartman Institute in Jerusalem.