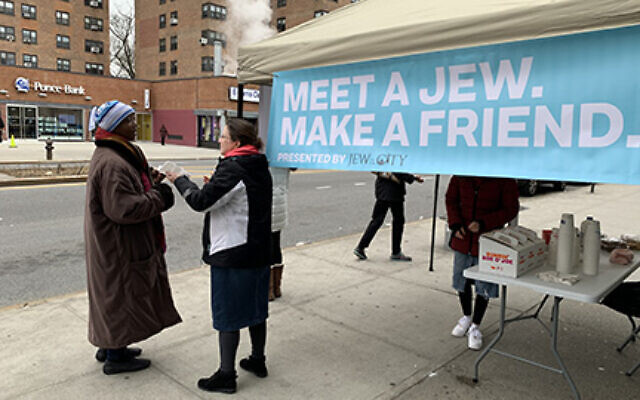 The organization Jew in the City set up shop on East 106th Street Monday. “When you meet everyday people, I think that’s where the shared commonalities come out,” says the group’s leader, Allison Josephs. Shira Hanau/JW

On a gray Monday morning, Allison Josephs stood outside a tent on the corner of 106th Street and Third Avenue in East Harlem hawking coffee and rugelach. She wasn’t looking for signatures on a petition or looking to sell anything. She was just trying to introduce herself to her fellow New Yorkers, as an Orthodox Jew.

“When you meet everyday people, I think that’s where the shared commonalities come out,” said Josephs during a lull in the foot traffic.

After the recent wave of anti-Semitic attacks on Orthodox Jews in Brooklyn and the deadly attacks in suburban Monsey and in Jersey City, Josephs wanted to do something. So she came to this street corner in Harlem, an area with few Jewish residents, to stand with several other women in wigs, customary for married Orthodox women, and men in yarmulkes and engage non-Jewish New Yorkers in conversation. 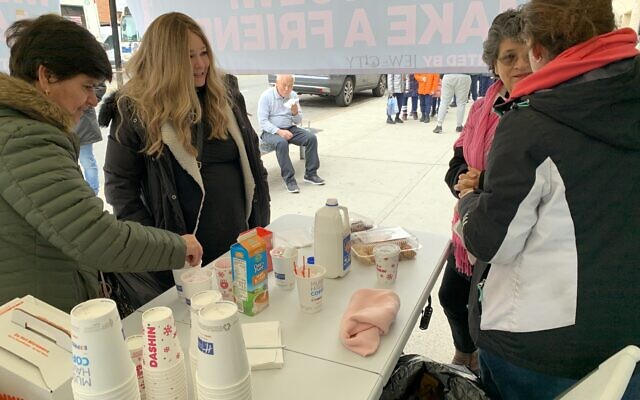 A pop up test in Harlem encouraged passersby to stop and have a coffee and conversation with a Jew. Shira Hanau/JW

“This is where the Monsey attacker was found after the attack,” said Josephs, referring to Harlem generally. (The alleged perpetrator, Grafton Thomas, was arrested in West Harlem.) “So there’s some symbolism here.”

Josephs is the founder of Jew in the City, an organization dedicated to reversing negative stereotypes about Orthodox Jews. Banners hung from the tent that read “Meet A Jew, Make A Friend.” A sign next to it explained the different groups that make up Orthodox Jews, delineating the differences between Modern Orthodox, yeshivishe and chasidic Jews.

Neighborhood residents passed by, some stopping for a cup of Dunkin’ Donuts coffee, though several seemed confused as to why there were no actual donuts. Tzirel, a student at Brooklyn College who volunteered to help with the pop-up, confirmed to an older woman that the rugelach on the table were, in fact, non-dairy. “We call it pareve,” she said, using the Yiddish word for food with no meat or dairy. 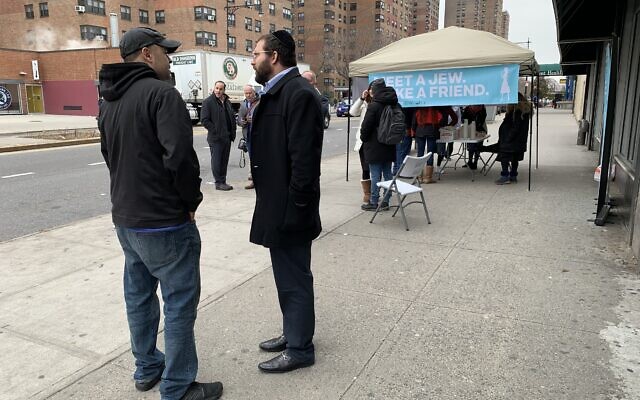 The “Meet A Jew” tent was organized by Jew In The City to encourage conversation between different cultures. Shira Hanau/JW

A Muslim woman in a head scarf stopped to talk to Tzirel over a cup of coffee. Soon they were bonding over the strictures of both religions, swapping tidbits about head scarves and at what age Muslim and Jewish children begin observing religious fast days.

“I think there have been a lot of misconceptions about different groups. We wanted to come to a different community and show them our face, show them we’re human,” said Tzirel. “We’re all human beings trying to do our best in the world.”