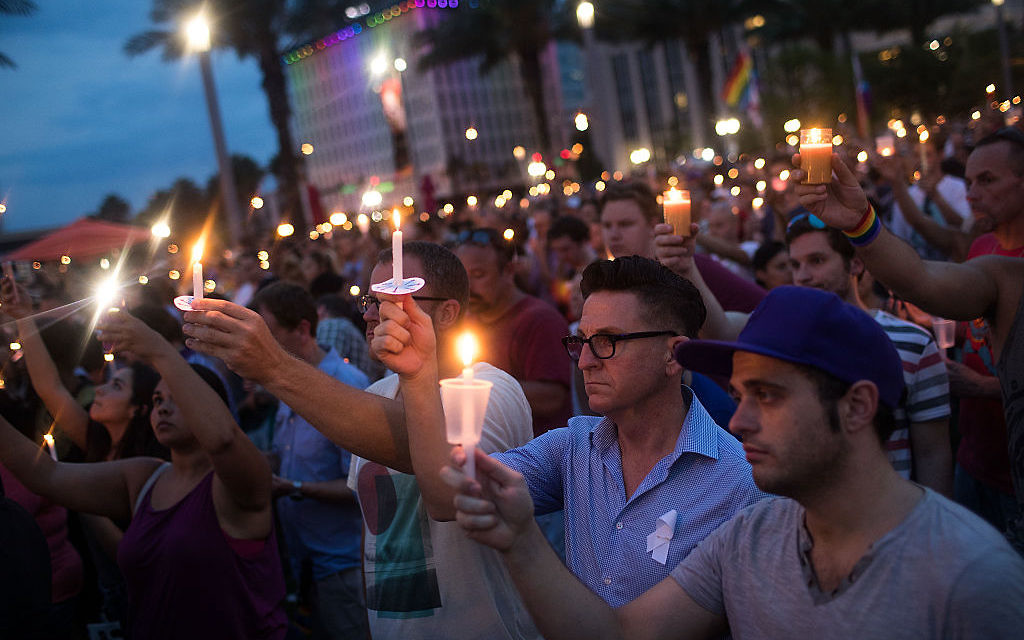 Jewish groups in Orlando responded to the mass shooting attack at the Pulse nightclub with messages of sadness and sympathy, and calls to action.

“The Jewish community has been impacted many times by terror attacks, and we stand united in denouncing all violence. We are in close touch with local, federal and state authorities, and we have full faith and confidence in our law enforcement,” said a statement released by the Jewish Federation of Greater Orlando. “At this time we have not been notified of any threats to the Greater Orlando Jewish community. However, in the aftermath of Sunday’s attack we ask that you remain vigilant and alert authorities immediately about any suspicious activity you witness.”

The statement signed by Rhonda Forest, chair of the Board, and Olga Yorish, executive director, extended condolences to all those in the Greater Orlando community affected by the act of terror. It ended by encouraging members of the Jewish community: “If you see something, say something.”

At least 49 people are dead after Omar Mateen, 29, an American-born citizen living in Fort Pierce, Fla., whose parents are from Afghanistan, entered the Pulse nightclub armed with an assault rifle and a handgun after 2 a.m. on Sunday and opened fire. Mateen called 911 and pledged allegiance to the Islamic State shortly after the start of the attack.

The Rosen Jewish Community Center’s message extended sympathies to those affected by Sunday morning’s “horrific terror attack at the Pulse nightclub in Orlando. “

The message read: “We pray for the victims, their families and loved ones.”

The message said the JCC is working with the Southwest Orlando Jewish Congregation to organize a community prayer vigil for later this week.

“The Jewish community has been impacted many times by terror attacks, and we stand united in denouncing all violence,” said the message signed by JCC President Jeff Imber and Executive Director Bonnie Rayman. “In the aftermath of Sunday’s attack we ask that you remain vigilant and alert authorities immediately about any suspicious activity you witness.”

The message on the Congregation of Reform Judaism in Orlando Facebook page signed by the congregation’s clergy, professional staff and board president expressed sympathy: “Orlando – The City Beautiful – has always had the reputation as one of the most welcoming and hospitable cities in the world. Its diversity and sense of hachnasat orchim (welcoming the stranger) are legendary. It is the city where hopes are built and dreams are made.

“The tragedy that unfolded at 2:00 a.m. this morning at The Pulse Nightclub in Downtown Orlando has rocked the entire community to its core, and we at Congregation of Reform Judaism, stand in solidarity with all our brothers and sisters in the fight against hatred and terror wherever it occurs.”

The message continued: “Today our hearts are torn for those whose lives were cut short too soon, for their families, for those wounded in the attack and for yet another horrific, senseless tragedy that attempts to rip the very fabric of our society and the importance of chesed (loving kindness).”

The University of Central Florida Hillel Facebook page reminded its followers that the attack took place in a nightclub, and called for the whole community to keep on dancing in support of the victims.

“As a community, we are still reeling from the brutal mass murder of Israeli’s at Sarona in Tel Aviv earlier this week by Palestinian terrorists. Terrorism, whether foreign or domestic is still terrorism and we must stand steadfast, shoulder to shoulder with its victims just as we stand resolutely against its perpetrators,” read the message.

“In this case, as with the case in the Dolphinarium night club in Tel Aviv when Palestinian terrorists brutally murdered nearly two dozen youth in a night club, the mantra came out ( and quickly became a hit song): “don’t stop dancing!”

“The answer to this sickening terrorist attack at the Pulse is thus to quickly clean up the place and hold an even bigger dance party where the whole community (gay, allies or otherwise) comes together to say to the haters ‘we won’t stop dancing.'”

A later post by Hillel encouraged people to donate blood to help the victims.

Early Sunday morning the Miami-based Consul General of Israel to Florida and Puerto Rico in a post on Facebook sent “condolences to the ‪#‎Orlando community that has been affected by the tragic mass shooting. We stand in solidarity with the Florida LBGT community against this terror attack.”