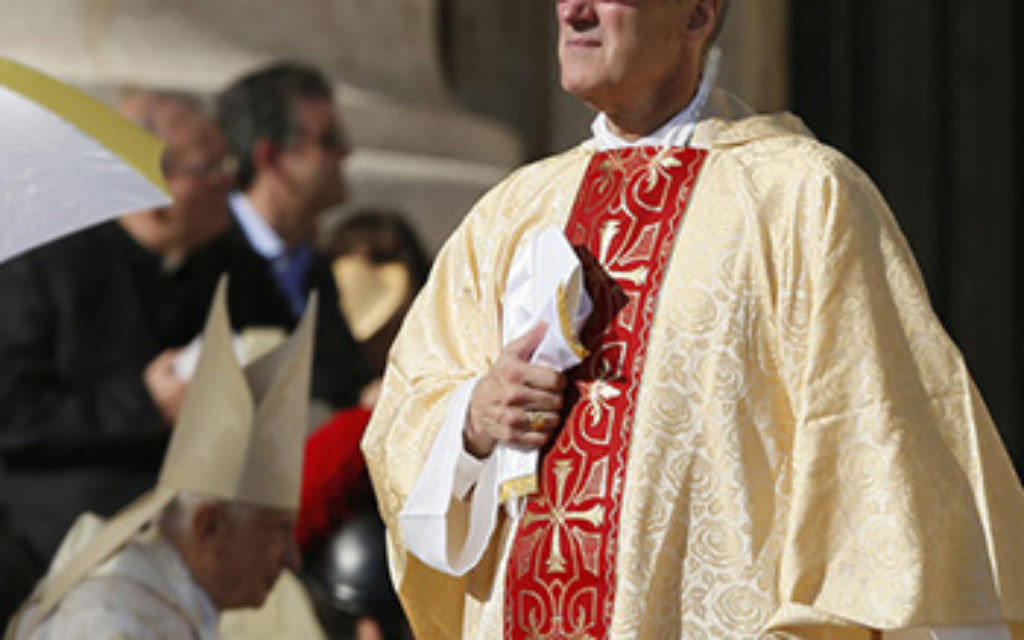 The most controversial proposal floated so far at the high-level, high-stakes Vatican summit on church teachings on the family had nothing to do with gays or divorce, but instead ordaining women — not as priests, but as deacons.

Still, even that suggestion — made by a Canadian archbishop on Tuesday (Oct. 6), near the start of the closely watched, three-week synod called by Pope Francis — was considered eye-popping.

That’s because if the trial balloon floated by Quebec Archbishop Paul-Andre Durocher flies, it would represent a historic breakthrough for the Catholic Church, and Catholic women, by giving them access to the kinds of offices that only priests and bishops can hold.

“The only way a woman can fully ‘obtain’ many church offices is by ordination — by becoming a cleric — and the ordinary way to enter the clerical state is by ordination to the diaconate,” said Phyllis Zagano, a leading expert on women deacons and a researcher at Hofstra University in New York.

Moreover, as Zagano noted in an email, women deacons could perform functions that male deacons currently do: preaching, baptizing, witnessing marriages and performing funerals. Celebrating Mass, hearing confessions and anointing the sick would remain the province of the male priesthood.

Durocher, archbishop of Gatineau and until recently president of the Canadian Conference of Catholic Bishops, made his proposal in the three-minute window that each of the 270 bishops at the synod is allotted to lay out concerns and priorities for the church and the modern family.

Durocher focused on the role of women, first lamenting that “sad and dramatic reality” that women “continue to suffer discrimination and violence at the hands of men, including their spouses.”

He asked Francis and the bishops to state clearly that there is no scriptural justification for such bias, and in particular that passages in which the Apostle Paul speaks about wives submitting to their husbands “can never justify the domination of men over women, much less violence.”

He then asked that the synod recognize that women can be given “decision-making” posts in the church, and in the Roman Curia, the papal bureaucracy.

Finally, he said the synod should establish a process for opening the diaconate to women — a suggestion that quickly drew praise from church reformers and negative reactions from conservatives.

“If you’ve opened the diaconate to women, you are opening up the door to female priests,” Chad Pecknold, a theologian at Catholic University of America, told The Washington Post.

Durocher anticipated that criticism, telling Catholic News Service that “the diaconate in the church’s tradition has been defined as not being ordered toward priesthood but toward ministry.”

In fact, Jesus’ Apostles established the order of deacons mainly to carry out the charitable mission of the church. In the Catholic tradition, the role was eventually subsumed into the priesthood, until the Second Vatican Council of the 1960s revived it as an ordained order open to “mature married men” over 35.

(Deacons can also wear a clerical collar, which sometimes leads them to be taken for priests.)

The restoration of the diaconate quickly raised the question of whether women could also become deacons, since a woman named Phoebe is called a deacon in the New Testament Book of Romans.

Zagano, author of “Holy Saturday: An Argument for the Restoration of the Female Diaconate in the Catholic Church,” said other sources show that the Western church continued to ordain women as deacons up to the 12th century, and some Eastern tradition churches still do.

“There is no doctrine against women deacons,” she told the Pray Tell blog.

Though the Vatican never definitively ruled out women deacons, Rome and conservative theologians have tried to dismiss the idea as unjustified — an “amusing anachronism,” as Cardinal Gerhard Mueller, now chief Vatican doctrinal official, once put it — and theologically dangerous. The issue was raised at a 1987 Vatican synod but went nowhere.

In 2001, when some German and Austrian dioceses set up classes that could be viewed as training women for the diaconate, the Vatican ordered them shut down because the church “does not foresee the possibility” of ordaining women deacons. Others have continued to argue that it cannot happen.

But at the same time, other experts and some churchmen continued to quietly lobby for a reconsideration.

Zagano said she has had “serious” private discussions with bishops and cardinals in recent years about ordaining women deacons, and the late Cardinal Francis George of Chicago — known as an orthodox churchman — pushed the idea with Rome and acknowledged in 2012 that it “is being talked about very slowly.”

How that might play out is a matter of much debate. Some say that women deacons could be allowed, just as altar girls were introduced a few decades ago, but individual bishops would have discretion over whether to ordain women.

Zagano said the “Kasper Proposal” would be “a disaster” because it would bolster the argument of opponents of any form of ordination that women cannot be viewed as the image of Christ, as men can. “To say women cannot be ordained is to say they are somehow less than human,” she said.

The voice that counts, of course, is that of the pope.

Durocher appears to be the only one who has raised the issue at the synod, which may not take up his call. But Francis could. Will he?

The pope has regularly called for a deeper “theology of women,” though he hasn’t explained what he means by that. And some of his pronouncements about women sound like they come from the mouth of the 78-year-old Latin American celibate cleric that he is.

Francis has also called for giving women a higher profile in the church and the Curia but he has not yet done so, and he has warned against “clericalizing” women by exalting them as church functionaries rather than as mothers and as nourishing spiritual figures like the Virgin Mary.

He has also taken the idea of ordaining women as priests off the table. “This cannot be done,” he said on the flight back from his recent U.S. trip.

On the other hand, Francis is a pragmatist, and he noted in a talk to bishops on the last day of his visit that when the Apostles realized they couldn’t take care of the needs of all the widows and orphans, the Holy Spirit inspired them and “they got together and came up with deacons.”

Perhaps the pontiff will feel that same inspiration, this time blowing toward women deacons.