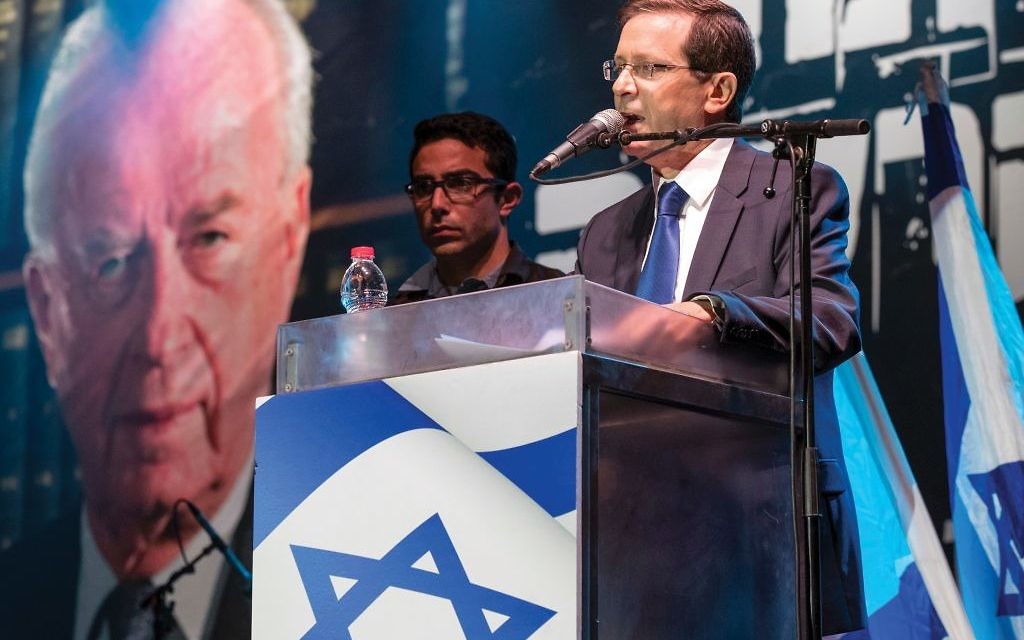 “Bibi go home,” yelled the crowd last Saturday night. America was still in election mode, but it was a normal day here in Israel — and it’s hard to remember a time outside of polling season when so much anger towards the government was felt in a single place.

The stakes were raised high. This wasn’t just an event decrying government policies, but one claiming that the government is taking Israel down a perilous path. “The Fight Against Incitement and Hatred,” was how the rally was billed.

Israel today is reminiscent of Israel in the months before Prime Minister Yitzchak Rabin was assassinated, Herzog claimed. Political hatred has “reared its head” and incitement is “here once again,” he declared. This was political dynamite. The gathering was the annual commemoration for Rabin, held for his yahrtzeit, and Herzog’s Zionist Union party had scored a coup getting this prime-time exposure in Rabin Square. The group that normally runs the event as a unifying left-right occasion ran out of money, and the Zionist Union stepped in to pick up the check and run the event.

Herzog recalled the incitement that preceded the Rabin assassination and thundered: “The hatred is the same hatred; the incitement is the same incitement, and the leader is the same leader.” He was referring to Netanyahu, who was leader of Likud at the time of Netanyahu’s murder, and was widely criticized for not acting to stop the anti-Rabin incitement.

Tzipi Livni, senior member of Herzog’s party, decried the atmosphere she believes the government is setting today and said that the crowd was gathered “to prevent the next political murder.” She was sharing her concerns about the direction that Israeli politics is taking, and also offering a comeback to the government’s chief whip. David Bitan claimed before the rally that the Rabin’s killing was “not a political murder” — downplaying the background of extreme political statements about Rabin and calling the murder an act of “one individual.”

For a political opposition that has been lackluster for the year-and-a-half since the general election, it was all unexpectedly feisty. As the opposition party, the Zionist Union has lacked gravitas. In public exposure it has often been outdone by the smaller Yesh Atid party, and on geopolitical issues, former military and security figures have become, in a sense, the real political opposition. Like the message of the rally or loathe it, there was something reassuring in seeing that the formal political opposition had suddenly come to life.

But was it the right decision for the nation?

Over the last few years, the Rabin commemoration in Rabin Square has become more and more inclusive. One of the memorable moments was when a settler leader went into what he may have perceived as the lion’s den and took to the stage. When Avi Gisser, rabbi of the Ofra settlement, first took the stage at the 2012 commemoration, he was met with boos. But the crowd quickly realized that Gisser’s message that Israelis should unite around democratic values and commitment to nonviolence resonated for everyone, and that his presence at the podium showed that the lesson of Rabin’s murder resonates on both left and right.

The crowd, as well as the lineup of speakers, was changing: 2012 was the first year when the right-leaning religious youth movement Bnei Akiva officially attended, causing the heartwarming sight of its members standing alongside students from left-wing youth movements and jointly showing support for a shared vision of citizenship.

Increasingly the rally has been seen as the legacy of Israelis across a wide ideological range all helping to promote this perception of the yahrzeit. Last year, Reuven Rivlin, Israel’s president, veteran of the Likud party and peace process skeptic, addressed the crowd. “Dear friends, you who stand before me, young men and women, youth movement leaders and members, from the right and left, ultra-Orthodox, religious, secular, Jews and Arabs – young leaders, the best and brightest of our land,” he said. “The fact that we are all standing here this evening, together by your initiative, is your victory, and it is our victory.”

He who pays the piper calls the tune, and the Zionist Union rescued the Rabin Square event this year, stepping in with its checkbook and its agenda. It was within its rights to turn the event into a political rally, but it came as a cost, undoing some of the hard work that has made a broad spectrum of Israelis feel like they have a stake in the annual commemoration. It’s ironic that the speakers lambasted what they see as the growth of “incitement and hatred” from the right, while changing a key annual event that gave the right a reason to stand up next to the left against these ills.

The Zionist Union should have saved the Rabin rally, and then told the whole nation that it could come to the kind of unifying event it has been accustomed to. There are plenty of other days in the calendar for political point-scoring.

But wasn’t the political rally too good an opportunity to miss for the party? In a country plagued by sectarian politics, where too many legislators see it as their job to look after the voters who supported them and not the rest, where the distribution of state budgets can depend on which communities have the best political representation, I would reach the opposite conclusion. Any opposition party that shows it can pass over an opportunity for sectarian gains in the name of the national good would be nicely displaying its aptitude for leading the country.