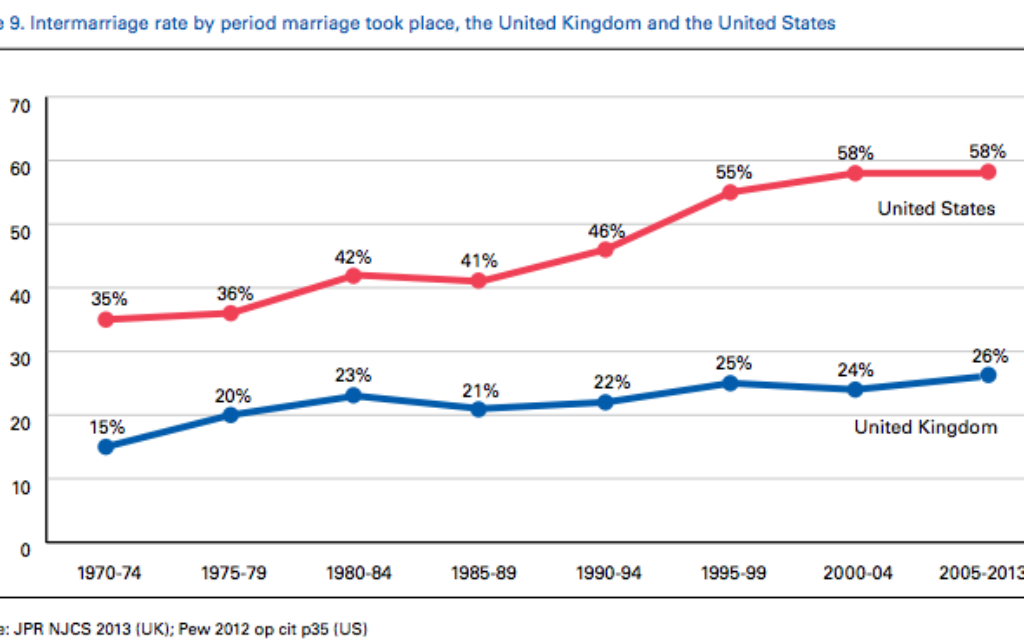 According to the London-based Institute for Jewish Policy Research (JPR), intermarriage in the U.K. since 1980 has risen by a few points to 26 percent. The intermarriage rate in the U.S. is 58 percent.

“The common argument says, ‘if you have more Jews in a community then the rate of intermarriage should be lower’ but that isn’t the case,” said Sergio Della Pergola, a leading expert in global Jewish demographics at Hebrew University. He pointed out that the estimated Jewish population of the U.K., about 280,000, is equivalent to Philadelphia’s, about 1/20th of the Jewish population in the U.S.

The report also found that in almost all cases of in-married Jewish couples, children are raised as Jews, while this is the case for less than a third of intermarried households.

Della Pergola said the U.K. “has a much more compact and conservative community than the U.S.” A 2013 Pew Research study showed that only ten percent of American Jews identify as Orthodox, while a study by JPR put the figure of Jews who belong to Orthodox synagogues in the U.K. at 65 percent. This is crucial, he said, because “the rate of intermarriage is highly differential in different circles of the Jewish population; almost non-existent among the Orthodox, and much more common among secular, Reform or Conservative communities.”

Gadi Luzzatto Voghera, director of the Center of Contemporary Jewish Documentation in Milan, said Jewish communities in Europe, in an effort to lower the intermarriage rate, have begun a series of social activities and educational events designed to help create ties between young Jews on both a national and a continental level. Della Pergola similarly highlighted “Jewish education, policies for Jewish youth, and investment in Jewish youth” as some of the key instruments in attempting to reverse this trend. The slowdown in the rise in intermarriage rates may well have been influenced by the proliferation of such programs in recent decades.