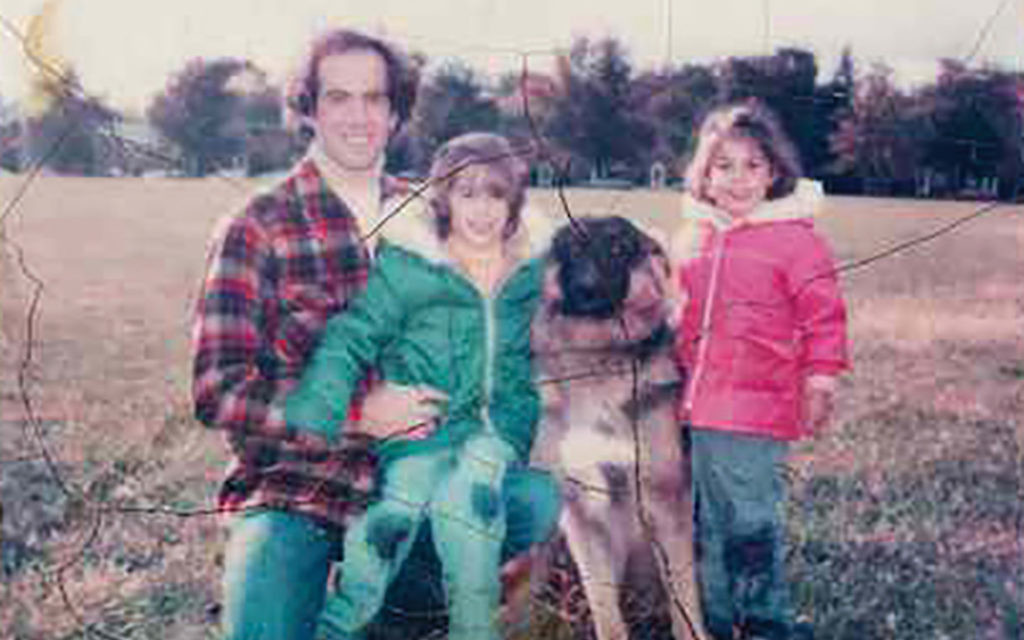 Joselin Linder, right, as a child with her father, who died at 49, sister and the family dog. Courtesy of Joselin Linder.

Joselin Linder’s late father was a family doctor in Columbus, Ohio, the kind of doctor who gave his home phone number to patients and didn’t mind when they called. More than one patient named a newborn child after him.

When Linder was in high school, her athletic father let her know that he was very sick, and when she asked what was wrong, he said, “I don’t know.” And he didn’t. He died in 1996, when he was 49 and she was 21.

A few years later, she began noticing her own medical issues, beginning with inexplicable swelling of her ankles and deposits of fluid that she discovered were related to a severe liver blockage and the looming possibility of internal bleeding. No one could explain the cause.

She unravels her own medical mystery, which connects to her father’s illness, and a “genetic mistake” unique to her family in a new book, “The Family Gene: A Mission to Turn My Deadly Inheritance into a Hopeful Future” (Ecco). The condition and gene she carries — a rare mutation on the X chromosome — are not yet named, although they have been studied for more than 10 years at Harvard Medical School. 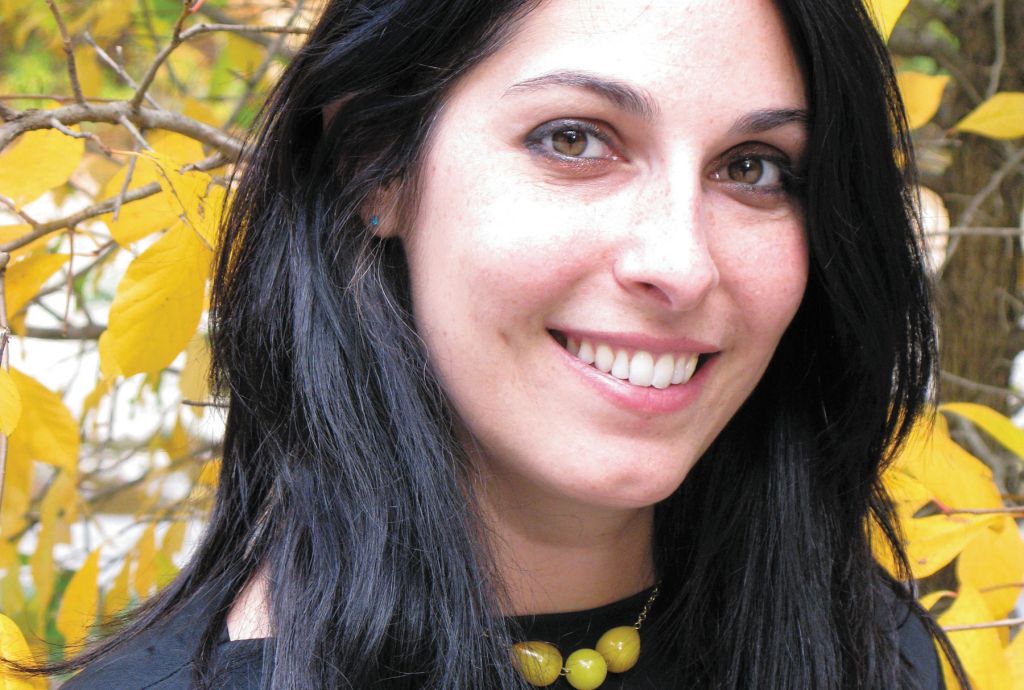 Linder’s story is heartbreaking in many ways, yet her voice is full of energy, gratitude and hope. Joselin Linder

The book is a loving family memoir in which she makes complex, cutting-edge science accessible. The story is heartbreaking in many ways, yet Linder’s voice is full of energy, gratitude, candor, hope, too, and sometimes humor, all of which makes for compelling reading.

“My biggest hope,” Linder, who is 42, says, “is that we’ll find the answer and maybe even a cure. My second hope is that it piques people’s interest in genetics and genomics.

She explains that the disease is a genetic variant, called a private mutation when it is found in a group of related individuals. Over time, it can expand into something called “a founder population,” a group of distantly related people exhibiting the symptoms. When she began putting together the pieces of her family’s medical puzzle, Linder learned that it began with her great-great grandmother, who died at 80. Her great-grandmother died of it in 1955 at age 55, and an uncle died in 1961 at 34. 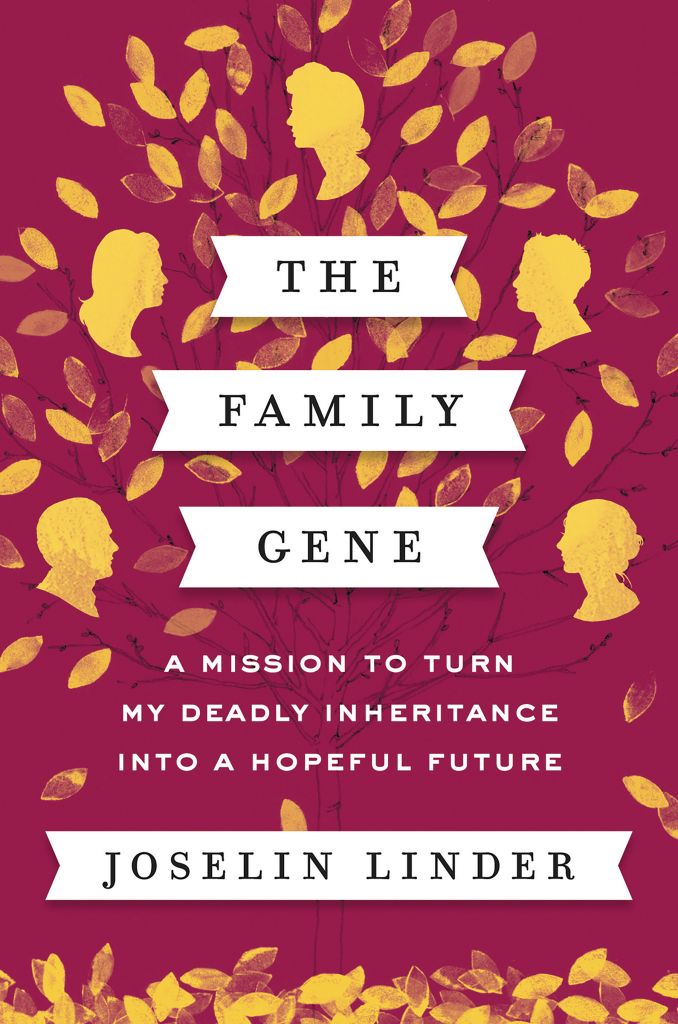 Since the family faced many tragedies — terrible car accidents, early deaths — Linder says they were “like the Kennedys” and didn’t suspect anything more than bad luck. Genetic diseases with adult onset like this are very rare, Linder explains, but they are the ones that predispose people to facing grave symptoms later in life.

In researching the book, Linder consulted with researchers and studied her family members’ stories and medical charts. It was most difficult for her to look closely at her father’s records, and her older sister helped with that. Both sisters have the rare mutation. The condition affects the portal vein in the liver, leading to an inability to digest protein and possible starvation.

The family was fortunate in having the interest and dedicated research of Dr. Christine Seidman (known as Dr. Kricket), a cardiologist and geneticist who runs the Seidman Lab at Harvard Medical School. Seidman, who was able to confirm that 14 relatives (five have died) carried a private mutation also shared a large dose of empathy, encouraging Joselin and her sister that they have great potential to live long, healthy lives. The Lab’s work is still unpublished.

Linder is part of the fifth generation of carriers. So far no one in the sixth generation — more than 20 kids so far — is a carrier. She says that those who have it have been careful about testing, but there are still family members who are not yet married.

“I am overwhelmed by the miracle that allowed this sweet boy to have his grandfather’s name … but not the gene that killed him.”

“We have a definite attitude that we’ll do what we can to stop it,” she says. “I’ll continue to advocate.”

Her sister, who had been told she was a “ticking time bomb,” and her husband have children — a pair of twins. Since the gene has been mapped, they were able to use IVF and a process called “preimplantation genetic diagnosis.” The DNA of fertilized eggs can be read, and those embryos not compromised by the gene can be implanted.

The boy twin is named for Linder’s father. Linder writes, “I am overwhelmed by the miracle that allowed this sweet boy to have his grandfather’s name … but not the gene that killed him.”

Linder and her husband — who sounds like a wonderful and supportive man — have decided not to have children.

“My family has an opportunity to weed a deadly gene out of existence, to use the power of medicine to do something that humanity has never before been presented with the opportunity to do,” she writes, adding, “But nothing is certain.”

“My family has an opportunity to weed a deadly gene out of existence, to use the power of medicine to do something that humanity has never before been presented with the opportunity to do.”

Linder says that when her father was sick, she had no language to describe what was going on. People told her later that they suspected he had AIDS.

“He would love that his story is being set straight,” she says.

While she was growing up, it was Linder’s mother who insisted on Joselin and her sister going to services and Hebrew school at their Conservative synagogue, and accompanied them; Linder was president of United Synagogue Youth. Her father would only come to services on the holidays. But when he got sick, he became very close with their rabbi, who visited him every day. His Judaism “blossomed in his illness,” she says.

For her, the opposite happened. She explains that as her own illness progressed, she lost her Jewish identity. Recently though, on her book tour, she gave a sermon at their Ohio synagogue, and she again felt the warmth of community.

“It’s not gone forever,” she says, adding, “I like the idea of a God. It got very complicated in my 20s.” Now, she enjoys talking to the father of her best friend, who is a rabbi.

She says that not feeling sick is “one of luckiest things. It’s hard to be a crusader if you do feel sick.”

Linder, who lives in Fort Greene, is a comedy writer and has written a few books. A few years ago, when a friend in her writer’s group heard about what happened to her father, she suggested that Linder write a book about it, and at first, she didn’t think her life had much of a human-interest angle. But she then did a TEDxGowanus talk about her experience, and that led to the book.

Some relatives chose to remain private in Linder’s telling. Linder says, “I felt all along, the more attention we can get, the better chances that we can bring other doctors to our cause.”

In fact, since the book has come out, she has gotten a lot of responses, including a researcher with a lab at a major university who may be able to help, and a woman who has similar symptoms. She hopes to “help connect the dots for some other people.”

“Most of us don’t live lives that are conscious of our mortality.”

Linder is an optimist. Still, she worries about funding for research and about health insurance. Fearful of swelling, she pays attention to her health.

“Most of us don’t live lives that are conscious of our mortality,” she says. “We get up in the morning and go about our lives. My sister and I have been made more appreciative of our lives. We have lives that we like.

“I have an opportunity as a person with a rare disease to find answers for us and for others. I have the energy and motivation,” she says.