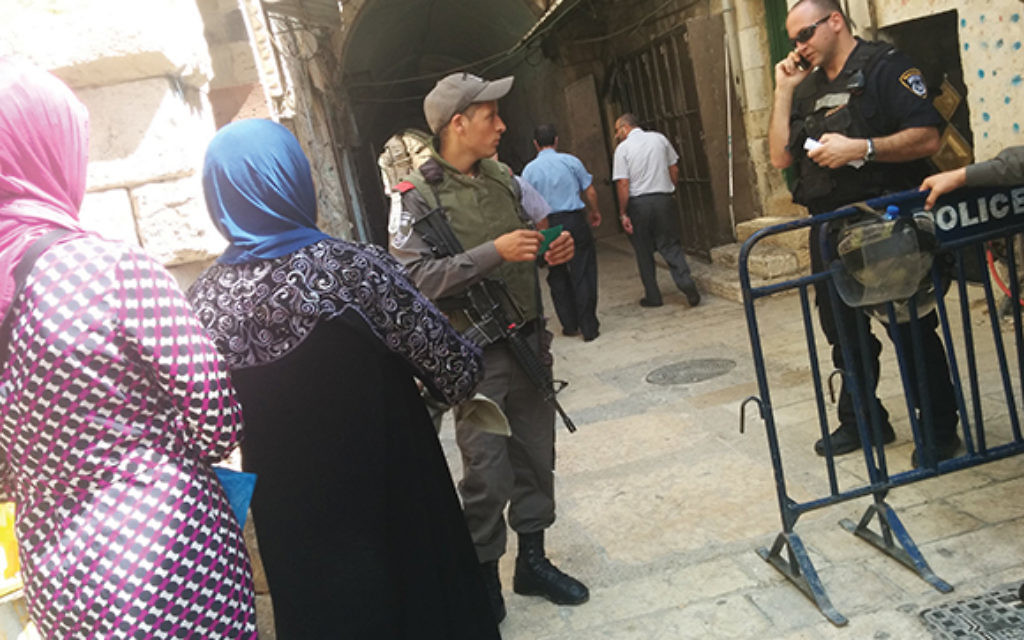 Jerusalem — Israeli and foreign tourist groups milled about the Western Wall plaza, taking advantage of a break in the late-summer heat one day before the start of Yom Kippur. For the unfamiliar, the plaza seemed sufficiently lively midway through the Jewish High Holiday season.

But the small detachments of policemen shuttling through the square loaded with tear gas canisters revealed the growing tensions and clashes that have seized the city in recent weeks.

Once again, a turf battle over the Temple Mount esplanade and its mosques is turning the Old City holy sites and east Jerusalem into a conflict zone between Israeli Jews and Palestinian Arabs. And it threatens to erupt into an international crisis and undermine ties between Israel and Jordan.

For all the buzz of visitors at the Western Wall plaza this week, tour guide Zvika Hai confided that the Jewish holy site was actually relatively empty because of the tension: “There’s no one here,” he said. “Normally it’s packed and there’s no room to move.”

Just a few steps away, an Israeli security guard who asked that we only use his first name, Mordechai, said extra forces had been deployed in and around the Old City to handle potential violence amid the Jewish holidays.

“You know what they say about quiet: it isn’t really quiet,” he said. “There’s rock throwing, stabbings and kidnappings. Worshippers are coming for penitence prayers, and we have to protect them.”

The spark of the latest round of conflict is a dispute over visitation rights at the holy site where the ancient Jewish temple once stood and whose Al-Aqsa Mosque is the third holiest site in Islam. Hard-line Jewish religious nationalists are visiting the Temple Mount in higher numbers to push Israel to assert more control over the site, while Prime Minister Benjamin Netanyahu’s government recently banned a group of Muslim female activists who heckle Jewish religious visitors outside the mosque. That prompted groups of Palestinian militants armed with explosives and rocks to use Al-Aqsa as the backdrop for clashes with Israeli police that have sparked rioting throughout the city.

Ever since, Israel’s government has been under pressure to get the disturbances under control: while Prime Minister Netanyahu has faced calls from politicians to crack down on rock-throwing minors, he’s taken flak from Jordan’s King Abdullah, who rejected Israeli moves to clear out the Palestinian hecklers to make way for Jewish worshippers.

In what seems like a replay of months of unrest that gripped Jerusalem last year, detachments of border police were patrolling the Old City market, which runs from the Nablus Gate to the main entrances to the Temple Mount for Muslims.

Not far from a barricade where police checked the IDs of Muslim pilgrims, a group of women dressed in traditional hijab robes and head scarves yelled “God is Great” at a group of religious Jews passing by.

“The Jews want to enter the Al-Aqsa mosque and put a temple over it,” said Huda Abu Sneineh, a 41-year-old mother of seven who sat outside the holy site on Monday after being banned for a month. “But they can’t. God is with us.”

Once again, the sides are seeking the quiet mediation of the United States, but so far the diplomacy has failed to ease the tension. On Monday evening, ahead of Yom Kippur, Israel banned Muslim men younger than 40 from visiting the Temple Mount, citing intelligence on planned disturbances.

While Israel is accusing the Muslim activists of arming themselves with explosives and charging the Palestinian Authority with incitement, King Abdullah and Muslim authorities see the new access limitations as a policy of “dilution” of their presence at the holy site and a violation of the religious status quo there. Analysts say that Israel’s police have been ordered to ensure visits to the Temple Mount even amid disturbances by Muslim activists.

Daniel Seidemann, an Israeli lawyer and expert on east Jerusalem, said that Israel’s government is enforcing a policy to use force against the Muslim rioters to keep the Temple Mount open for Jewish visitors — and that this new policy is actually fine with the shabiba — the Palestinian youths who say they are “defending” Al-Aqsa and get coverage on TV that looks like they are at war with Israel.

“The shabiba like it because it looks sexy on Al Jazeera,” Seidemann said.

Criticism of Israeli policy has been voiced by Jordan, Saudi Arabia and Turkey.

Temple Mount activists counter that Israel needs to do more to assert its sovereignty at the holy site and allow Jews to pray in the most revered spot in Judaism. Objections by the Palestinians should be ignored, they say.

Yoaz Hendel, a former adviser to Netanyahu, said it is Palestinians who have upset the status quo with increased incitement and increased attempts by the Palestinian Authority to extend its rule to Jerusalem.

“There’s an increasing campaign of Jews who ask themselves, how come in a liberal democracy there is no freedom of worship,” Hendel said.

But Shimon Shamir, a former Israeli ambassador to Jordan, said Israel’s government is provoking controversy by allowing visits considered a provocation, similar to Ariel Sharon’s infamous tour of the Temple Mount in September 2000, which helped spark a Palestinian uprising.

“There are people visiting the Temple Mount who are crazy and want to rebuild the Holy Temple,” Shamir told Israel Radio. “We control the Temple Mount, and every move we make has reverberations not only in the Arab world, but throughout Islamic world.”

The tensions have spiraled beyond the Old City, and reignited rock throwing through Palestinian neighborhoods in Jerusalem. Over the Rosh HaShanah holiday, a Jewish motorist died after a rock hit his car. Israel’s public security minister, Gilad Erdan, said judges should be promoted based on harsher sentences for rock throwers. Netanyahu responded by calling for the police to deploy snipers against rock throwers — stirring criticism from Israeli Attorney General Yehuda Weinstein.

Jerusalem Mayor Nir Barkat — who back in February declared that the city had gotten disturbances under control — said there’s a deliberate campaign of incitement of young rock throwers that targets the Jewish holidays. “No other country in the world would agree to have such violence and terror in its cities,” he said.

Residents of the Jewish neighborhoods in southern Jerusalem complain that in recent weeks, youths from the Arab village of Jabel Mukaber have been throwing Molotov cocktails at them.

“We live on the line” between Arab and Jewish Jerusalem, said Mitchell Barak, a pollster and Jerusalem resident. Parents who send their kids to a school near the neighborhood are on edge, he said. But as long as there’s no solution to the Israeli-Palestinian conflict in sight, he said, it’s going to be hard to solve the disturbances.

“Netanyahu is now in his element, because he gets to go out and say ‘We’re going to get tougher,’” he said. “The punishments have gotten worse, the jail terms more serious, but the desire keeps growing. So what are we fighting with? We don’t have a good solution.”